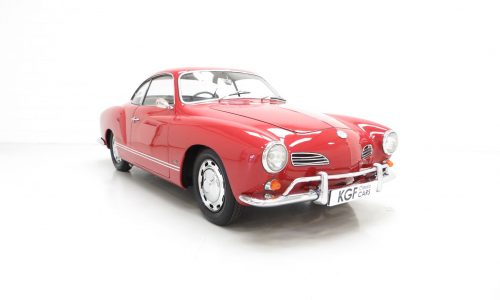 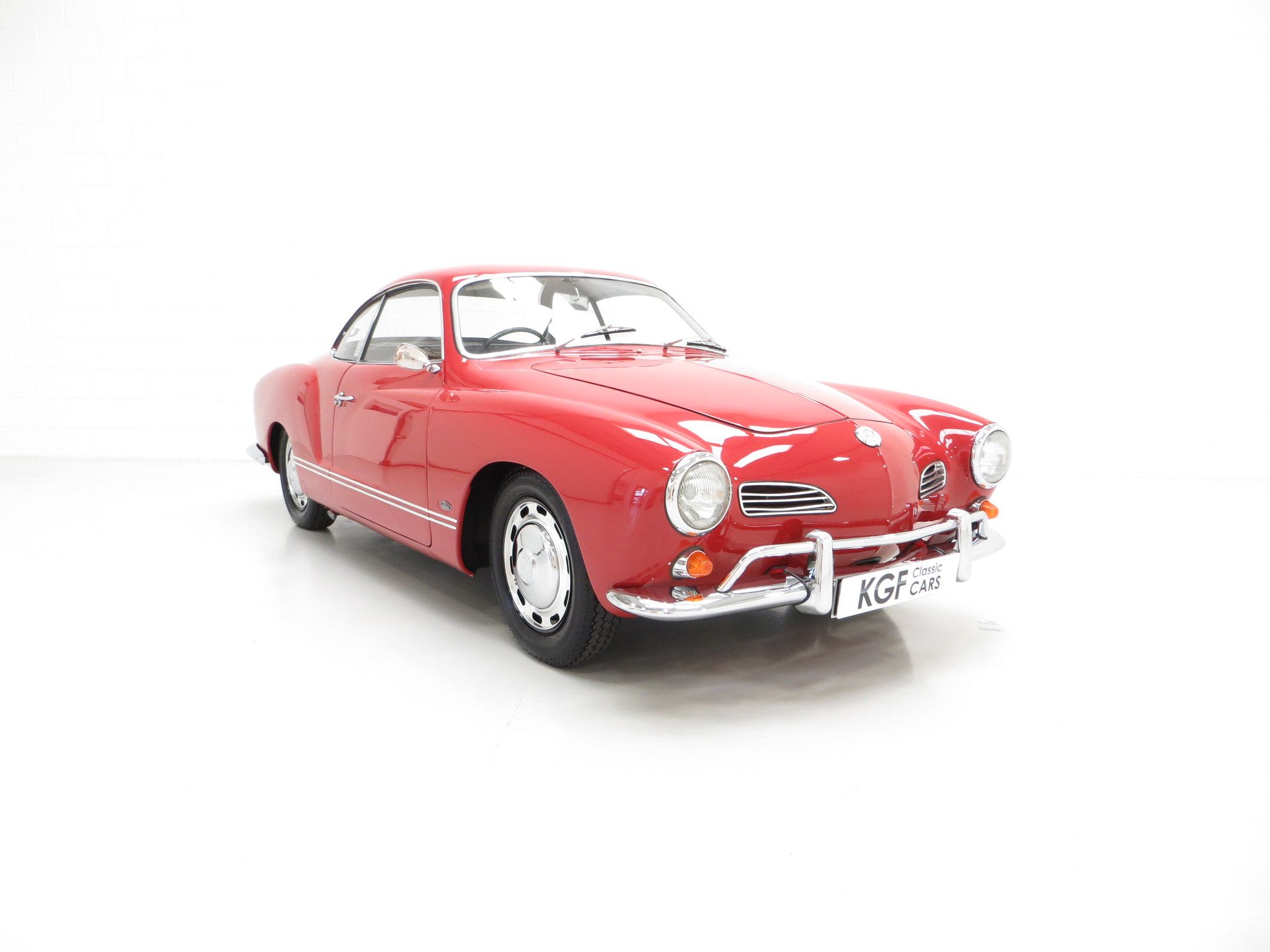 EXTERIOR
The astonishingly beautiful creation by Italian designer Carrozzeria Ghia and German coachbuilding house Karmann, the iconic Karmann Ghia was launched in 1955.  This 1966 example, finished in stunning Ruby Red, (Code L456), from factory Manila Yellow, is a multiple Concours d’Elegance winner having undergone a full body-off restoration in the mid 1990’s in the hands of air-cooled restoration experts, Bughaus of Nottingham.  Two boxes full of winning trophies hint towards just how special this car is, and physical inspection reveals just how stunning the paintwork, panel fit and overall finish is with just one miniscule ding to the nearside front wing.  All pristine chrome work has been subject to expensive professional refurbishment by Marque Restore.  All glass is factory fitment with number plate etching to each pane still present.  Meticulous attention to detail has been applied to every curve, line and feature of this car to include, trim, rubbers and the beautifully ornate Karmann Ghia badging.  In this case, a restoration costing far in excess of the cars value can only be undertaken for the true love of the car.

INTERIOR
The Black permeable leatherette upholstery has been recreated with no expense spared by leading interior expert Bernard Newbury, a name synonymous with quality and perfection within the world of VW upholstery.  The dash trim, which is unique to 1966 model year cars only, remains fitted to this example and as with the rest of the interior is in pristine order.  The styling attributes of this car seem endless and thankfully remain just as VW intended, even down to the fully operational VDO gauges and working clock to the ornate steering wheel with horn ring and Wolfsburg Crest which is slightly crazed with age.  Immaculate grey cord carpets are perfectly fitted and the perforated headlining is pristine.  A proven award-winning interior.

ENGINE & TRANSMISSION
An air-cooled 1600cc twin-port engine upgrade has been carried out to an exceptional standard both mechanically and aesthetically.  Lift the engine lid and it is easy to see why top marks for cleanliness have been awarded in the Concours d’Elegance categories.  No expense has been spared and there has been absolutely no compromise on the quality of parts fitted, as can been seen with the eye-wateringly huge collection of invoices in the history file.  The 4-speed gearbox performs exactly as intended and familiarisation is easy.

HISTORY FILE
This desirable 1966 model year Volkswagen Karmann Ghia was manufactured on 17th January 1966 as a RHD car and delivered to the supplying dealer in Ramsgate, England on the 20th January 1966, as confirmed by the official Birth Certificate issued by Volkswagen Classic Parts in Wolfsburg, Deutschland.  First registration was on 21st March 1966.  Referred as a Type 1 Karmann Ghia and internally is the Type 14, this example has undergone and full body-off restoration in the mid 1990’s.  A huge full documentation file for the restoration has been kept as well as literally hundreds of photographs in an album to leave in no doubt just how meticulous the work undertaken has been.  Evidence of work and parts supply from the leading names within the classic VW scene are contained within the colossal history folders and photo albums, perusal of such would take hours, as would the polishing of two large boxes of winning trophies!  In 2005 well known club member, Mr Barry Sidwell, purchased the car, and to follow was entries to countless trophy earning competitions, and a file in the folder contains judging score sheets for various Concours d’Elegance, including well know Stanford Hall, Stoner Park, BVF, ABOC and many more.  The vehicle has been featured in many copies of quarterly magazine, The Historic VW, and was valued by Mason Hogg of the Karmann Ghia Centre in May 2016 at £24,000.

Amongst the finest Karmann Ghia’s in existence worldwide, this example excels in every respect.