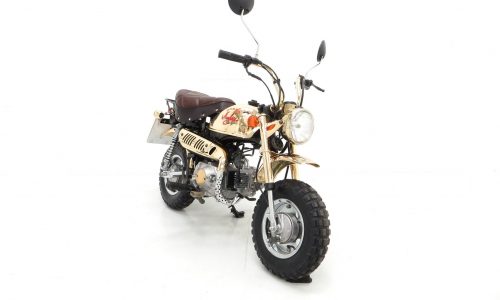 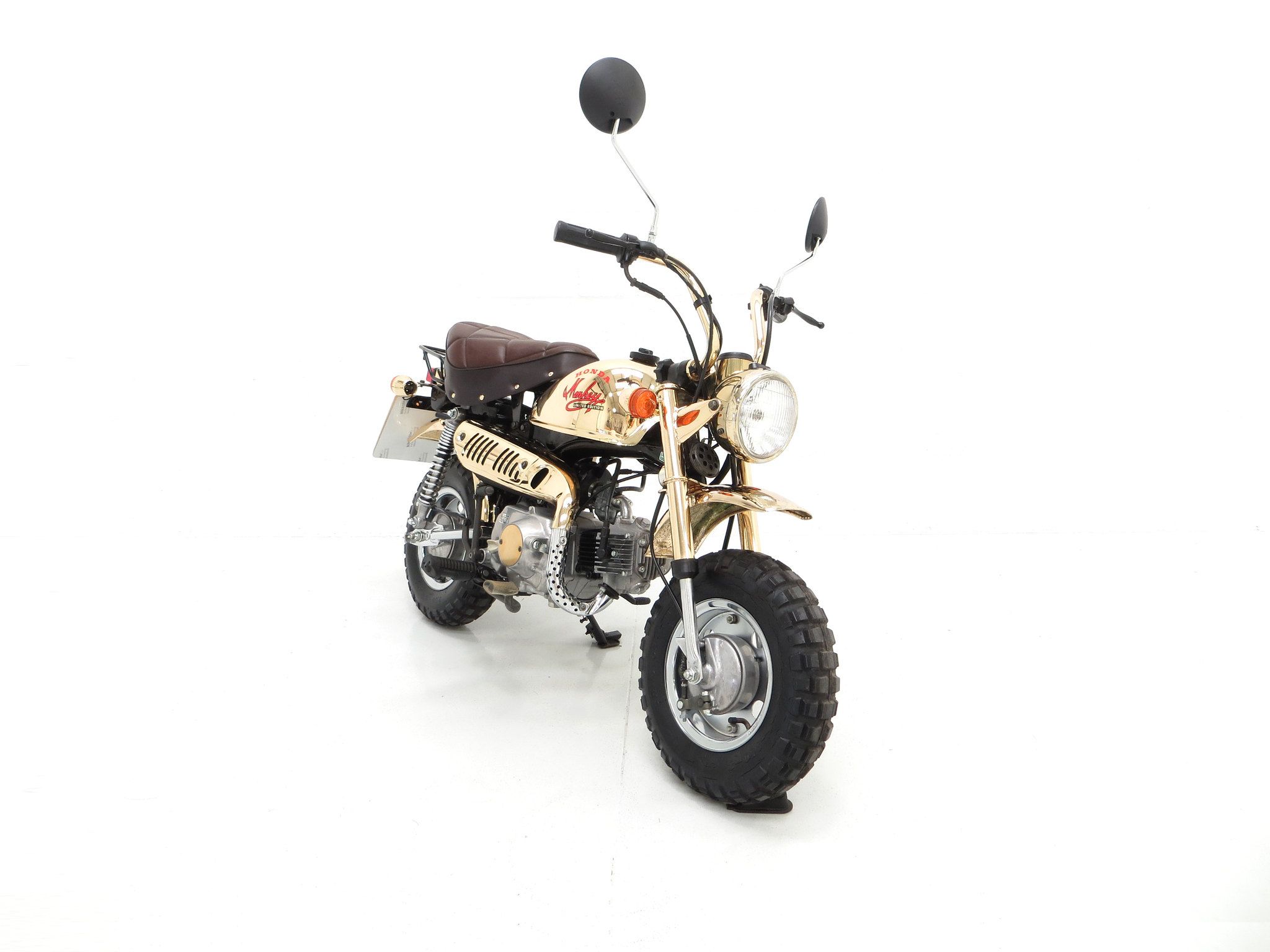 MODEL HISTORY
The Honda Z-Series was a line of mini motorbikes manufactured by Honda Motorcycles. Introduced in 1961 as the Z100, the bikes were originally produced as a children’s ride at the Tama Tech amusement park which was owned by Honda. In 1964 the minibikes, later renamed Z50, were put into mainstream production that was to last for over 50 years until 2017. The initially unofficial nickname of ‘Monkey Bike’ was soon widely accepted and referred to the ‘arms out/hunched over’ stance adopted by riders. The Gold Limited Edition coincided with the 20th anniversary of the original Z100 and featured an extensive special Gold Chrome finish.

EXTERIOR
Finished in the factory original Gold Chrome, this Honda Z50 Monkey Bike remained unregistered until 2019 and has covered just 1 mile in its entire lifetime! Recently discovered at the home of an elderly collector, the bike was covered in protective grease when new which has now been removed to reveal the stunning original finish. The teardrop fuel tank is amazing and retains the factory Honda Monkey Limited Edition decal. All other extensive Gold Chrome fitment is undamaged and in superb order with only some faint pitting visible, most notable on the front mudguard. Factory stickers and labels are present and correct and the stock frame number stamping is clearly legible. All trim, lenses, rubbers and plastic fittings are preserved and the foot brake still wears the factory protective plastic sheath! There are even remnants of the protective plastic wrapping on the mirror stalks! The original quilted waffle leatherette seat in brown with gold domed fasteners is perfect. A tiny speedometer with odometer is delightfully simplistic and reads just 1 mile! This is a very special limited-edition Monkey Bike.

ENGINE & TRANSMISSION
The AB27E, air-cooled, 4-stroke OHC single-cylinder displaces 49cc developing a thumping 4.5hp! Starting is effortless with the primary kick start and the engine runs delightfully quiet and functions as it should with fully working manual choke. The engine is spotlessly clean with all stampings and stickers clearly visible. The four speed one down three up manual transmission performs perfectly and is very easy to use. Collectable motorbikes do not get more special than this limited-edition delivery mileage machine.

HISTORY FILE
Discovered at the home of an elderly gentleman who had purchased the bike new but had never registered it, this unrestored Gold Special Edition has covered just 1 mile from new! Discovered by and purchased in 2017 by Mr David Bradley who at one point owned a collection of around 30 Monkey Bikes including James May’s 2004 example, the bike has now been registered on 14th February 2019. The first MOT was carried out on 3rd March 2019 with no advisories as expected. A letter from Honda UK dated 29th September 2017 confirms the manufacture details drawn from archive records. Information confirmed is the model Honda Z50JF, frame and engine numbers and build date of 2nd March 1985 at the Suzuka factory in Japan. Completing the history file is the DVLA registration documents as well as the V5 certificate, and two original Honda keys are also gold in colour with the spare still in its plastic sheath.

Honda announced in 2017 that the production of the Z50 ‘Monkey Bike’ was to cease, ending a lifespan of over 50 years and making these ever-popular minibikes highly collectable. This beautifully preserved, matching numbers example is the perfect addition to any collection, trendy publicity ornament or super-fun leisure bike.