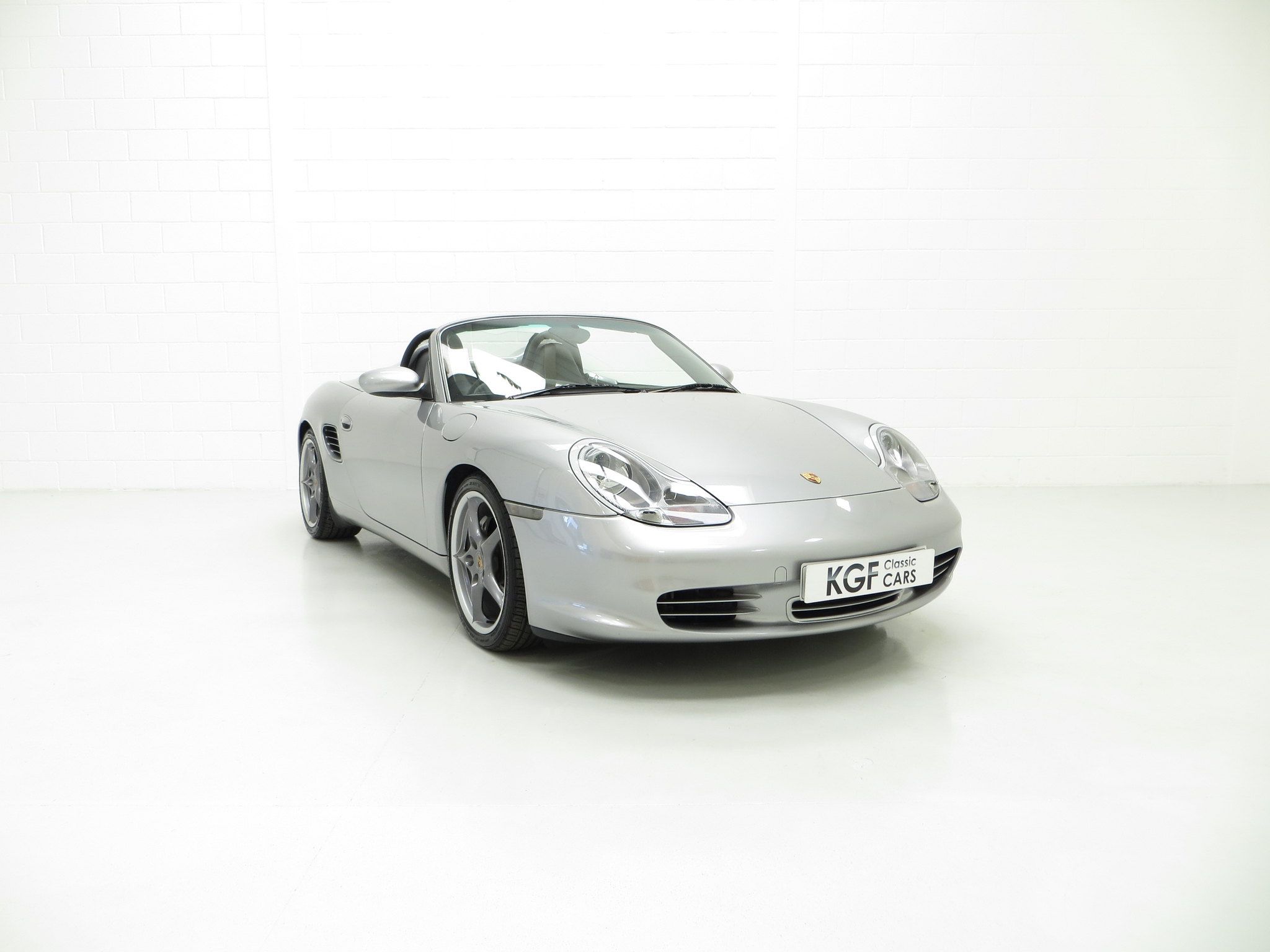 MODEL HISTORY
The Boxster S Anniversary Edition was the modern tribute to the artistry and innovation that defined the legendary Porsche 550 Spyder, the phenomenally successful racer that helped redefine the future of sports car design.  Built to commemorate fifty years since Ferdinand Porsche devised the original lightweight aluminium Spyder in 1953, just 1,953 Anniversary Edition Boxster S vehicles were built, all finished in unique GT Silver Metallic.  Porsche engineers endowed the cars with more power (264hp at 6,200rpm) and a re-engineered six speed gearbox with 15% shorter throw from standard models.  Additional styling notes to distinguish the Anniversary Edition include a stainless steel tailpipe flanked by silver mesh grilles, wheel spokes painted in Seal Grey with matching centres and coloured Porsche Crests and bright chrome rear boot lid badge.  An individually numbered plaque is placed on the centre console, this being number 1913 of 1953.

EXTERIOR
This exceptional example is finished in the only available colour, GT Silver Metallic paintwork, (Code LM7Z).  It harks back to the original ancestral lines of the curvaceous 550 Spyder, particularly with the optional Speedster Humps, with the styling cues and the unmistakable Porsche bloodline clear to see.  A virtually flawless factory finish is guaranteed to marvel even the most demanding scrutineer and the car is totally standard without exception.  The UV-resistant hood in Black (an option from the standard Cocoa Brown) is perfect in both operation and condition and the expensive optional hard top comes complete with stand and storage bag.  A very special example of the car built to celebrate a Porsche Icon.

INTERIOR
Exemplary craftsmanship and race inspired hallmarks in the form of the sculptured sports seats shrouded in Dark Grey rich natural leather, (Code U2), the upholstery is exceptional as to be expected from such minimal usage.  The original carpeting has been protected by dealer fitted over mats from new.  The leather surface dashboard and incorporated switchgear are in flawless condition, with all functions operating as intended.  Absolute originality is supported with factory stickers to door apertures, factory build label to the front bonnet underside and Mobil 1 sticker in the rear luggage space.  Exceptionally good in every respect.

ENGINE & TRANSMISSION
Fitted with the flat six Porsche Boxer Engine, namesake to the Boxster, this powerplant requires little introduction.  Porsche Engineers developed an uprated 264hp from the 3,179cc unit to allow 0-62mph in just 5.7 seconds with a top speed of 165mph!  The punchy sound delivered from the sonically tuned and exclusive to the Anniversary Edition exhaust system is guaranteed to set the pulse racing.  The re-engineered 6-speed manual transmission is short, sporty and incredibly direct having a 15% shorter throw compared to the Boxster S.

HISTORY FILE
Registered new on 1st August 2004 by Main Dealers, The Porsche Centre Edinburgh, the first registered keeper was Mr Steven Clubb and a Vehicle Order Form and New Vehicle Invoice confirms the price paid of £42,632.00.  Mr Clubb paid a further £799 for a personalised number plate with his initials and ‘BOX’ suffix which remains with the car.  After 10 years of ownership, Mr Melvyn Manning became the second and only other keeper.

All handbooks, guides and point of sale literature are housed in the black A5 Porsche wallet including the service booklet which has six Porsche Main Dealer stamped entries.  Two sets of Porsche keys plus the tag and master blade are present along with the new car presentation pack.  A further large history folder contains corresponding Porsche Main Dealer invoices as well as every MOT certificate from the first in 2007.  IMS bearing failure occurred in 2018 and a full rebuild using the approved upgraded components is fully documented with no expense spared mentality.  Acknowledged as a true collector’s item with only 150 RHD examples being made, (Source: Porsche World Magazine), this low mileage and low owner example remains exactly as Porsche intended and fulfils every collector criterium.