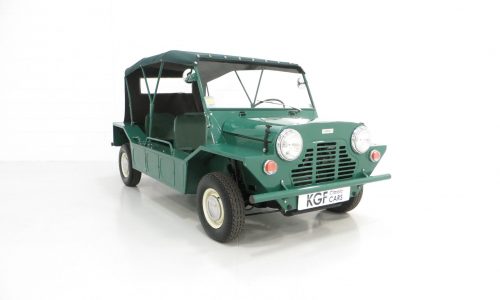 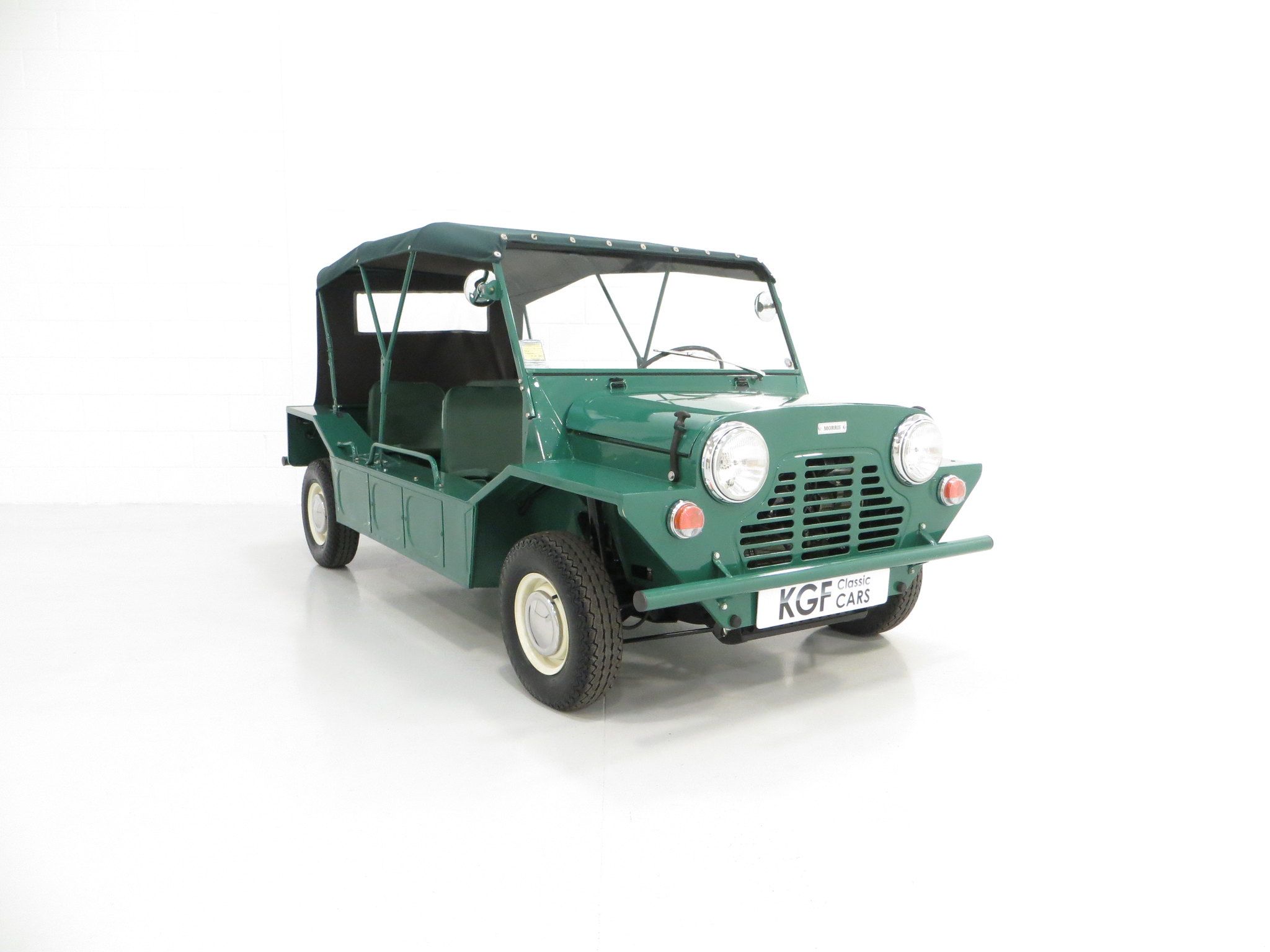 MODEL HISTORY
The British military, initially the Royal Marines were looking for a lightweight air-portable vehicle and the British Motor Corporation (BMC) devised the Mini Moke based on the underpinnings of Sir Alec Issigonis Mini design.  Prototypes were running by 1959 but feedback from military tests was lukewarm and despite revisions sales ended in 1963 mainly due to poor ground clearance and being under powered.  To recoup development costs the vehicle was turned into a civilian runabout with both Austin and Morris badges.  Production began in December 1963 at the Longbridge plant with most Mokes being exported to warmer climates and ceased in 1968.  Later Australian and Portuguese Mini Mokes were made until 1993 but it is the British built Mokes that are the most collectable.

EXTERIOR
Available in just one colour, Spruce Green, (Code GN13), this remarkable Mk1 Mini Moke is true to the original design having never been restored.  The pressed steel unitary construction allows easy viewing and purists will be amazed at all the factory spot welds and perfect panel overlays.  The strong tubular bumpers are unmarked with endcaps still attached and have been painted along with the body.  The detachable hinged bonnet and fold down windscreen are great Moke features along with the folding fabric covered roof.  Lucas headlamps with chromed headlamp bezels have a mirror finish and the correct Lucas L632 combined sidelamp and turn indicator, Lucas rear lights, Lucas reflectors and number plate illumination are all factory specification.   The correct body colour large knurled filler cap remains in place along with the rare factory optional sump protector.  One of the most fascinating Mini incarnations are extremely rare in this condition.

INTERIOR
Sparse, exposed and immense fun are terms that best describe a Moke interior!  Simplicity in all aspects treat the driver to basic controls familiar to most Mini owners with fresh air aplenty!  All the instruments, switches and warning lights function.  This example is fitted with the optional passenger and rear seats all with pristine linked cushions and securing tabs.  Optional rear grab handles are also fitted and the folding hood is in prime condition.  Wonderfully quirky.

ENGINE & TRANSMISSION
All the Longbridge built Mokes had the 848cc engine and incredibly this example is still fitted with the original factory supplied unit and is therefore a desirable matching numbers vehicle.  The beautifully clean engine bay is a show piece and originality seekers will be delighted to see items like the Coventry stamped radiator, Morris Motors car plate on the radiator cowling and Commission Number plate on the opposite side.  These identification tags are originals and not replicas.  The early Mini gearbox with no synchromesh on first gear and identified by a U in the engine number prefix is light, precise and an absolute joy to use.

WHEELS, TYRES & BRAKES
Pressed steel disc wheels finished in Old English White with 4-stud fixing are dressed in small chrome Mini hubcaps all in excellent condition.  Expensive brand new Dunlop SP Aquajet 145 SR10 tyres have been fitted including one to the rear mounted spare. Braking to all four wheels is hydraulically operated by a pendant pedal with two leading shoes at the front and Cooper S drums with built-in spacers to the rear.  All factory correct and in optimal working condition.

HISTORY FILE
This matching numbers British built Mk1 Morris Mini Moke was produced on the 25th February 1966 and despatched to Italy on the 16th March 1966.  The British Motor Industry Heritage Trust Certificate confirms the chassis number, engine number and body number all match, a most unusual and highly sought after aspect in such a car.  The vehicle was discovered by Saverio Fasulo, (the father of KGF Classic Cars company Director, Karl Fasulo), while holidaying in the Puglia region of Italy.  Being a car fanatic himself he heard of a small collection of cars with a wealthy individual in a small and idyllic village called Bovino.  The virtually untouched vehicle was residing with only this second owner from new, Mr Mario Buonassisi, who, after some persuasion agreed to sell it to Mr Fasulo.  On arrival to the UK Mr Fasulo has cherished this rare icon while reminiscing serving his Apprenticeship with BMC and refreshing the car in all areas!