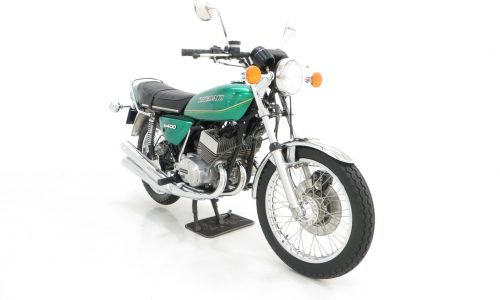 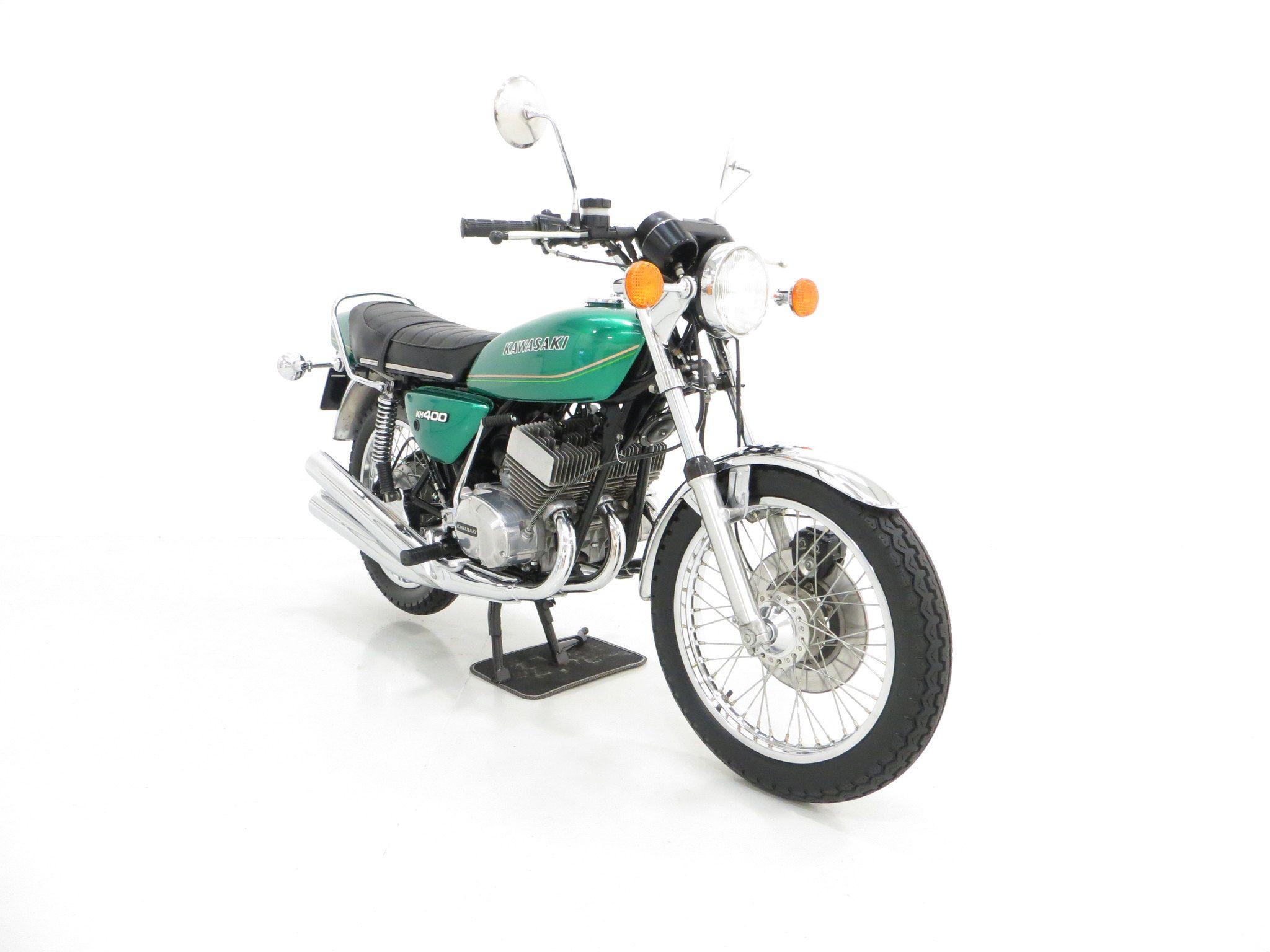 An unrepeatable Kawasaki KH400-A4 Triple with only 348 miles from new.

MODEL HISTORY
The Kawasaki KH400-A4 was part of the iconic Kawasaki ‘Triple’ range produced from 1968 to 1980 with motorcycles ranging from 250-750cc, the latter more powerful models being nicknamed ‘widow makers’ owing to Kawasaki’s penchant for producing large engine bikes but still with skinny tyres, flimsy frames and inadequate brakes!  Renowned as the ultimate all-rounder for performance and handling, the KH400-A4 was a rare and expensive machine and upholds the thrill of the famous Triple.

EXTERIOR
Finished in Candy Emerald Green, one of only two colour options available for the KH400-A4 model, this matching numbers example is unrivalled in originality due to the incredibly low 348 miles covered. The pristine factory original paintwork gleams and the tubular frame and telescopic folks unmarked.  The frame and engine numbers clearly visible for inspection and maintain the factory finish.  Likewise, the almost ornate asymmetrically arranged three branch exhaust system displays clear part number stampings and are absolutely correct.  Lifting the seat reveals further delights such as the original and complete toolkit in the plastic pouch, all manufacturer stickers and notices clearly intact and an unused set of three spark plugs still in their packaging!  The seat, grips and rubbers can all be described as excellent.  A truly exceptional example of the Kawasaki’s that took the 1970’s biking world by storm and suitable for the most demanding of collectors.

ENGINE & TRANSMISSION
The three cylinder two-stroke air-cooled engine has a 400cc displacement and produces 38bhp with a claimed top speed of 101mph.  Features such as the capacitor discharge ignition (CDI) and Superlube oil injection remain exactly as the manufacturer intended.  A 5-speed transmission incorporating primary drive by straight cut gear and wet multiplate clutch were all features of this model.  On the purchase of this machine in 2010 by the current owner the bike had a documented PDI, service, MOT and road test and has since formed part of a private static display and will require recommissioning before use.

HISTORY FILE
A fascinating history awaits the new owner of this motorcycle.  Delivered new in 1978 to Rhor & Son, Motorcycle Dealers in Belgium the bike was not sold due to a factory ignition fault.  Remaining unused and in storage it was sold by Rhor and Son in May 2003 to a Mr D Ferriday of Solihull with a delivery mileage of just 3 miles.  It had an MOT and was UK registered at this time.  In July 2003 the bike was purchased by Classic Bikes Ltd in Market Drayton with 332 miles and was sold by them to a good client, Ally McKever, who at the time had a collection of over 60 Japanese machines.  Ally was the sponsor of the Scottish Classic Bike Show and the bike was displayed at various shows and events.  The display sheet is included from this time. Sold back to Classic Bikes Ltd in early 2010 with 347 miles the bike was duly snapped up by the current owner and bike collector, Mr Chris Harvey.  The sales invoice reveals the price paid and that a PDI, service, MOT and road test was carried out prior to the sale for Mr Harvey.  The bike has since remained in a static Kawasaki Triple display alongside other motoring greats and now has only 348 miles recorded.  This KH400-A4 is an absolute must for the avid collector where inspection will not disappoint.  A rare unmissable opportunity indeed and a certificate of proof from The Classic Kawasaki Club is included in the history file.