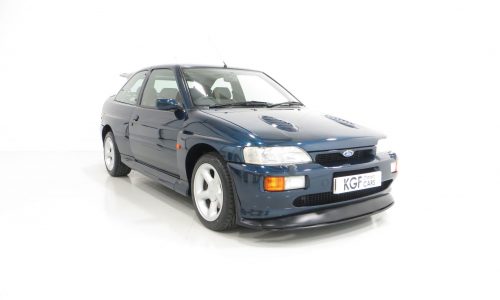 EXTERIOR
The breath-taking exterior of this Escort RS Cosworth is nothing short of magnificent.  Finished in rare Petrol Blue Metallic, (Code C5), a colour only produced for 13 months.  The paintwork boasts an impeccable shine, commensurate with a 25,933 mile, two owner cherished example with the second owner since the car was just two years old.  A tiny rub to the passenger door mirror and miniscule frontal stone chips are visible on an otherwise outstanding finish.  All exterior trim, lights, badges and rubbers are excellent and the correct Ford window stickers and Ford Security System stickers remain fitted as well as the supplying Ford Main Dealer number plates.  The vulnerable to damage adjustable splitter to the lower front spoiler is fully intact.  A preserved underside featuring a standard exhaust and original factory Motorcraft labels to suspension components will delight originality seekers.  An amazing and unmolested example of this Ford RS legend.

INTERIOR
The interior of this Escort Cosworth is fantastic and spotless.  The Recaro seats are finished in the optional Raven Leather, (Code LW), and are immaculately clean and free from wear.  The seat bases and bolsters remain tight and have retained all shape, and even the delicate piping to the seats have avoided the wear commonly suffered in other examples.  The standard Ford radio/cassette, Model 2007 RDS sound system remains operational and a Clifford alarm has been fitted.  The boot area is pristine and houses the factory fitted space-saver spare wheel and correct jack with carpeted covers.  An impeccable RS interior, totally original and unspoilt.

ENGINE & TRANSMISSION
The RS Cosworth powerplant warrants little introduction.  Fitted with the factory standard Generation Two Ford EEC IV electronic engine management system and Garrett AiResearch T25 turbocharger and intercooler, the motorsport pedigree of this car is obvious.  With an impressive output of 217HP, the car accelerates rapidly through 0-60 in 5.7 seconds and reaches a top speed of 144mph.  The pristine engine bay is exactly as Ford intended and displays factory seam sealer and spot welds to the wings along with original plates, stickers and stampings to pass strict Ford aficionado scrutiny.  The permanent Ferguson four wheel drive system with 34/66% front/rear power split mated to a MT 75 5-speed gearbox is a delight.

HISTORY FILE
Assembled in December 1995 at the Rheine Assembly Plant in Germany, this factory specified Luxury model was registered new to its first owner on the 18th December 1995 by Ford RS Agent Tristar Tildesley of Walsall.  The first owner was Mrs Beryl Ward and the incredible low mileage of 25,933 miles has been covered in the majority by the second and only other keeper, Mr Robert Whordley, who has owned the car since purchase in 1998.  The original Ford wallet contains all handbooks and guides, dealership literature and spare keys including red master key.  A collection of early MOT certificates and an invoice in the history file for £1,108.25 dated November 2018 details a major service including transmission oil, cambelt, tensioner and water pump, brakes discs and pads all round and full inspection.  This was carried out by renowned Cosworth expert Harvey Gibbs of Supreme Car Services to ensure safe usage after an extended period of storage.  An extraordinary example and worthy of the best Ford collections.