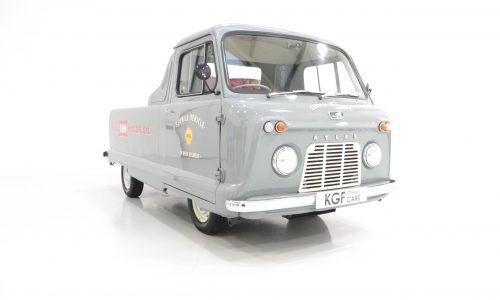 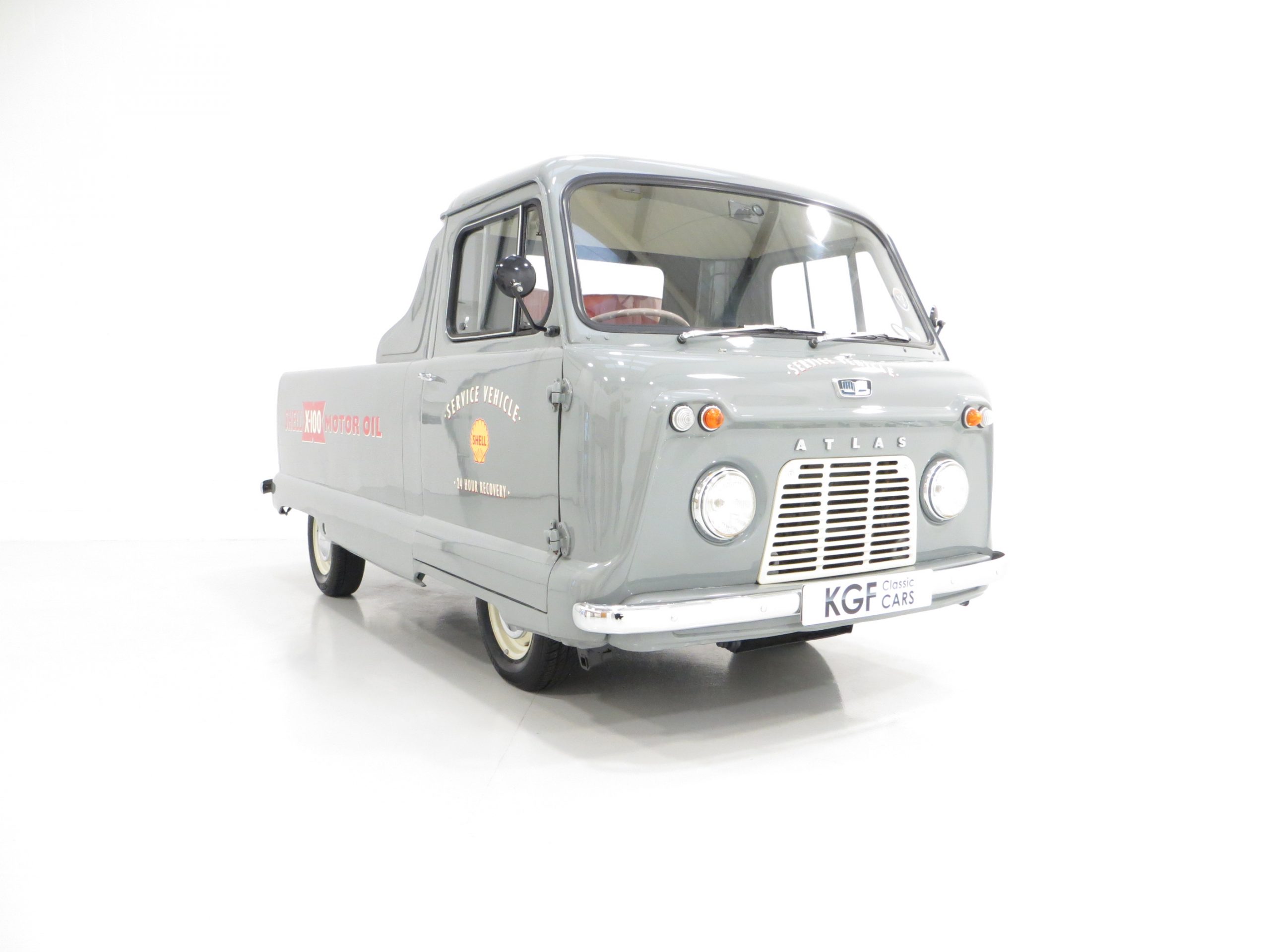 EXTERIOR
This delightful Standard Atlas Pick-Up, made in 1959, is a very rare surviving example of the light commercial van and pick-up range introduced in 1958. Like its competitors, the BMC J-Type, Morris J2, Ford Thames and Bedford CA, the Atlas utilised engine and running components from the passenger vehicle within the manufacturers range, in this case the Standard Ten. Finished in the original colour of Pearl Grey, this fantastic pick-up has been recreated as a Shell Service vehicle to amazing effect. The paintwork and period decals are finished to a very high standard and two immaculate oil drums in the goods floor protected by rubber matting complete the look. Attention to detail is superb with all original badges fitted and the trim sections and chrome in brilliant order. With classic commercials vehicles highly sought after and in short supply, this rare Atlas Pick-Up is guaranteed to attract much admiration at shows.

INTERIOR
Amusingly, this example is specified to a high standard with factory options to highlight just how sparse commercial vehicles used to be, where even a passenger seat and second windscreen wiper were extra! The driver and optional passenger seat are finished in Black Vynide washable coverings and are pristine. A reflection of the sparse trim is highlighted by an expanse of painted metal which thankfully matches the Pearl Grey exterior both in terms of colour and excellent finish. Originality can be appreciated in the factory steering wheel, floor mounted headlamp dipswitch, original knobs and the centrally positioned 5” instrument dial. The indicator switch mounted to the steering wheel centre remains fitted but has been bypassed to a column mounted unit. An amusing lack of ergonomic consideration is highlighted by the ignition, choke and starter pull switch located behind the driver on the engine cowl, and the huge wand like gearstick protruding clumsily from the same place! A wonderfully nostalgic place to be with an air of sympathy for van drivers of yesteryear and appreciation for the comforts we have today!

ENGINE & TRANSMISSION
Fitted with the correct 948cc four-cylinder Standard 10 passenger car engine, as confirmed by the engine code, the power output was quoted at a rather pedestrian 35bhp with top speed of 52mph! The notion adopted by Standard of fitting a small engine for improved economy was compromised by users who found that performance was so slow when fully laden that the engine had to be revved hard to achieve real progress, thus lowering fuel economy. Standard were later acquired by Leyland Motors in 1963 who duly introduced the larger unit from the Triumph TR4 improving the situation considerably. The four-speed gearbox features synchromesh on the top three forward gears, and despite operating perfectly requires some practice and a sense of humour to master!

WHEELS, TYRES & BRAKES
Disc-type steel wheels with chrome hubcaps are immaculate with very few markings, are all four tyres are matching period Kumho Powerstar Radial tubeless of size 175/80 R13. Braking to all four wheels is hydraulically operated by a pendant pedal with front 9in and rear 8in drums, all in excellent working order but of course fall short of modern standards!

HISTORY FILE
This wonderful example was registered new on 15th September 1959 and very early paperwork suggests the supplying dealer as C. and L. Barter of Golden Springs Service Station in Dorchester with first owner Mr Leslie White of Tolpuddle, Dorset. A period BP Energol Lubrication wallet holds original service charts dating back to 1961 for this vehicle. Research has found that this pick-up was originally supplied in Pearl Grey and painted in protective bitumen when almost new, thankfully keeping rust at bay. In 1980 the vehicle was laid up in a barn where it remained until 1995 when purchased by Keith Oliver. An extensive restoration took place whereby the bitumen was stripped away and the vehicle repainted in his company colours before reverting back to the original colour of Pearl Grey. Numerous show events have been attended since with the pick-up gaining many awards and no less than 18 trophies as well a magazine features. Prominent awards include the Coventry Festival of Motoring Made in Coventry Award, 1st place in Standard National Rally and the Footman James Best Light Commercial.

This special pick-up has more recently been a period feature of the Goodwood Revival Shell Service Station in 2015 and 2017. A history file accompanies the vehicle and includes an original sales brochure, practical maintenance handbook, workshop manuals volumes 1-6 as well as parts catalogues. A VHS tape of the restoration will delight those who still have a video player, and magazine features will suffice for those who do not! A wonderful vehicle reminiscent of Britain’s working heritage.