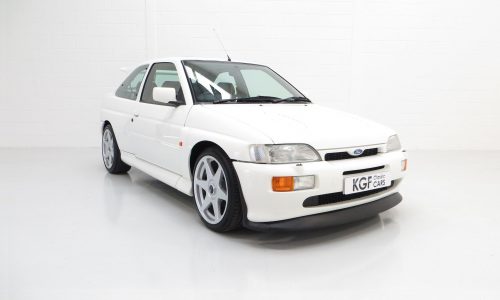 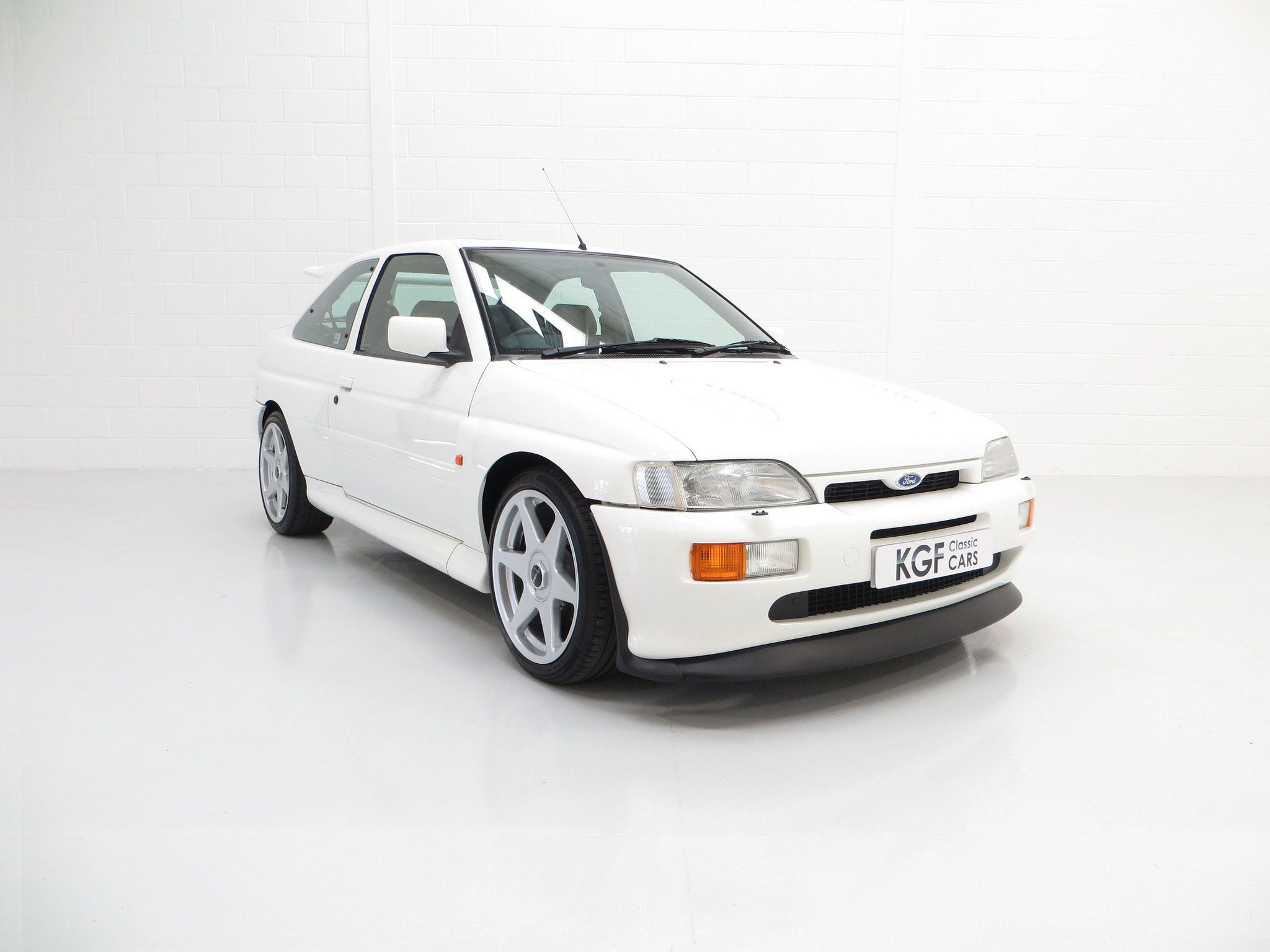 MODEL HISTORY
The Ford Escort RS Cosworth was a sports derivative and rally homologation special of the fifth generation Ford Escort. It was designed to qualify as a Group A car for the World Rally Championship.  It was available as a road car from 1992-96 in limited numbers from Ford’s Specialist Vehicle Engineering, (SVE), team.  It combines the hand-assembled engine expertise of Cosworth and the coach-building crafts of Karmann.  In order to accommodate the larger Cosworth engine and transmission Ford developed the car around the chassis and mechanicals of its predecessor, the Sierra Cosworth.  A very rare car with only 7,145 examples being produced and this one of the desirable early 2,500 built for homologation.  (Source Wikipedia, 1995 Edition One RS Brochure and the RS Owners Club).

EXTERIOR
The striking exterior of this Escort RS Cosworth is nothing short of remarkable.  Finished in iconic Diamond White, (Code B2), the paintwork boasts a brilliant shine and uniform colour match between panels.  Early homologation clues such as the exposed petrol cap and larger door mirrors remain fitted.  All exterior trim is in excellent order including the factory original light units.  The chrome on the rear tailgate badges has worn thin on the corners and rubbers are in good condition.  The black lower splitter is undamaged and the underside is very clean with a coating of Waxoyl.  A rare sporting Ford.

INTERIOR
With a majority of components being built specifically for the RS Cosworth this is a privileged place to be.  The Recaro seats are finished in optional perforated Raven leather and are in very good condition commensurate with the low mileage covered.  The cut-pile carpets have been protected by genuine Ford rubber mats.  The comprehensive and sophisticated instrumentation has beautiful dials with black detail on a white background.  A boost control switch, immobiliser and Collins turbo gauge are fitted.  The Ford FD 2007 radio cassette is the correct unit but the CD unit is an earlier Ford item and a led has been removed. Being one of the first 2,500 cars the pristine boot area still has the water injection kit never plumbed in and unused to comply with homologation. Most were removed by the Ford dealer to avoid customer confusion but fortunately this has remained with the car.

HISTORY FILE
Built at the Rheine Assembly Plant in Germany in September 1992 and registered new on the 7th October 1992 by the Ford Motor Co themselves making this model one of the highly sought after and early 2,500 Big Turbo homologation specials.  A further five former keepers have cherished this example, one of which was Mario Caira, a respected Cosworth racing driver who had this car as his own personal vehicle.  The current custodian, Mr Fitzpatrick, has known the car for 18 years and was fortunate to purchase it in 2004 from a friends mother when the car had a four digit personalised registration number.  This car was her pride and joy with the daily car being a Ford Sierra Sapphire RS Cosworth!  Mr Fitzpatrick used the car sparingly and has created a personal memoir of his ownership which includes the vehicle being used at Road Shows to educate school children on road safety and photographs of the car when it was in storage in a Carcoon.  A full service and cambelt change has just been carried out by Harvey Gibbs at Supreme Car Services in July 2018 at 48,413 miles.  All book packs are present including the original service book, old MOT certificates and two sets of keys.