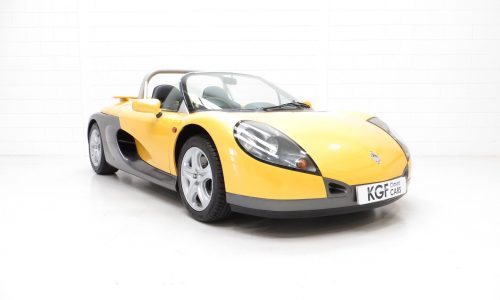 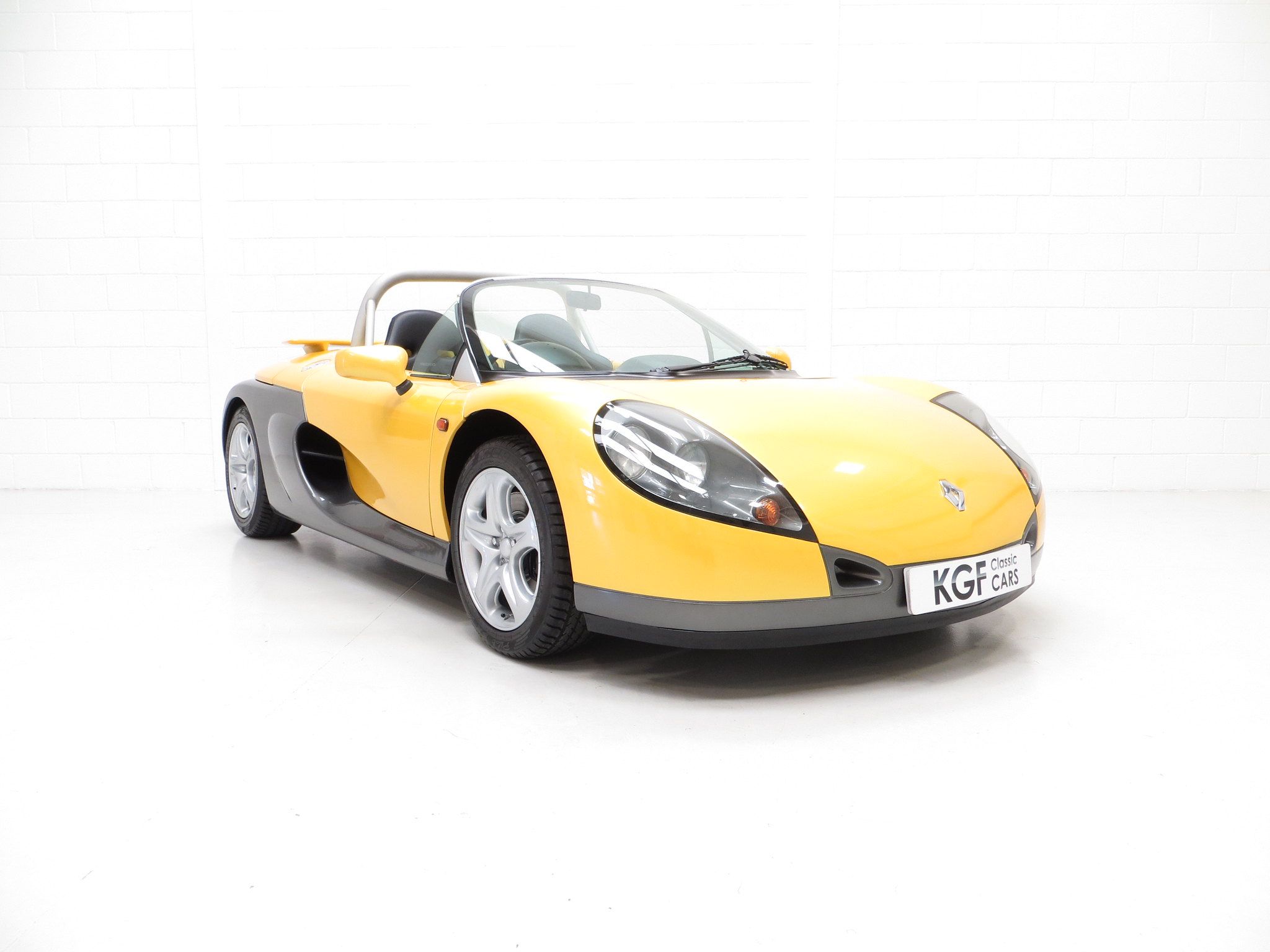 One of 100 UK RHD Renault Sport Spiders with an incredible 2,528 miles.

MODEL HISTORY
Innovative aluminium construction, suspension and underpinnings of a pure race car, power from the hottest of hatchbacks, no side windows, no door handles and tiny production volumes totalling just 1,685 units are all features of a specialist car builder and not from one of Europe’s biggest mass producers.  That is the appeal of the Renault Sport Spider unveiled at the Geneva Motor Show in 1995 and built at the Dieppe factory, home to the famous Alpine marque, between 1996 and 1999.  The UK market only imported the windscreen version rather than the aeroscreen and only 100 right hand drive cars were produced.  From the beginning a special one-car racing series for a purpose built Spider Trophy edition was designed.  This ran for several years as support to the British Touring Car Championship with famous drivers such as Jason Plato, who won 11 out of 14 races in the inaugural year of the UK Spider Cup.

EXTERIOR
The arresting two-tone colour scheme finished in desirable metallic pearlescent Sports Yellow, (Code 535), looks incredible and can trace its heritage to the Laguna concept car in 1990.  The smooth pebble-like design is uncluttered and muscular with large air-gulping side scoops and attention grabbing ‘beetle-wing’ cantilever doors.  Having covered an amazing 2,528 miles, the original condition is virtually flawless and the desirable all-weather kit as new.  Close scrutiny will reveal nothing other than miniscule markings and a tiny scratch to the front clamshell on the offside.  The jacking point red triangular guide stickers are still attached and the heated front screen has the chassis etching and Renault service sticker.  An entirely hand built car and so rare.

INTERIOR
A definitively sparse and simplistic ‘back to basic’ feel with a modern, minimalist and uncluttered look.  Two fabulous Recaro race-style bucket seats offer the perfect degree of lumber and lateral support and are trimmed in waterproof PVC coated knitted fabric with the side parts finished in matt and the central panel featuring a flecked metallic motif in mottled grey, all in perfect condition.  Adjustment of the seats and the drilled aluminium pedals via a knob located beneath the dashboard ensures the perfect driving position.  Anodised aluminium of the dashboard crossbar and gear knob nicely offset the body-coloured interior panels and the aluminium chassis and cross member are left exposed with only tiny markings visible.  All instrumentation functions and looks stunning set in an aluminium-finish bezel contrasting with the futuristic dash top digital displays.  As with the rest of the interior, the silicon carbide-reinforced PVC floor covering has no wear and the original Renault Sport steering wheel displays natural veins found only on super low mileage examples.

ENGINE & TRANSMISSION
The engine located transversely amidships is the tremendous 4-cylinder DOHC 150 bhp 16 valve 2.0 litre F7R Clio Williams engine with 0-60mph quoted at 7.05 seconds and a top speed of 134 mph.  Presented in factory standard guise with the optional performance exhaust and immaculate in appearance.  As with the engine, the 5-speed gearbox is mounted transversely and features effective pendulum suspension to prevent vibrations being transmitted through the chassis.  Quick, direct and perfectly reactive to the responsive engine.

HISTORY FILE
This UK RHD Renault Sport Spider is one of just 100 examples made and was supplied by Renault Main Dealers, S.R.Baber of Tonypandy, Wales.  With just three former keepers, long term owners from 2000 to 2016 were husband and wife, Mr and Mrs Jackson.  Mr Jackson purchased the Spider in 2000 at just two years old whereby upon his passing, the car was registered in his wife’s name, Mrs Linda Jackson-Hookins.  In 2016, the car was purchased by Renault Spider collector, Mr Nigel Turner, who has owned several examples and whose enthusiasm and knowledge of the model is vast.  He even commissioned a flocked hardback book featuring this actual car!
Every conceivable brochure produced for the Sport Spider, hardback books, original Renault Press Pack and Press Launch literature has been collected in the history file including one for the rare Laguna Project headed by Patrick Le Quement.  The vehicle handbooks and service book are housed in the factory supplied aluminium briefcase often held back as a souvenir and two sets of Renault keys are supplied.  Unrivalled pleasure and a significant part of automotive history.  A collection of Renault Main Dealer and specialist invoices and receipts are held in the history file including a documented Cambelt change in 2016 at 2,516 miles.  A true collectors piece.