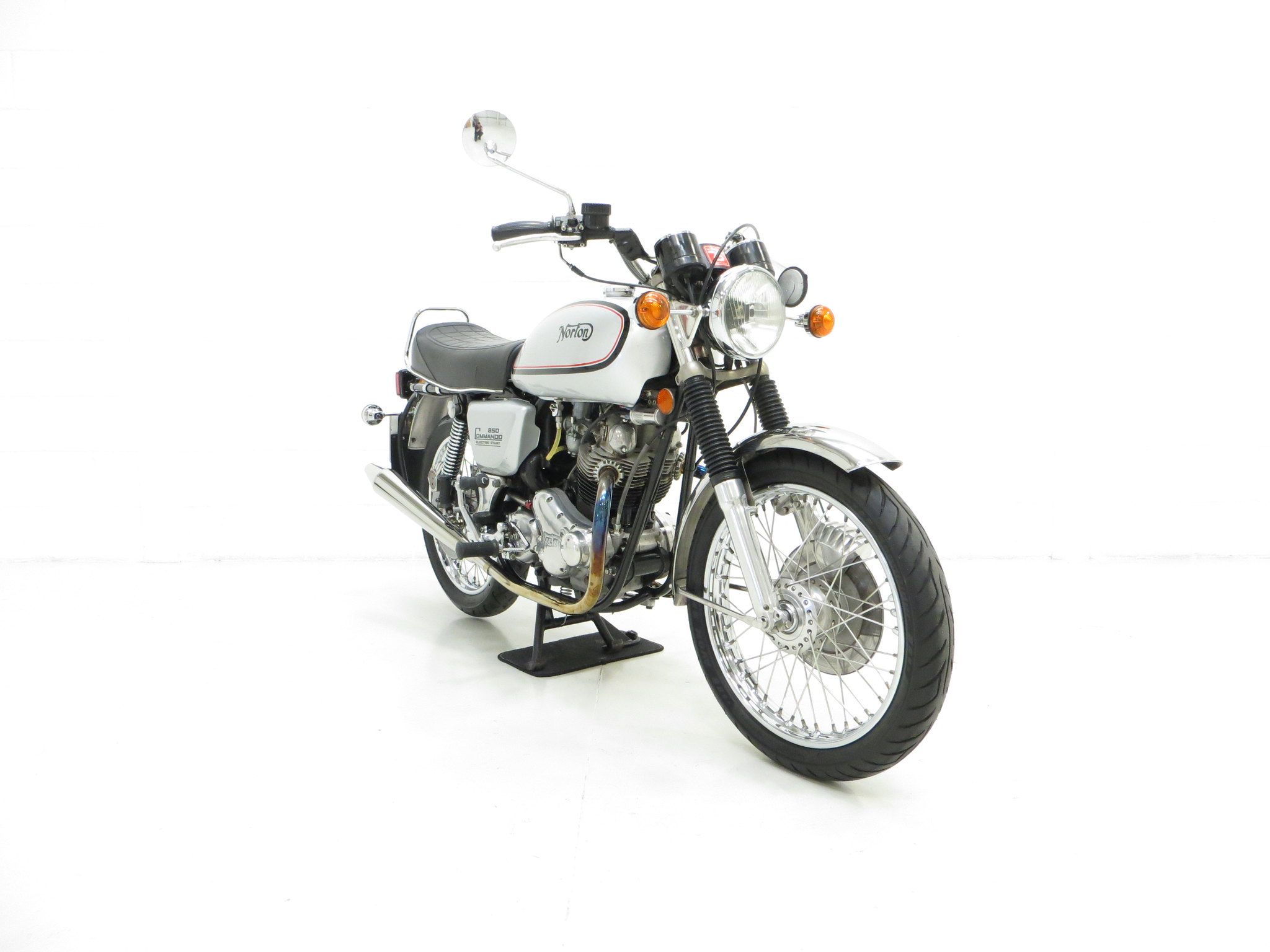 EXTERIOR
This muscular Commando 850 Interstate model, built to succeed in the US market, featuring left foot gear change and the large 5.5 Gallon tank was designed specifically to appeal to customers in the States, where long range touring is of considerable importance. The appearance of this motorcycle is fantastic with the large Silver tank displaying a bright polished shine with correct Norton lettering and decal. There are very light rub marks to the rear of the tank, barely visible, and the frame is in superb order with the stock stamping clearly legible. All original Norton trim pieces, rubbers and lights are in excellent order with only light aging apparent to the gauge cowls and some switchgear. The stainless steel and chrome pieces are original fitment and remain bright with only light markings. The original material to the large contour seat is in superb order with only one tiny nick to the rear. An unrestored bike that has been used, enjoyed and cherished by the same owner since it was five years old!

ENGINE & TRANSMISSION
The beating heart of this formidable machine is the air-cooled 828cc OHV vertical twin with an aluminium one-piece cylinder head, forged aluminium alloy connecting rods and aluminium pistons. Electronic ignition and electric start are a feature of this 1977 Mk3 model and have been retained as intended. Performance is quoted of 60bhp at 5,900rpm and during official testing, a standing quarter mile was completed in 12¼ seconds while reaching a terminal speed of 103mph. The engine is very clean and crucially it performs flawlessly having been subject to fastidious upkeep for regular long-distance touring by the now retired long-term owner. The original restrictive exhaust silencers have been replaced by accepted authentic upgrade cans which sound incredible. The wide tooth four speed gearbox with medium-close ratio is well suited to touring and operates exactly as it should with a light clutch action.

WHEELS, TYRES & BRAKES
Chromed rims with plated steel spokes laced to aluminium hubs are clean and very bright with minimal aging evident only upon close scrutiny. Matching quality brand Avon tyres, 90/90 19 upfront and 100/90 – V19 at the rear show ample tread and good rubber condition. This Mk3 model features one of the most significant revisions over previous models, in the form of hydraulically operated disc brakes to both front and rear wheels with Norton-Lockhead callipers providing excellent stopping power.

HISTORY FILE
Supplied new on 29th April 1977, this awesome Norton Commando 850 Interstate Mk3 has had just three keepers from new, the current custodian having owned it since 1982! Mr Andrew Hughes Pratt purchased the bike in 1982 and has since enjoyed it as part of his small collection which has also featured a Norton Atlas 750 and a vintage BSA. During 36 years of ownership, this Norton has taken both him and his wife on countless tours of the UK and the European Continent, covering thousands of joyous miles. Fastidious upkeep of his pride and joy was both a pleasure and a necessity, as the intention was to keep the bike for many years and use it regularly, which is exactly what he did!

The huge history file is equally as impressive as this machine looks and performs, whereby perusal of such would take considerable time alone. A large folder containing masses of receipts and invoices as well as virtually all MOT certificates dating back to 1983. The current, previous and early blue V5 documents have been kept as well as even dispatch records from Andover Norton. A lead-free conversion certificate is included in the history file to offer reassurance. The current custodian is a passionate Norton collector who has used this machine exactly as Norton intended and is willing to share his knowledge with any would be new owner hoping it will find an appreciative custodian.