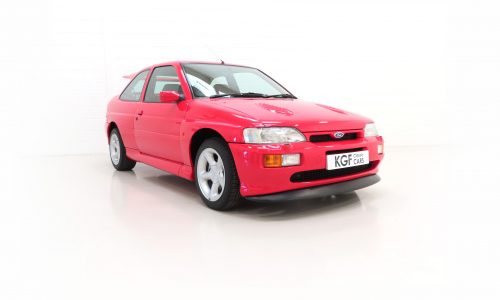 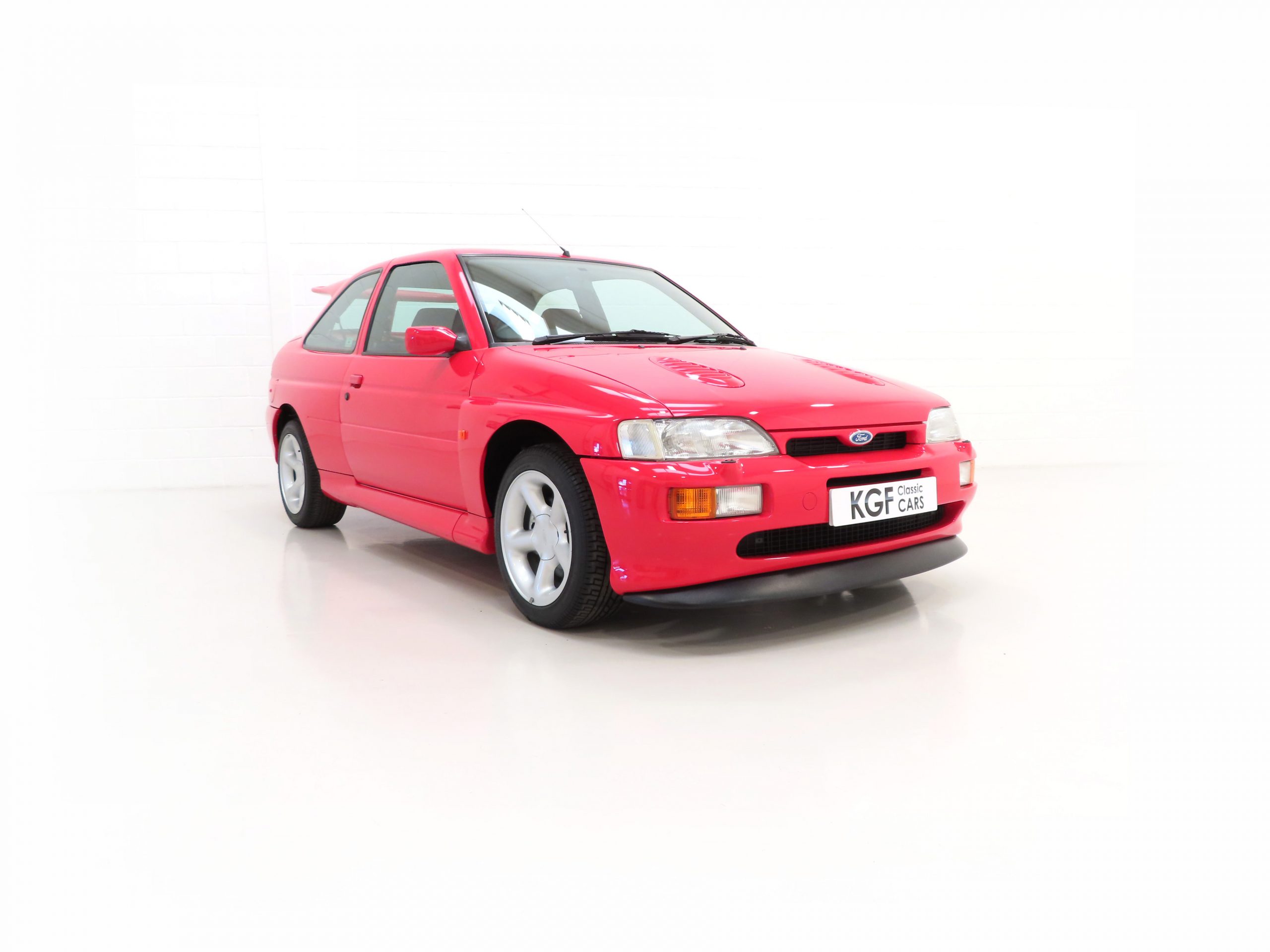 The most incredible Ford Escort RS Cosworth with only 217 miles from new.

MODEL HISTORY
The Ford Escort RS Cosworth was a sports derivative and rally homologation special of the fifth generation Ford Escort. It was designed to qualify as a Group A car for the World Rally Championship. It was available as a road car from 1992-96 in limited numbers from Ford’s Specialist Vehicle Engineering, (SVE), Group. It combines the hand-assembled engine expertise of Cosworth and the coach-building crafts of Karmann. In order to accommodate the larger Cosworth engine and transmission Ford developed the car around the chassis and mechanicals of its predecessor, the Sierra Cosworth. A very rare car with only 7,145 examples being produced with this example being one of the last. (Source Wikipedia, 1995 Edition One RS Brochure and the RS Owners Club).

EXTERIOR
With 200 hours detail development in Fords own Cologne wind tunnel the rally-bred innovation of this Standard Edition model is unmistakable and outwardly exhilarating. Finished in unmarked Radiant Red, (Code P 2), the finish can be described as impeccable thanks to the ultra-low mileage and indoor storage. The black lower bumper extension is unmarked still with PDI chalk marks and a front air splitter and wheelarch deflectors have never been fitted from new. All glass, lights and trim are factory fitment and in perfect condition. The underside of this 217 mile wonder is astonishing. Every label, sticker, tag and paint dab is visible. The light application of wax applied at the Rheine Assembly Plant have never been removed and this example is absolutely the blueprint to Fords scintillating Escort RS Cosworth.

INTERIOR
The interior of this late production Escort RS Cosworth is as new and exactly as Ford intended. The body-hugging Recaro seats finished in Raven with Pimento Red Hexagon Cloth, (Code 09), are sublime with complete fullness. Graham Goode carpet mats were fitted by Graham himself protecting the carpets and all trim, door cards and headlining is perfect. Turning the ignition on reveals all electrics operational including the Ford 2007 RDS radio/cassette still with the Keycode P1COS. The rare Standard Edition model has none of the Luxury Edition specification so manual windows, manual door mirrors and other equipment omissions are correct. Incredibly special and a collectors dream come true!

ENGINE & TRANSMISSION
The powerful and well proven Cosworth 2.0 litre 16v turbocharged YBT engine features the Garrett T25 hybrid turbocharger. Its lower rotor inertia, higher gas velocities and revised overboost strategy reduces turbo lag and improves drivability. 220bhp is quoted with 0-60mph obliterated in 5.7 secs and a top speed of 140 mph. It must be noted that this example has remained untouched and requires a full recommission. Please see options in the History section. The permanent Ferguson four wheel drive system with 34/66% front/rear power split mated to a MT 75 5-speed gearbox is a proven combination.

HISTORY FILE
This iconic Ford Escort RS Cosworth Standard Edition was built in October 1995 at the Rheine Assembly Plant in Germany and registered new on the 1st August 1996. It is one of the final examples made and was supplied to the first of only two keepers, Mr Graham Derek Goode by main dealers, Brooklyn Ford of Redditch. Mr Goode, (Managing Director of Graham Goode Motors Ltd in Leicester and renowned RS Specialist), purchased the car as an investment and it was one of the last ones available that could registered on a ‘P’ registration. He immediately put his personalised registration number on the car P1COS, a Graham Goode Racing sticker on the tailgate and Graham Goode carpet mats, all still present except the personalised plate. The car was displayed a few times and owned by him until 2010 when purchased by the only other owner and serial Ford Collector. There is an invoice in the file from the sale in 2010 and a photo of Graham Goode himself with the car when new. A recent email dated 2nd March 2022 from Graham confirms his ownership and all the detail.

It must be noted that this example will require fully recommissioning as it remains untouched with 217 miles. KGF Classic Cars are fully prepared to absorb the cost of this with Graham Goode Motors should the new owner wish. We are sympathetic that this may not be desired and the choice will be entirely the new owners.

All keys and all Ford handbooks are supplied and tax disc from 1996 along with a new car sales brochure and original Graham Goode key fob. KGF Classic Cars are honoured to be associated with this historically significant Ford Escort RS Cosworth.