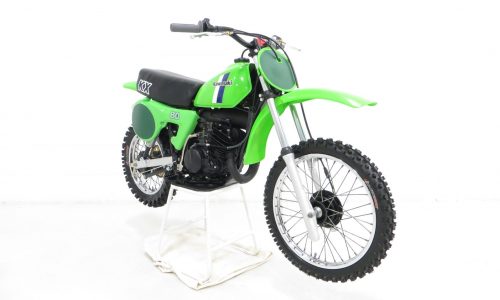 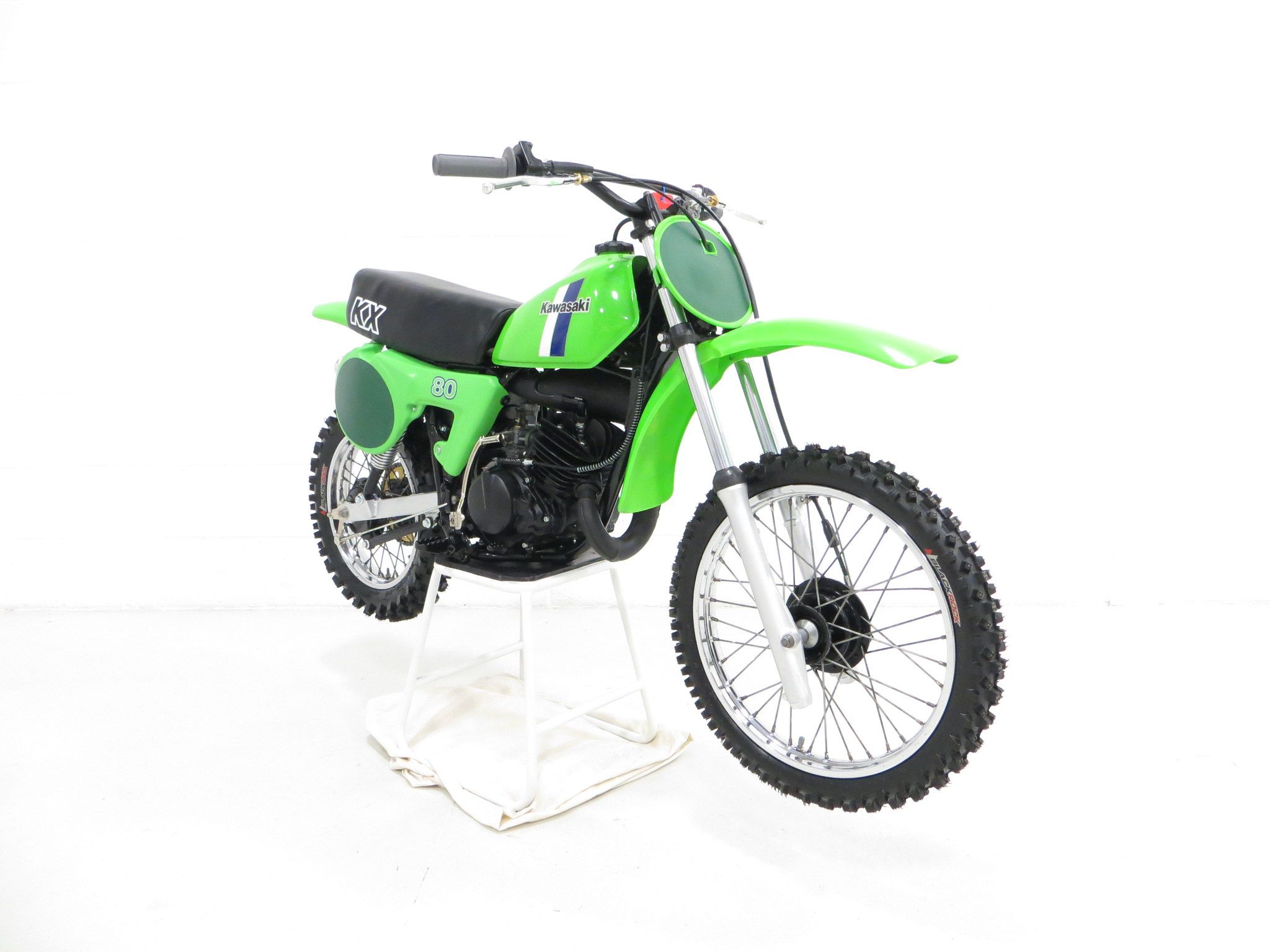 MODEL HISTORY
Bursting on the motocross scene in 1979 the KX80 was aimed as an entry level machine, slightly bigger than its competitors, it featured a torquey two stroke engine, five speed transmission and a tough motocross ready suspension.  Quick to catch on with the sports young racers, ‘Team Green’ soon started notching up wins in the BSMA’s national championships and went on to became part of Kawasaki’s most successful grass roots amateur motocross program in the sport’s history.  The KX80 was one of Kawasaki’s longest running model lines and was produced over two decades with several variants and models until it was superseded by the KX85 in 2000.

EXTERIOR
Finished in Kawasaki Lime Green, the appearance of this thoroughbred racer is superb.  This KX80-B2, built to win, had many improvements over its predecessor with an extra 30mm of suspension movement, more power, new trick box section swing arm and larger FIM-compliant rear number plates.  The black full cradle frame with the almost unbreakable plastic mudguards are in very good condition along with the correct Kawasaki decaIs on the fuel tank and side covers.  The rear mudguard has a few faint markings and the front item has two very light crease marks to the flexible plastic.  The KX marked seat and unworn grips are in remarkable condition and finishes off what is just an excellent bike. A trip down memory lane is guaranteed!

ENGINE & TRANSMISSION
The robust air-cooled 2-stroke engine has an 82cc displacement along with its proven reed-valve induction and electronic CD Ignition (CDI) to ensure maximum reliability and power.  The exclusive Kawasaki Electrofusion coating process to the lightweight cylinder head allows the dissipation of heat whilst retaining lubrication coupled with big oval-venturi Mikuni carburettor makes this 16hp @11500 rpm machine perform to its best.  It has a 5-speed gearbox with wet plate clutch and this bike starts and runs but has been on display, therefore recommissioning is recommended before use.

WHEELS, TYRES & BRAKES
The factory alloy rims incorporating the weight saving conical hubs are in great condition and are wrapped in new Black Rock 90/100-14 rear and 70/100-17 front tyres for maximum grip and dirt churning ability!  Front and rear drum brakes combine to provide confident and controlled braking for the track.

HISTORY FILE
Having earnt its long-due respect in the world of competition Motocross, the KX Series is instantly recognisable and the vibrant Lime Green bikes have become a familiar sight at the top of the Motocross charts.  This 1980 KX80-B2 example, frame number A-017000, features several revisions from the 1979 model year, all remaining standard and exactly as Kawasaki intended.  Having avoided the Junior Enduro hardship that befell many example, this bike has been preserved in amazing order and was in fact displayed in a pub games room for many years and flanked by a matching green 1979 KX80 and its big brother, an ultra-rare KX250-A4!  KGF Classic Cars are delighted to offer this machine to our ever-diverse portfolio of modern classic cars and motorcycles, ready for the next owner/collector to enjoy.  An unmissable opportunity to own a junior class championship winner.