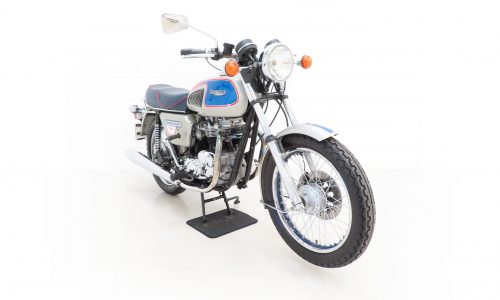 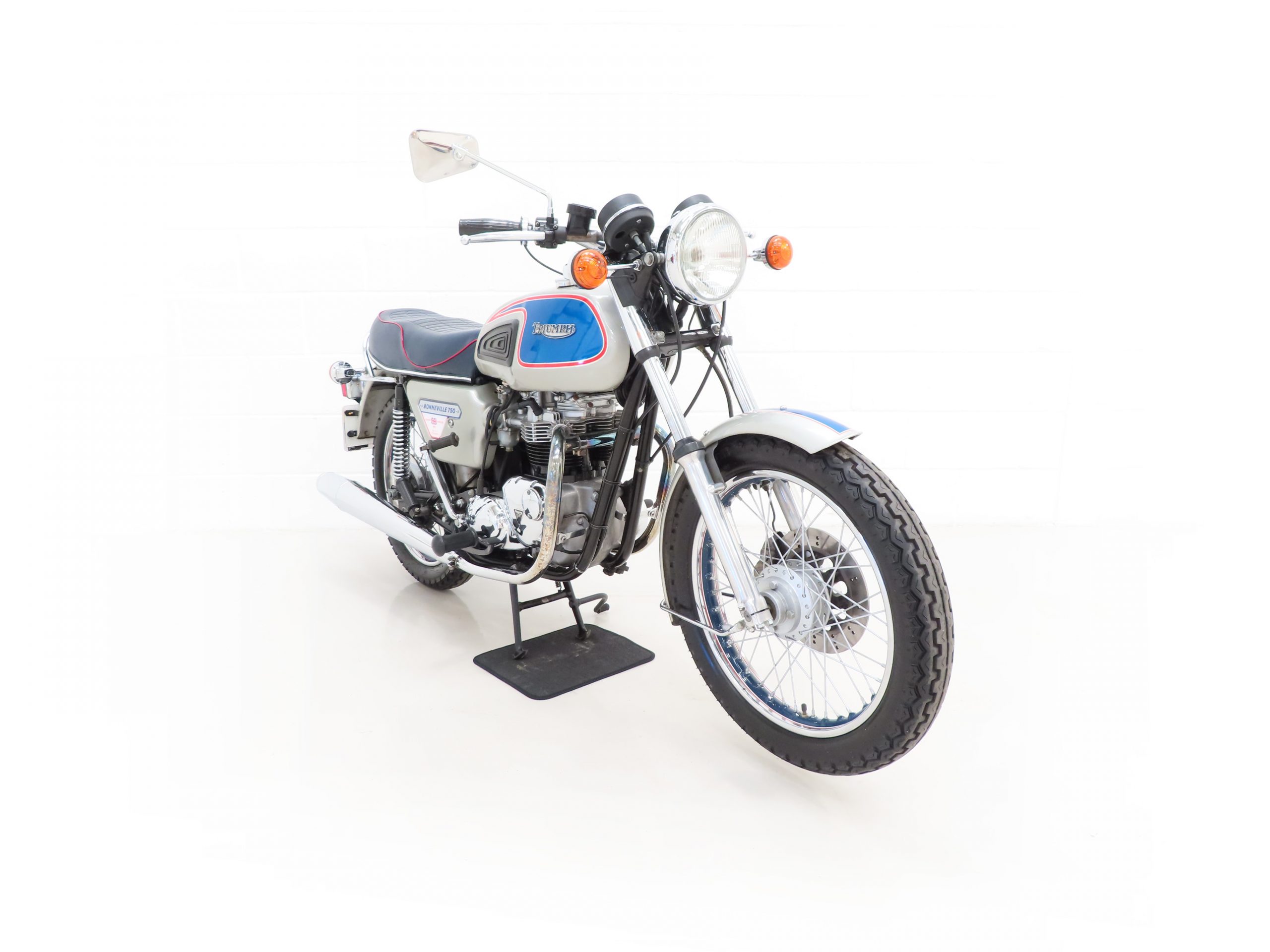 MODEL HISTORY
To mark Her Majesty The Queen Elizabeth II’s Silver Jubilee in 1977, Triumph who were otherwise known as the Meridan Motorcycle Co-operative, manufactured a special Silver Jubilee Edition of the Bonneville, technically the T140J, the J suffix denoting Jubilee. Only 1,000 units were produced for the UK, with a further 1,000 for the USA market following huge demand from the Americans. Demand still had not dwindled after 2,000 bikes had been produced and 400 more were made for international markets. All featured a colour scheme of metallic silver of course to correlate with the Jubilee with hand finished red, white and blue detailing to celebrate the Union Jack Flag. External engine covers were also chromed. An obvious difference between the US and home market machines were the fuel tanks whereby a slim teardrop tank was fitted to the US bikes while UK bikes had a 4.5 gallon ‘square tank’ with rubber knee pads. Each bike was issued with a Certificate Of Ownership and such was the success of the Silver Jubilee Edition that further special editions were produced including even the 1981 T140LE Royal Wedding Edition.

EXTERIOR
One of only 1,000 UK bikes, this incredible example is preserved in factory original condition and has covered just 3,592 miles from new. The unrestored paintwork looks fantastic with only light natural aging commensurate with a low mileage and cosseted example. All hand applied red, blue and white detailing and pin-striping remains as per factory application and looks superb. The frame is in fine order with no visual evidence of repair work and the original stock frame number stamping is clearly legible which in turn correlates with the engine number of this matching numbers machine. Original pedal rubbers and grips have been retained after accurate replacements were sourced by the previous owner and absolutely all light fittings are original Lucas items. The unrestored chrome is very bright and in superb order aside from some very faint tarnishing to the rear grab handle and the light shroud stickers have faded. The side panel plaques proudly display the Silver Jubilee one of a thousand writing correct for an earlier build bike and the special ‘King and Queen’ dark blue vinyl seat with red piping is preserved factory fitment. A wonderful celebration of the Queens 25 years on the throne.

ENGINE & TRANSMISSION
The beating heart of this formidable machine is the air-cooled 744cc OHV vertical twin with twin 30mm Amal carburettors and Lucas ignition developing 54hp at 5000rpm. Matching number credentials are verified with the engine number stamping clear. Correct for an earlier build example is the J (for Jubilee), stamped aside from the raised VIN block where the main number was sited as initially engines only stamped with the ‘J’ when fitted into a Jubilee frame whereas later Jubilee destined engine were stamped with the ‘J’ within the raised VIN block at the time of manufacture. Both twin exhausts are factory fitment with part number and Meridan Motorcycle Co-operative stamped into the attachment plate. The engine and transmission are totally standard and the five-speed gearbox operates well.

HISTORY FILE
Factory build records confirm that this UK example was made in March 1977 as denoted by the ‘CP’ prefix to both the frame and engine numbers, which in turn correlates with the bikes early build features. First registration was on the 11th November 1977 to Mr Talbot as confirmed by the original V5 registration document as well as the Certificate of Ownership naming Mr Talbot which importantly remains in the history file. The certificate was signed by the then Chairman of Meridan Motorcycles Limited, the much respected and now late Mr Denis Crowder Johnson, who joined Triumph Motorcycles as a 16-year-old in 1959.

The history file contains the original handbooks and a folder of invoices, MOT certificates and spare keys. The previous owner enjoys a collection of bikes including a Yamaha RD400 and modern Norton and after a long search for an original and unspoilt Bonneville Silver Jubilee Edition found this example. With the 2022 celebration of our Queens Platinum Jubilee, why not mark the occasion with this stunning 45-year-old celebration to mark her Silver Jubilee?!