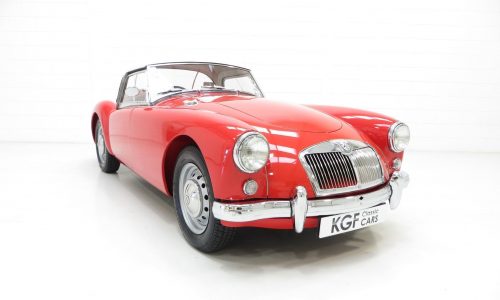 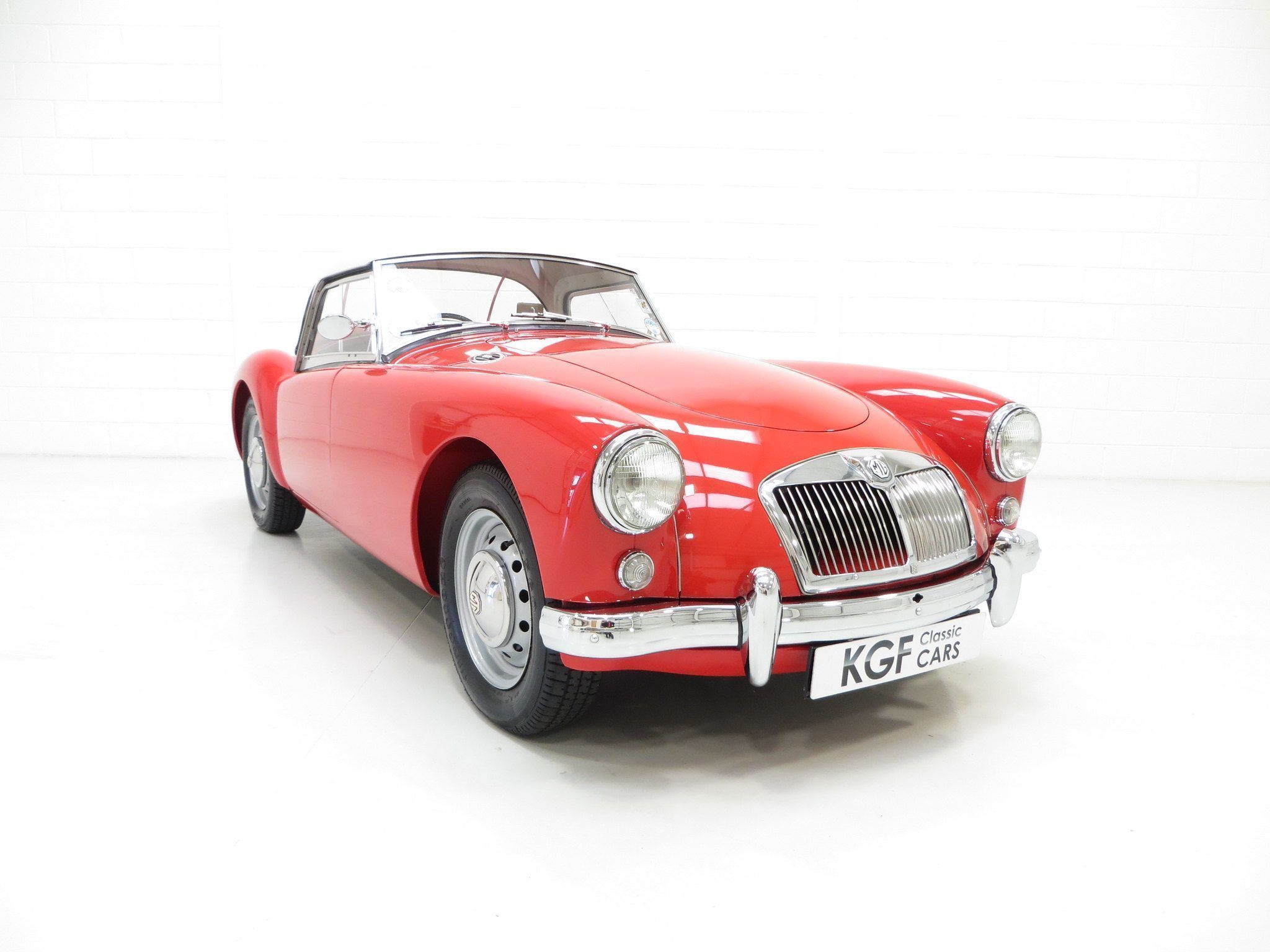 EXTERIOR
Very rarely is such a genuine home market MGA offered for sale and this Orient Red stunning car is exceptional in both condition and historical provenance. The deep gloss shine reveals the pampered existence with Concours D’Elegance awards noted from as early as 1959! Scrutineers will marvel at the wheel arches in body colour, original number plates and the black folding waterproof hood still with factory side screens adopting the signalling flap along the lower edge. The chrome radiator grille with vertical slats unique to the 1500 model and bumpers have a mirror finish thanks to be rechromed by Derby plating. The flowing aerodynamic lines are absolutely gorgeous and a genuine Vanden Plas aluminium hardtop, of which only 1450 units were made by the BMC subsidiary with the correct aluminium sidescreens, is available by separate negotiation.

INTERIOR
A beautifully appointed interior has all the qualities of a traditional sports tourer with bucket seats still finished in the factory real Red leather. The previous owner being immensely fastidious would carry premium leather feed in the car at all times to retain the natural look missing in off-the-shelf new items. Karvel carpets with correct binding and oddities like the central dashboard-mounted horn button will please purists but for convenience a hidden 12v power outlet has been fitted, a battery isolator and an auxiliary fusebox to protect unfused circuits. All Jaeger gauges, switches and warning lamps function and this example feels factory correct in every respect.

ENGINE & TRANSMISSION
Lifting the bonnet will reveal a spotless engine bay and a level of detail unrivalled by most. The original 1500 British Motor Corporation B series Engine has been rebuilt by Bob West and the unleaded cylinder head by Peter Burgess so performs faultlessly. A documented and meticulous periodic servicing regime will assure perfection seeking buyers. A maximum speed of 95mph is quoted by the 68bhp power unit. A recognised 5-speed conversion has been carried out by Hi-Gear Engineering to allow comfortable cruising.

HISTORY FILE
Truly phenomenal and second to none. One of only 1,859 Home Market UK 1500 Roadsters produced this example has had a total of just five owners in 59 years and covered 77,229 miles. First registered on the 23rd April 1957 to Mr Francis Ware who sold the vehicle after one year to Kenneth George Roe, custodian for the next 23 years. As a well know figure in MG circles and having previously owned a TA and a TF he just had to have the new aerodynamic MGA and competed in various sprints and hill climbs. Although it was not primarily used as a concours car Mr Roe entered it various events all documented in the history file and noteworthy mentions are a second in class in the BARC Eastbourne Motor Rally Concours in 1959, ’Best Modern MG’ awards at the Brenwood Concours in the 1960’s and a pile of ‘First in Class’ awards at M.G.C.C Silverstone in the late 1960’s. There are a number of photos of the car in the late 50’s and early 60’s, one with the last ever Twin-Cam built and owned by Mike Ellman-Brown, a good friend of Mr Roe at the time. Letters between owners make fascinating reading and the current custodian of 18 years, Mr Parmenter, has chronically and fastidiously noted all works carried out in recognition of the unique provenance this vehicle processes and written helpful notes for the new owner. Also featured in the book by F.Wilson McComb in the History of the MG and Malcolm Green, the well-known MG historian and motoring journalist wrote an article about the car in the December 1999 MG Enthusiast magazine, all included. The car comes with a full set of manuals including the first edition operation manual and original hardback workshop manual in perfect condition. A very rare opportunity and special car.