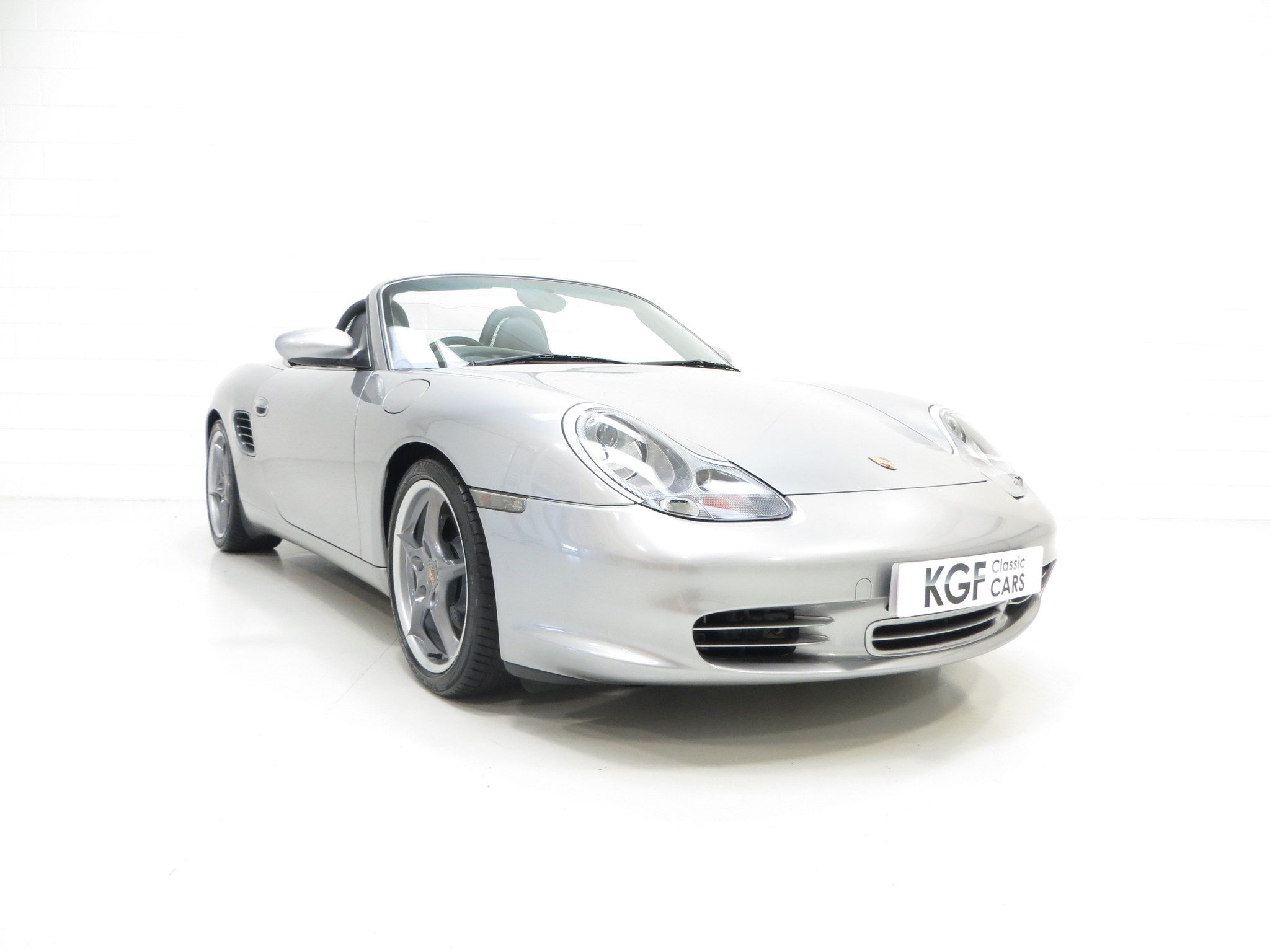 A legendary Porsche Boxster S 550 Anniversary Edition with only 20,489 miles.

EXTERIOR
This exceptional example is finished in the only available colour, GT Silver Metallic paintwork (code LM7Z). It harks back to the original ancestral lines of the curvaceous 550 Spyder with the styling cues and the unmistakable Porsche bloodlines clear to see. A virtually flawless factory finish is guaranteed to marvel even the most demanding scrutineer and the car is totally standard without exception, including the special Anniversary Edition styling attributes. The UV-resistant hood in Black (an option from the standard Cocoa Brown) is perfect in both operation and condition and the original supplying dealer number plates remain fitted. A very special example of the car built to celebrate a Porsche Icon.

INTERIOR
Exemplary craftsmanship and race inspired hallmarks in the form of the sculptured sports seats shrouded in Dark Grey rich natural leather (code U2), the upholstery is exceptional as to be expected from such minimal usage. This well-appointed cabin space was specified with every conceivable factory option with the exclusion only of the Tiptronic transmission, the original owner preferring to opt for the manual set up. The original carpeting has been perfectly protected by dealer fitted over mats from new. The leather surface dashboard and incorporated switchgear are in flawless condition, with all functions operating as intended. The supplying dealer tax disc holder remains affixed to the front screen. Exceptionally good in every respect.

ENGINE & TRANSMISSION
Fitted with the robust flat six Porsche Boxer Engine, namesake to the Boxster, this powerplant requires little introduction. Porsche Engineers developed an uprated 264hp from the 3,179cc unit to allow 0-62mph in just 5.7 seconds with a top speed of 165mph! The punchy sound delivered from the sonically tuned and exclusive to the Anniversary Edition exhaust system is guaranteed to set the pulse racing. The re-engineered 6-speed manual transmission is short, sporty and incredibly direct having a 15% shorter throw compared to the Boxster S.

WHEELS, TYRES & BRAKES
The 7.5 J x 18 and 9 J x 18 light alloy wheels fitted front and rear respectively are finished in Seal Grey with coloured Porsche Crests. All four rims are in flawless condition and the ultra low profile tyres are the highest quality Michelin Pilot sport with masses of tread remaining. The ABS assisted braking system incorporates 4-Wheel ventilated and cross-drilled discs with 4-piston fixed monobloc callipers. Both ornate discs and cool aluminium painted callipers unique to this model are clearly visible through the spokes and hint towards the racing pedigree infused within the cars genes.

HISTORY FILE
Registered new on 7th March 2004 by Main Dealers The Porsche Centre Nottingham, the first registered keeper Mr Peter Smith owned the car until July 2007 whereby it returned to them to be sold as an Approved Used Porsche. The second and only other keeper, Mr Anthony Wilkinson, purchased the car for £29,995 as revealed by the Used Vehicle Invoice. Amazingly, this limited number Anniversary Edition has returned only to the supplying dealer for servicing. The latest visit being in January 2016 for a major service plus the massively expensive spark plug change.
Absolutely every MOT from new and all handbooks housed in the black A5 Porsche wallet. Acknowledged as a true collector’s item with only 150 RHD examples being made, (Source: Porsche World Magazine), a similar low mileage, low owner car was sold at Silverstone Auction in October 2015 for £23,850. Click here to view the auction listing. One for the marque enthusiast without question.