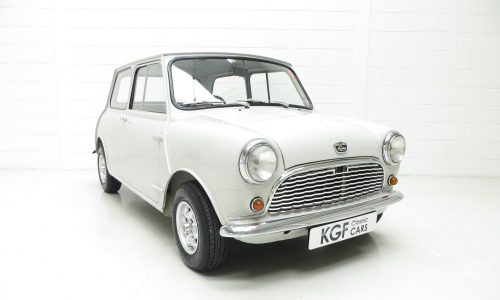 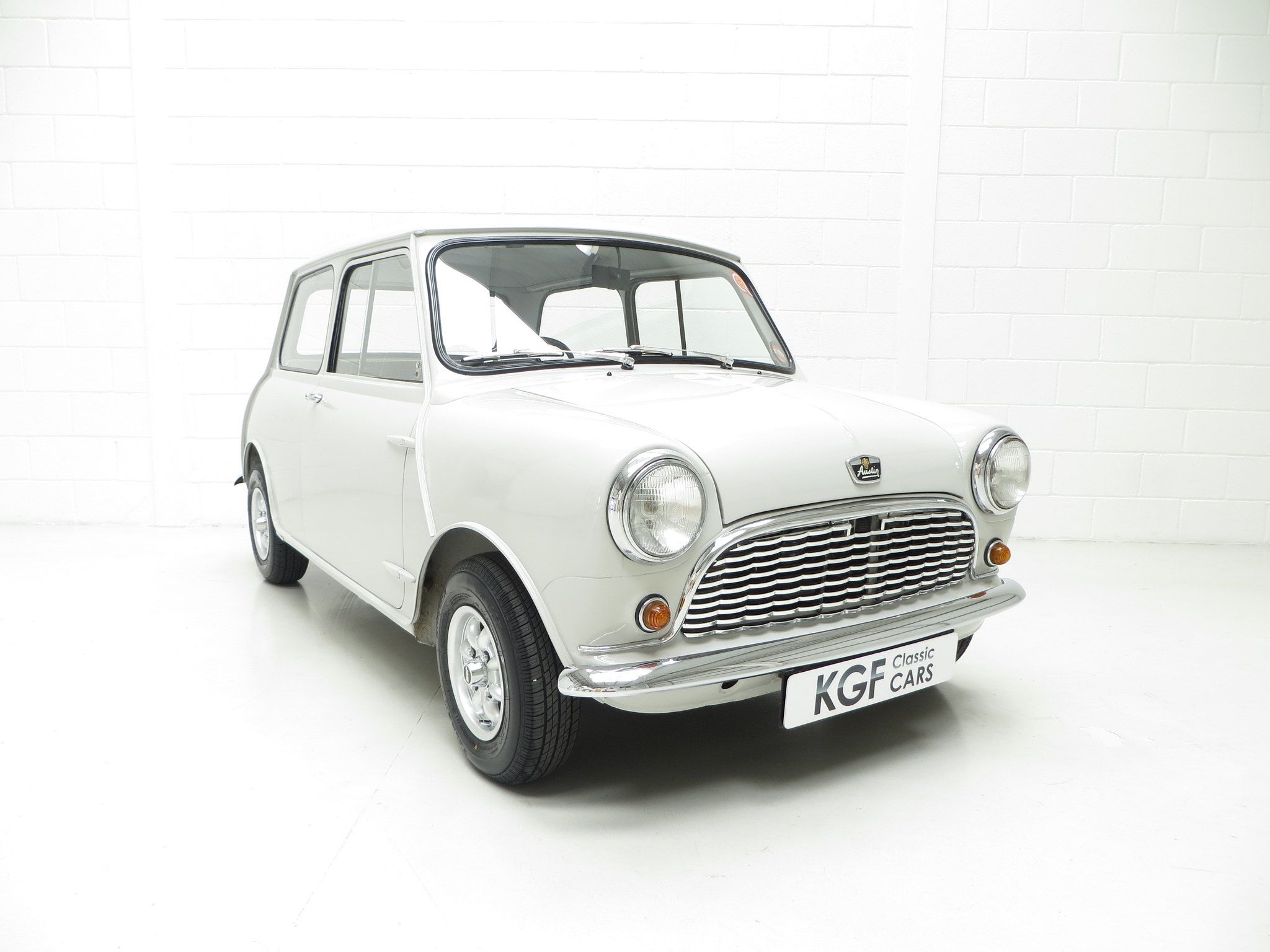 EXTERIOR
This stunning very early Austin Mini is finished in hard wearing Farina Grey, (Code GR11), and is virtually flawless with an impressive glossy shine.  Being the Basic model no bright inserts are found in the window rubbers and correct features such as the body colour petrol filler cap and rear number plate lamp in black remain fitted.  Considered by some as running prototypes the early production models had distinguishing features such as the non-recessed glass apertures and flat sills.  These cars were 50kg lighter than the standard production car.  The wavy chrome grill and correct boot script are in excellent order.  Wheel arch apertures are incredibly clean and the underside is body coloured.  Cuteness in abundance!

INTERIOR
Being the Basic model the seats are finished hard wearing Grey Woven Cloth that have been meticulously recreated by Hunters of Brora Ltd and look absolutely fabulous.  The cream Austin speedo is beautifully preserved and sits fully functional on the painted board dash lining.  Unique features are still fitted such as the flat switch panel, centre hinged sun visor and the rear view mirror with a long slender stem and pinch bracket to hold the glass finished in crackle black.  Thick pile grey carpeting and matching woven cloth door cards have been professionally tailored and replace the rubber mats..  The floor mounted starter button remains in situ.  Simply divine.

ENGINE & TRANSMISSION
A water cooled, overhead-valve four-cylinder engine mounted transversely has a cubic capacity of 848cc and produces 34bhp.  The engine is whisper quiet and is still the factory supplied unit with matching numbers.  Early production car features such as the metal oil filler cap and metal filler caps for the master cylinders are still fitted.  The correct DR2 wiper motor and heater take off tap accessed from the engine bay on top of the head is fitted. The cylinder head has been converted to run on unleaded.  The engine bay has been detailed for bonnet-up showing and creating a ‘wow’ factor  The original 4-speed gearbox works well and is operated via the correct straight gear stick as fitted only to early cars.

WHEELS, TYRES & BRAKES
Pristine JBW Minilight alloy wheels with new Falken 145/80 R10 tyres have been fitted. Braking to all four wheels is hydraulically operated by a pendant pedal with two leading shoes at the front.  The handbrake lever is the correct type with the chrome button.

HISTORY FILE
Built on the 18th November 1959 this example is one of the most iconic of all the Minis as it was built within the first three months of the public launch date of the 26th August 1959 as confirmed by the Heritage Motor Centre.  These early built cars possess a uniqueness with individual build differences before full scale production, standardisation and the ‘facelift’ in October 1960.  With only three owners from new this example has a fascinating history all catalogued in the history file.  The first owner enjoyed the car for six years before a Mr Mucklejohn purchased the car for his son, Ian, in 1965.  Only used by Ian for two years before being hit head-on by a Ford Cortina.  Fortunately Ian suffered only minor injuries and even kept the newspaper extract dated the 10th February 1967 where the Cortina driver was fined £10 with a licence endorsement!  A Front End number of FE68802 confirms dating of August 1960 to the body after the repairs.  While the vehicle was being repaired Ian purchased a Hillman Imp which he preferred to drive so once the Mini was returned it lay idle and unused.  In 1999 after 32 years of being off the road Ian decided to have the vehicle restored to ‘as new’ condition with an invoice presented for the privilege of £14,726.90.  After 50 years of ownership KGF Classic Cars were delighted to sell the car to the third keeper, Mr Robin Guest who has now decided to sell in order to concentrate on his primary passion, motorcycles.

A history file comprising of wonderful period artefacts including letters, photos and period literature are included along with a certificate from the 1959 Mini Register & Mini Magazine identifying this example as a surviving 1959 Mini and thus formed part of the Mini 50th anniversary celebrations.