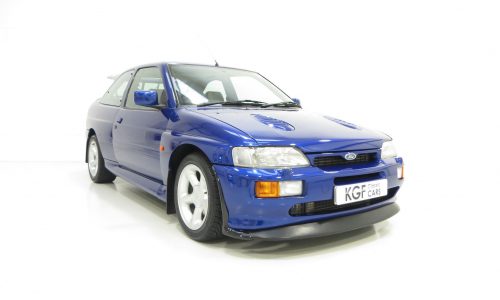 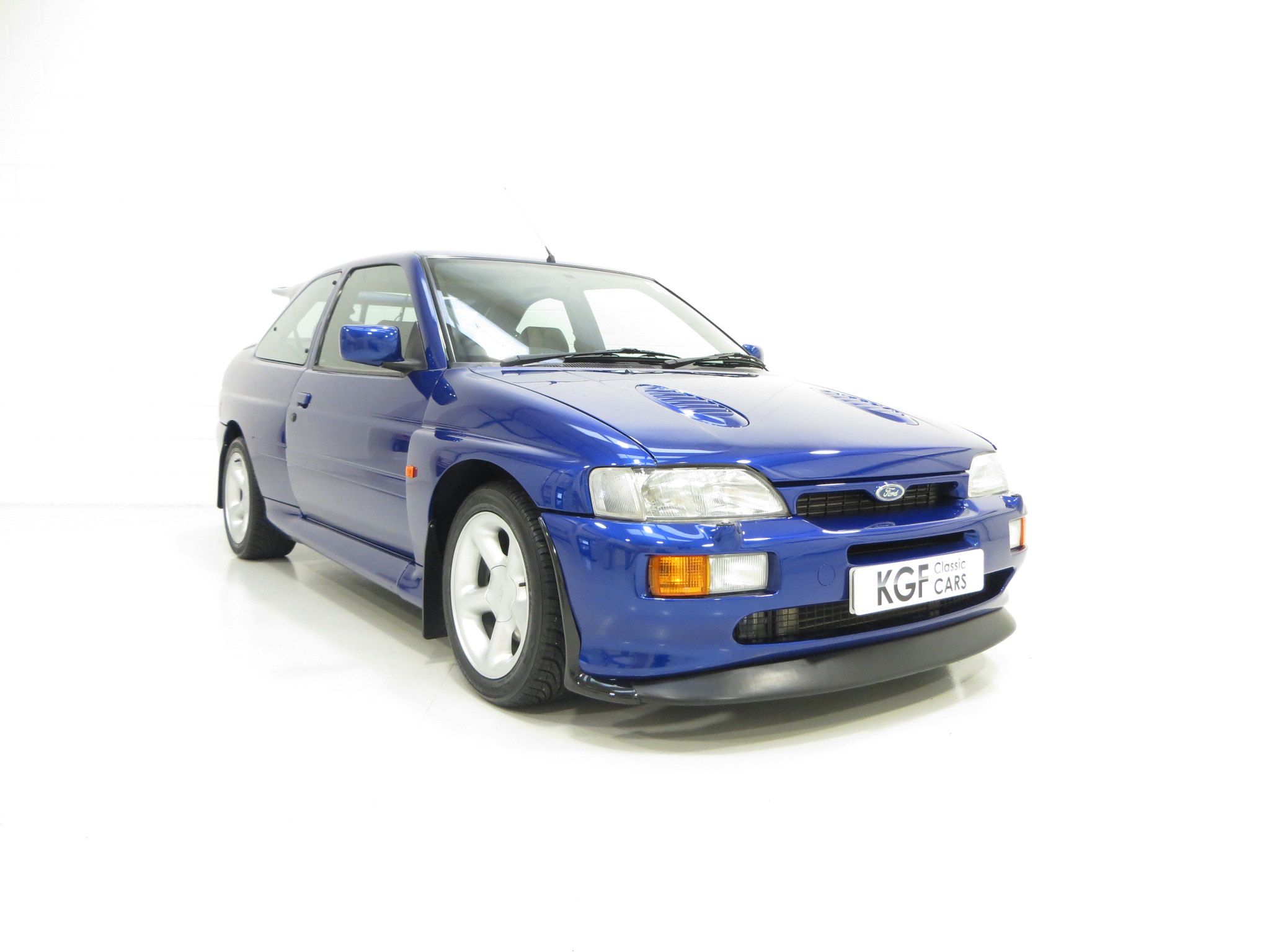 MODEL HISTORY
The Ford Escort RS Cosworth was a sports derivative and rally homologation special of the fifth generation Ford Escort. It was designed to qualify as a Group A car for the World Rally Championship.  It was available as a road car from 1992-96 in limited numbers from Ford’s Specialist Vehicle Engineering, (SVE), team.  It combines the hand-assembled engine expertise of Cosworth and the coach-building crafts of Karmann.  In order to accommodate the larger Cosworth engine and transmission Ford developed the car around the chassis and mechanicals of its predecessor, the Sierra Cosworth.  A very rare car with only 7,145 examples being produced and this one of the early 2500 built for homologation.  (Source Wikipedia, 1995 Edition One RS Brochure and the RS Owners Club).

EXTERIOR
The striking exterior of this Escort RS Cosworth is nothing short of brilliant.  Finished in desirable Ford Imperial Blue, (code H3), the paintwork boasts a deep striking shine from the smooth polished exterior.   A uniform finish is assured with no dings and only a few tiny markings stop this from being a perfect refreshed example.  Early homologation clues such as the exposed petrol cap remain.  All exterior trim is in excellent order including the lights, badges and rubbers.  One for the true petrol head!

INTERIOR
The interior of this Escort Cosworth is a very special place to be.  The Recaro seats are finished in optional Raven Leather (code LW) showing slight wear to the drivers bolster.  The cut-pile carpets are perfect along with all the other interior trim items.  The comprehensive and sophisticated instrumentation has beautiful dials with black detail on a white background.  The vehicle is fitted with the optional and very rare air conditioning and Ford 2040 CD player so with the Luxury package,  represents full specification.  An additional boost gauge is fitted along with a Clifford alarm.  The boot area is pristine and houses the factory fitted space-saver spare wheel and correct jack.

ENGINE & TRANSMISSION
The Cosworth YBT engine warrants little introduction.  Fitted with the Garrett AiResarch T3 turbo charger the motorsport pedigree of this car is unmistakable.  Worked on by the likes of Graham Goode Racing with invoices totalling thousands to prove the standard output of 227HP is surpassed allowing the car accelerate rapidly through 0-60 in 5.7 seconds and reach a top speed of 140mph.  Modifications include a RS500 inlet manifold, Radtec alloy large core intercooler and the eight hose finisher kit.  A turbo waste gate actuator has also been installed.  The permanent Ferguson four wheel drive system with 34/66% front/rear power split mated to a MT 75 5-speed gearbox is a delight.

HISTORY FILE
Very comprehensive.  Built at the Rheine Assembly Plant in Germany and registered new on the 10th March 1994 making this model one of the highly sought after 2500 large turbo homologation specials.  A history file revels the vehicle was originally supplied to a Mr Gary Rhodes for the sum of £26,605.  Invoices, MOT certificates and various correspondence verify the low miles of 53,533 and care lavished on this example.  Recent expenditure in September 2015 by RallyTec amounts to £3010.98 and a further £2,855.20 in July 2014 was spent at the Chelmsford Carriage Company which included the essential timing belt and tensioner at 52,647 miles.  An independent report commissioned by the previous owner by renowned valuation experts Julian Shoolheifer Limited was carried out on 28th October 2014 and a valuation of £20,000 was given.
All handbooks, owners supplements and stamped service book is present.