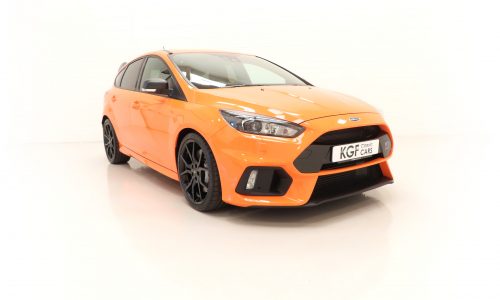 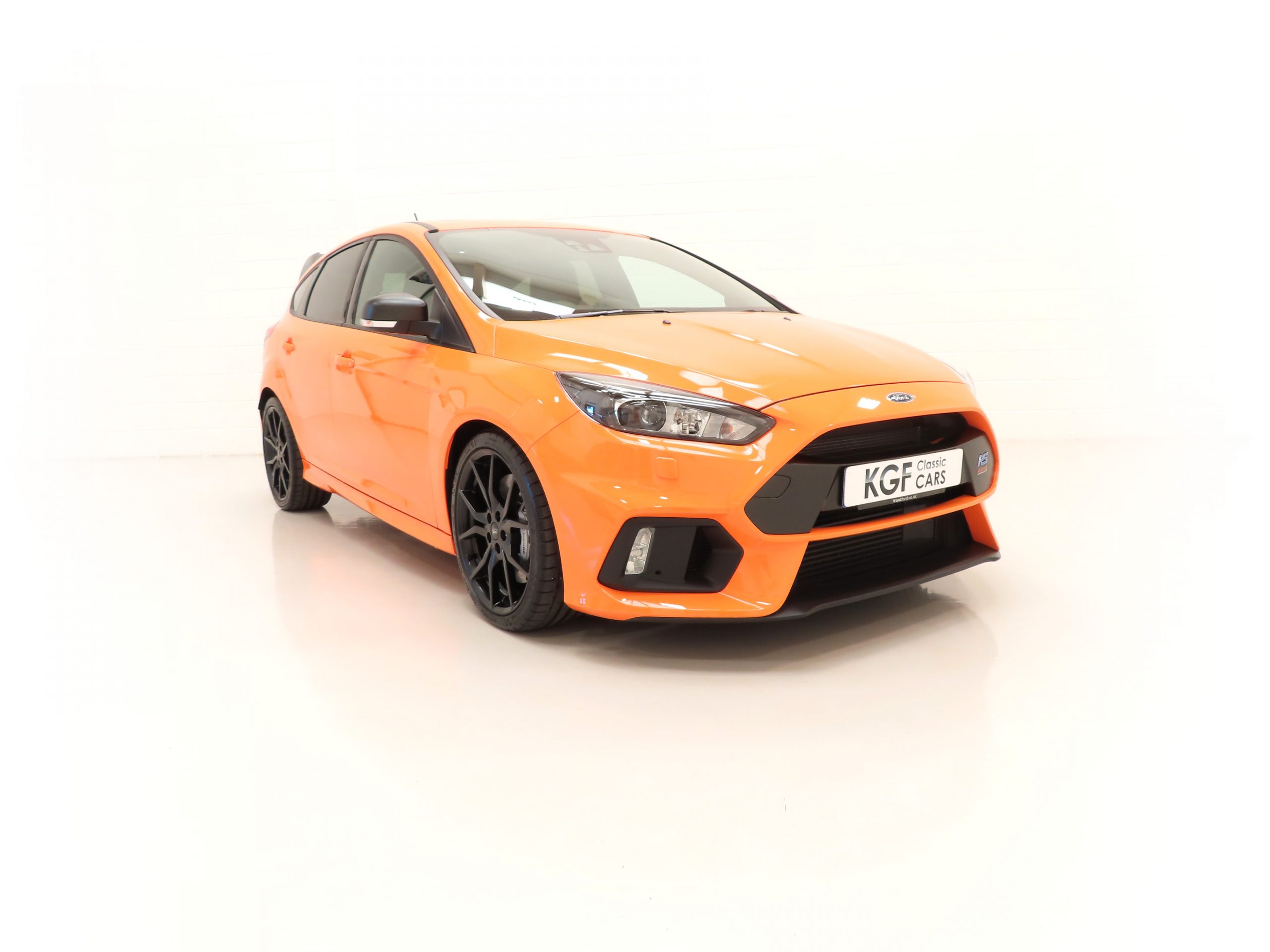 MODEL HISTORY
Warley at Brentwood in Essex, the then home of The Ford Motor Company UK, announced on the 14th February 2018 a limited run of 50 Heritage Edition Focus RS models built to celebrate 50 years since the launch of the Ford Escort and to pay homage to the introduction of the RS brand to the UK. The final 50 right-hand-drive Focus RS units from the Saarlouis Plant in Germany were to be Heritage Editions and priced at £39,895 with anticipated huge demand. The 50 cars were finished only in “Tief Orange” (Deep Orange) with other unique styling features and performance accoutrements to make it, at 370bhp, the fastest Focus RS variant ever. It was announced by Ford UK boss, Andy Barratt, that all 50 cars were sold within 30 minutes of launch thanks to the frenzy created from a single Facebook post!

EXTERIOR
If being one of only 50 Heritage Edition Focus RS models was not special enough, this example was purchased new by the famous racing driver and television presenter, most notably of Top Gear and Fifth Gear, Vicki Butler-Henderson who owned the car until August 2019. Finished in the only colour available Tief Orange, (Deep Orange – Code SJF), the car presents exactly as you would expect from a low 2,618 miles. The paintwork and contrasting Heritage styling pieces on this iconic RS product look absolutely sensational and nothing other than one touched in stone chip to the bonnet is worthy of mention. A virtually invisible translucent frontal pre-cut 3M wrap has been applied to protect from damage and UV rays. The underside is preserved in line with the super-low mileage and dry stored credentials and the car is entirely factory original including the supplying Ford Dealer number plates. A perfect example with amazing provenance.

INTERIOR
Upon opening the door of this volcanic Focus, you are instantly greeted with extrovert styling including the naked seat frame emblazoned with Recaro lettering, bright blue contrast stitching throughout and brushed aluminium tread plates with RS logo. Climb into the phenomenal Recaro Race moulded seats with huge bolsters and harness holes and you are instantly aware this is a cockpit like no ordinary Focus! The partial leather/Alcantara seat upholstery, (Code AR), is in perfect condition as is the rest of the trim and soft-touch material in a car that has covered just 2,618 miles. The carpets are as new having being protected by three sets of carpet mats and further preservation measures include the tailored RS dashboard protector. All functions, gauges and controls are as new and fully functional including the SYNC3 8” touchscreen DAB audio nav system.

ENGINE & TRANSMISSION
Specially designed for high performance, Ford’s 2.3 litre Ecoboost engine in the heritage Edition gained the dealer fitted FPM375 Mountune upgrade which increased overboost power from 350bhp to 370bhp and torque from 470Nm to 510Nm over the standard RS, good for a 0-62mph in just 4.7 seconds and a 165mph top speed! In addition to this, the Heritage was fitted with a mechanical Quiafe limited-slip front differential to limit torque delivered a wheel that has reduced traction and redistribute torque to the wheel with more traction in order to counteract the stability and acceleration detriments of a wheelspin. The engine bay is as new and just as it left the dealership with huge Ford Performance badge, Deep Orange Mountune hoses and RS air box casing as well as all stickers, labels and PDI markings present. With the Quiafe ATB fitted to the front axle of the all-wheel-drive system and 6-speed manual gearbox, this sure-footed RS is a formidable performance machine.

HISTORY FILE
This outstanding Ford Focus RS Heritage Edition was registered new on the 28th April 2018 by Trust Ford of Epsom to first owner, Vicki Butler-Henderson, the famous racing driver and television presenter, most notably of Top Gear and Fifth Gear. Each RS Heritage Edition was presented to the first owner with the Mountune Performance Parts box containing original components removed by the dealer after the FPM375 upgrade kit was fitted. The box is present with this car with the name ‘Butler’ written on it by the dealership and a small set of badges issued by the RS Owners Club records this car as number 41/50. The vehicle presentation pack incudes the Ford performance document wallet containing all handbooks including both the Focus RS Owner’s Manual Supplement and the additional orange Mountune Owner’s supplement, issued uniquely with RS Heritage Editions. The vehicle has full Ford service history and is booked in for its next service on the 4th October 2021 at Ford Main Dealer, TC Harrison in Peterborough. The car has both original remote keys and there is also a press release document with photographs. Vicki Butler-Henderson owned the car until August 2019 at which point the second and only other keeper purchased the vehicle from a specialist and a cost of £57,495. One of the most coveted of all RS cars and surely the jewel in even the best RS collections.