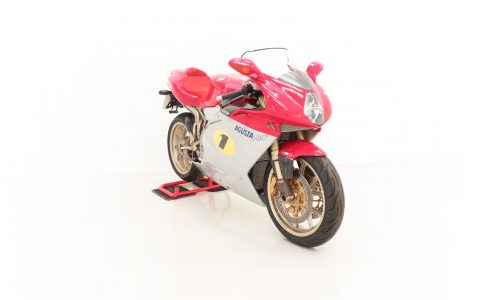 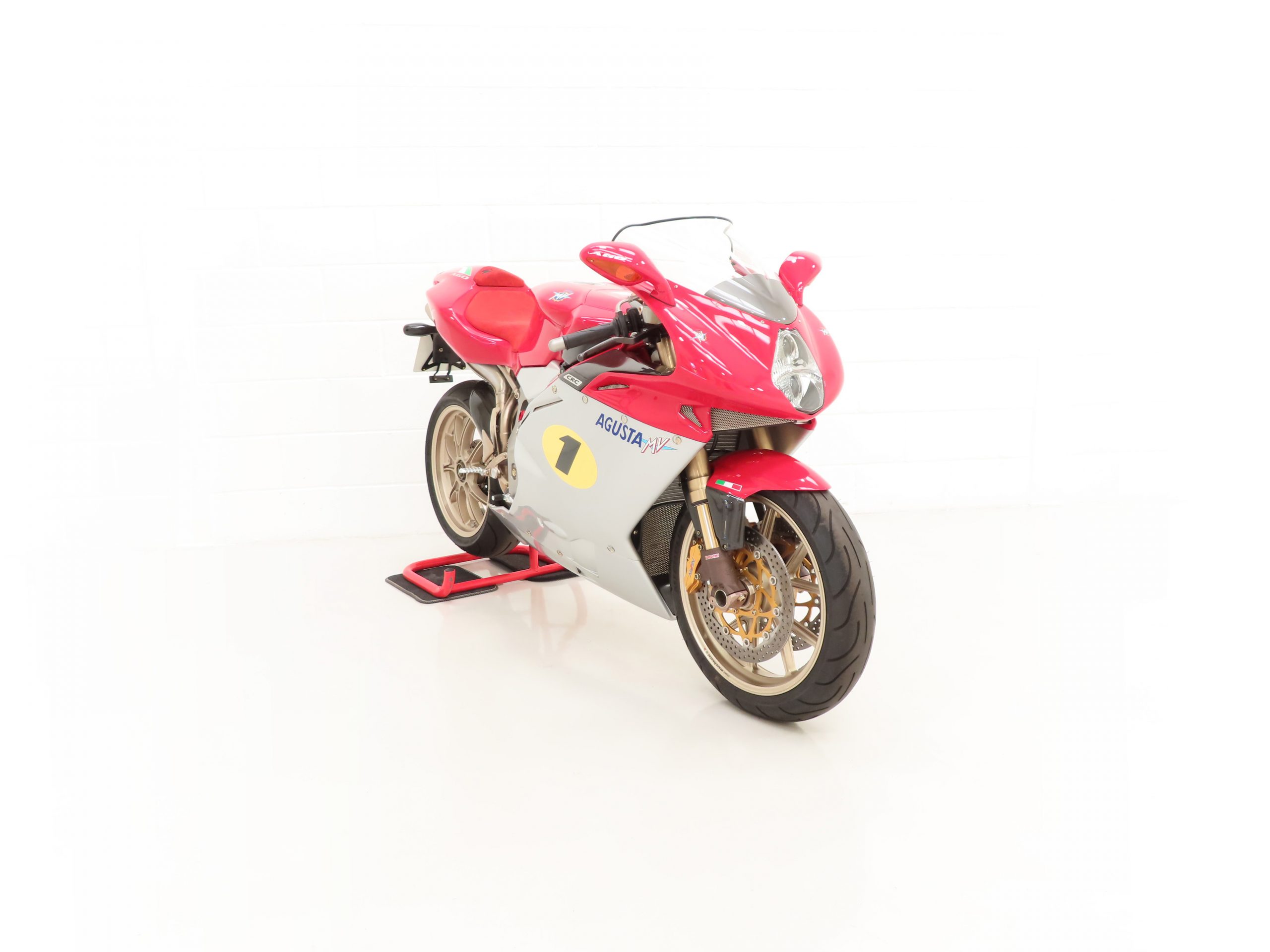 MODEL HISTORY
The MV Agusta FA is a Series of sports bikes produced from 1999 to 2018 and was the motorcycle that launched the resurrection of the brand in 1998. The F4 1000 AGO was a tribute to multi-time world champion Grand Prix motorcycle road racer Giacomo Agostini ‘Ago’ who was often regarded as ‘perhaps the best Grand Prix rider of all time’. Ago achieved most of his Championship successes on an MV which included 122 Grand Prix wins and 15 World Championship titles. Production of the F4 1000 Ago was limited to 300 bikes which were all finished in classic MV Agusta red and silver with special graphics prominently displaying the number “1” in a yellow oval in reference to MV Agusta’s racing heritage and rider Agostini. The seat was finished in red Alcantara, with an F4 logo embroidered on it. The instruments had white faces with markings, and the rev-counter featured Agostini’s signature. A Certificate of Autenticita signed by Giacomo Agostini and corresponding 18 carat gold numbered handlebar plate was individually assigned to each bike.

EXTERIOR
‘The legend becomes bike’ was the marketing slogan for the MV Agusta FA 1000 AGO referring its tribute to world champion Grand Prix racer Giacomo ‘Ago’ Agostini. A limited production of just 300 bikes makes the AGO exceptionally rare and this example, number 056/300, has covered just 164 miles from new! With little more than delivery mileage, the bike is as close to factory perfection as you are likely to see with absolutely no imperfections visible. A collector seeking untouched excellence will delight at every gleaming component, decal and beautifully machined alloy element and all factory labels and identification markers are fully intact and correct. The bright red Alcantara seat is pristine with none of the common bobbling found even on machines covering little more than 1,000 miles. All controls and displays function and even hidden crevices are clean, proving the pampered existence this sports bike icon has led.

ENGINE & TRANSMISSION
Powered by a liquid cooled inline-four 998cc 16 valve engine with Weber Marelli 1,6 M ignition system and multipoint electronic injection, power output is quoted at 166hp at 11750rpm and 109Nm of torque at 10,200rpm with a claimed top speed of 184.3mph! Weighing just 190kg, blistering response and performance across the rev range is assured and the factory four-branch titanium exhaust sounds awesome. The race-inspired cassette-type six-speed gearbox utilises every ounce of power and operates perfectly.

WHEELS, TYRES & BRAKES
Stunning original Marchesini designed wheels in forged in aluminium alloy are in outstanding condition and shod in the factory fitted Michelin Pilot tyres date stamped 2004, a must for this bike’s prestigious collector credentials. Nissin 6 pot front and 4 pot rear callipers and front discs with gold flange are beautifully machined and perform and present as you would expect from a machine that has covered just 164 miles.

HISTORY FILE
Each Certificate of Autenticita was individually signed by Giacomo Agostini and the framed document present in the history file confirms this example as number 056/300. The supplying dealer, Three Cross Motorcycles in Dorset, registered the bike new on the 16th July 2004 and their original branded number plate remains fitted to the bike. Just two collector owners from new have both recognised the huge importance of the model and resisted the urge to ride the bike in order to preserve the ultra-low 164 miles. The history file consists of the Use and Maintenance Manual as well as the original Service and Warranty Booklet evidencing the PDI and five services, the most recent by specialist firm BSD Performance in Cambridgeshire. All supporting service invoices have been kept as have the previous MOT certificates and there are two sets of keys with code tags, fobs and original sheath to the spare blade. The sought-after dealership accessories remain with the bike as does the engine management chip and titanium exhaust system still in the original box. KGF Classic Cars are honoured to be able to work with such a sports bike icon built in homage to a world champion Grand Prix motorcycle road racing legend, Mr Giacomo ‘Ago’ Agostini. Bike number 056/300 is surely the jewel in the best of collections.