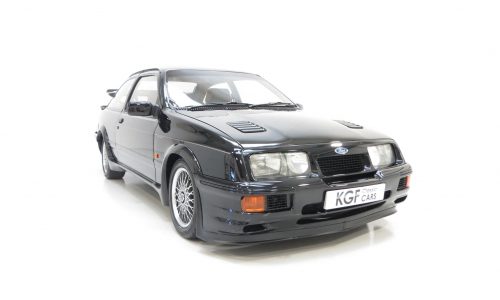 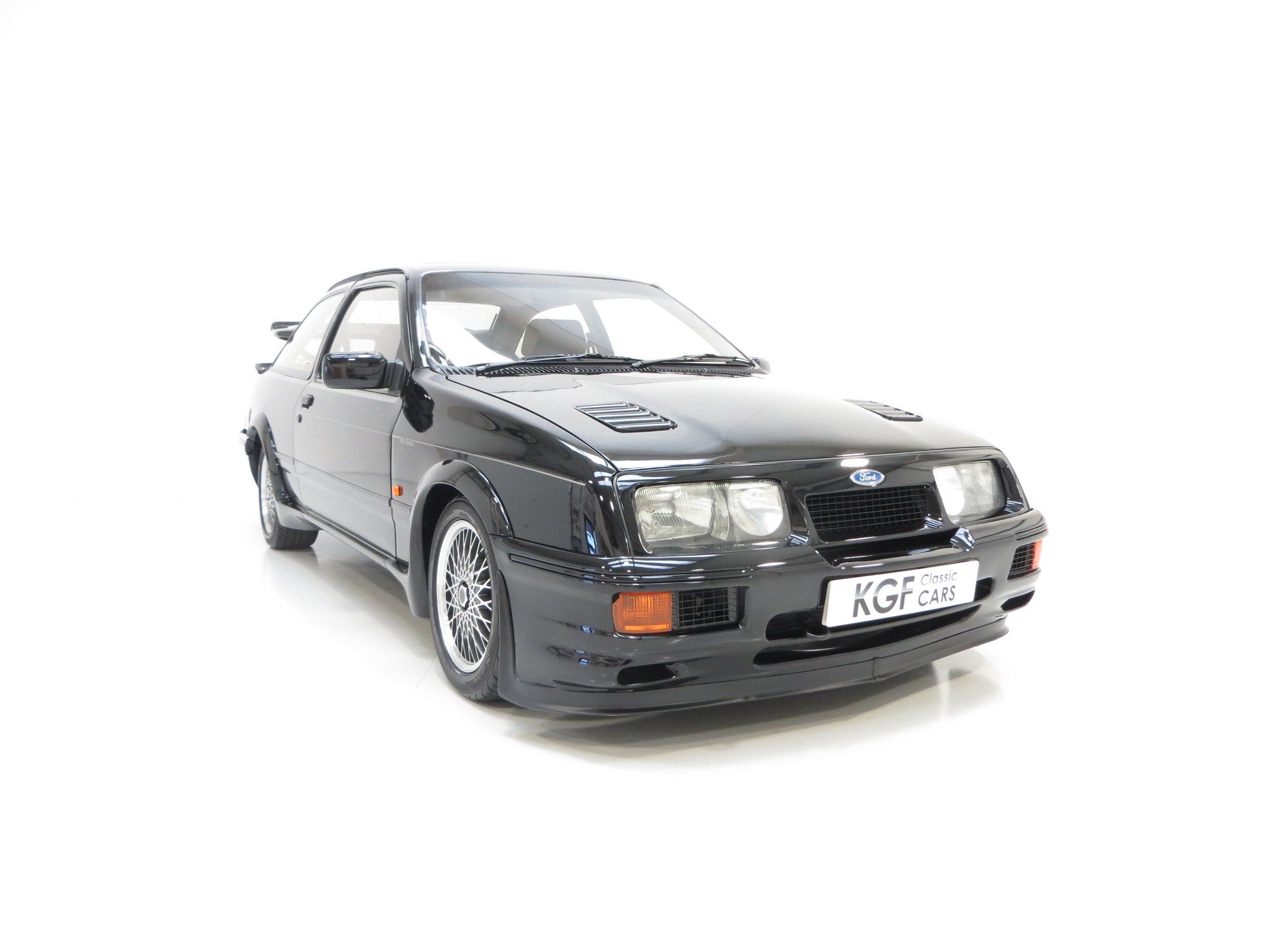 MODEL HISTORY
The Sierra RS Cosworth project was defined in the spring of 1983 by the then recently appointed head of Ford Motorsport in Europe. It was established that at the time, Ford was no longer competitive in this area. After receiving full support from Ford Public Relations, the project was underway with the Sierra chosen as the basis for the project. Ford Motorsport in Europe approached the automotive company Cosworth who answered positively, but put up two conditions: The street version of the car had to produce no less than 204 HP, and Ford had to accept no less than 15,000 engines. Few cars have ever been greeted with such enthusiasm as the original Sierra RS Cosworth, perhaps only the exclusive 500 cars that were developed to become an evolution edition, unbeatable on the track. Aston Martin at Tickford were assigned with converting the 500 cars, which in 1987 were to be announced as the RS500. Engineering differences aside, largely the cars were aesthetically similar to the standard Cosworth. The main differences being the additional boot mounted spoiler, discrete badges and the revised front bumper to aid improved cooling. This included the removal of the front fog lamps as standard, but with the dealerships offering reinstatement as an optional extra.

EXTERIOR
Presented in above average condition, this RS500 Cosworth has remained true to Fords vision finished optional Ford Black (code A6). The paintwork boasts a polished, uniform finish but it is not all factory original. All exterior trim, rubbers and glass are in good order and the imperative RS500 badges and decals are present. A small crack to the plastic front window vent and o/s front indicator lens is visible. The front lower splitter has remained true to shape and the original grilles in place of the fog lamps remain correct to the RS500 build specification. The ‘Go Perrys’ Ford number plates are still fitted front and rear. The ultimate 1980’s performance touring car, very special.

INTERIOR
The interior of this very rare RS500 remains trimmed in the original Ford Roma Grey (code S2) upholstery featuring Recaro front seats and matching carpeted door trim. The fabric seats coverings are in excellent condition with only slightly loose material to the drivers bolster and seat base. The carpets are clean and free from wear having been protected from new by genuine Ford carpet mats. The drivers door rubber has a slight cut. All dials and gauges operate perfectly including all electric warning lamps and the door open/bulb blown warning display. The dashboard displays cracks around the dash top speaker grille where an alarm sensor has been fitted and the headlining to the rear has dropped slightly. A clean boot area houses the original uncut parcel shelf with correct rubber hangers, now impossible to source.

ENGINE & TRANSMISSION
The original RS Cosworth powerplant warrants little introduction. Fitted with the standard 2.0 Dual Over Head Cam (DOHC) with the larger Garrett AiResearch T31/T04 turbocharger and intercooler, the motorsport pedigree of this car is unmistakable. With an impressive output of 224HP allowing the car to accelerate smoothly through 0-60 in 6.2 seconds and achieve a top speed of 153mph. The engine bay is original but does show age deterioration and a stainless steel exhaust system is fitted. The gear changes are positive and direct throughout the range, a real delight.

WHEELS, TYRES & BRAKES
The factory fitted 15 X 7 inch RS Sierra Cosworth alloy wheels housed within the flared arches are in pristine condition, and are shod in matching Yokohama 205/50 R15 tyres all round with excellent tread remaining. The original Dunlop D40 tyre on the spare wheel remains in situ. Diagonally split hydraulic circuits, anti-lock braking assisted 28.3cm ventilated discs up front and 27.3cm discs at the rear bring the car to a sure and steady halt.

HISTORY FILE
Registered new on the 27th August 1987, build number 284 of 500 has covered just 40,057 miles from new in the hands of one keeper since 1989, Mr Marshall. All-bar the first owner Mr Gray for two years, Mr Marshall and his companies have owned the car which is confirmed in writing by him and by service documentation. There is even a very early Ford Safety Recall letter addressed to his company Marshall Cooke. All handbooks, including the all-important RS500 Cosworth supplement, remain in the history file along with virtually every MOT certificate to verify the mileage. An independent report by renowned valuation experts, Julian Shoolheifer Limited, was carried out on 28th October 2014. KGF Classic Cars have taken the car to respected Mr Harvey Gibbs of Cosworth specialists, Supreme Car Services, for a full service and inspection including cambelt and tensioner as well as a MOT valid until 28th September 2016. One key fits all locks and ignition.

This vehicle will appeal to the discerning collector wanting a well preserved, low mileage example who is aware that this is one of only 352 cars made and will appreciate such cars are rarely offered to the open market.