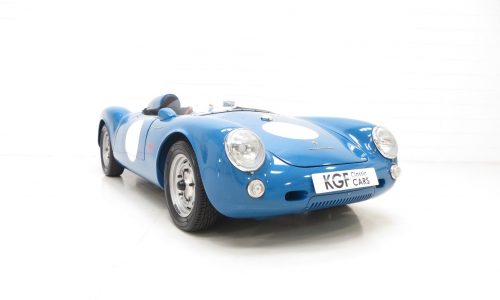 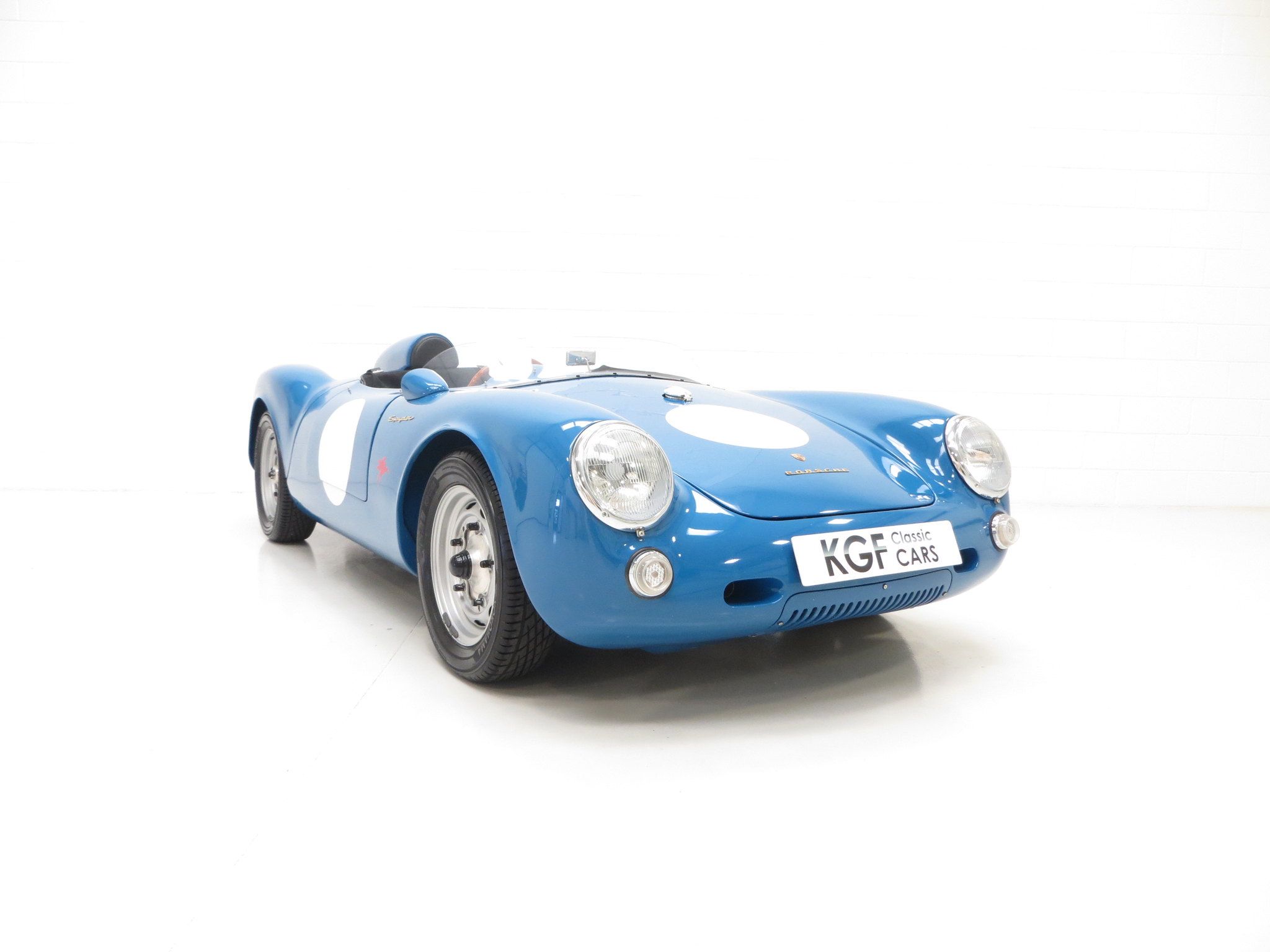 HISTORY
The limited number Porsche 550 Spyder was introduced at the 1953 Paris Auto Show and was quickly recognised wherever it appeared due to outstanding race success.  It dominated the US and European championship circuit even against more powerful cars not even in its class and was the race choice of privateers earning a reputation as the Giant Killer.  The beauty of the 550 was that it could be driven to the track, raced and then driven home, which showed the flexibility of being both a road and track car.  Perhaps the most famous Porsche 550 built was James Dean’s “Little Bastard” which Dean fatally crashed into Donald Turnupseed’s 1950 Ford Custom on the 30th September 1955.  Original examples rarely appear on the market and always make headline prices when they do.

EXTERIOR
Finished in vibrant period Porsche Blue there is absolutely no hiding in this incredible machine.  The sleek low slung appearance is gorgeous at any angle drawing much admiration from onlookers who marvel over the flowing yet purposeful lines.  The light weight bodyshell is free from stress fractures and has a deep gloss coat.  The gumballs positioned front and rear and on the doors just like the originals are blank.  The gold Porsche and Spyder lettering reveals the heritage and the stainless rear grilles and headrest faring leave no doubt of the fun lying ahead.  A must.

INTERIOR
Once in situ the Speedster style seats trimmed in black vinyl offer amazing support and looking over the wooden Nardi steering to the replica instrument set will start the pulse racing.  Securely fastened by the Willans racing seatbelts the driving position is near perfect and lack of creature comforts is soon forgotten once the starter button is pressed!

ENGINE & TRANSMISSION
Rear mounted and running a VW Type 4 engine displacing 2 litres built by Microgiant this power plant had been on the rolling road at BD Engineering and produces 110bhp and 122lbft of torque.  Sucking fuel through twin 40 Delorto carbs and barking through a custom stainless steel exhaust built by Aldens the sound is like no other!  A 4-speed rebuilt gearbox is controlled by an expensive American Janmar Shifter kit to utilise the power.

HISTORY FILE
Martin and Walker offer a Spyder Replica both as kit for self-assembly or as turnkey vehicle individually built to customer’s specifications. The Technic 550 Spyder as witnessed here is a true mid-engine replica of the original car and has been produced by M&W since 1987.  This example is number six of a run of 11 built by highly respected Paul Foreman in Kent.  Correctly registered as an historic vehicle on the registration document it passed to its current owner, John Litherland from Paul in 2007.  Known as Sacrebleu and even supplied with matching clothing this example has been enjoyed for local rallies and European trips to Le Mans and to Spa in Belgium.  Sacrebleu is reluctantly offered for sale due the owner’s arthritis.  A collection of invoices and old MOT certificates breaks down the 3,544 miles since being built.  A real motoring icon guaranteed to excite the fun loving petrol head or the 1950’s appreciating classic sports car fan.