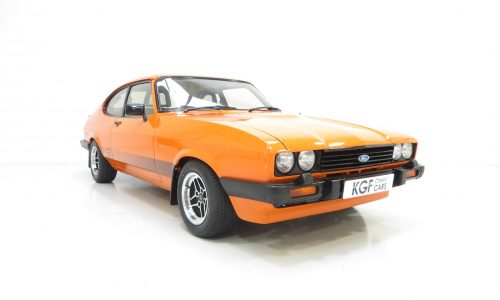 EXTERIOR
This imposing Capri 3.0S is finished in Signal Orange and has an almost flawless paint finish.  All exterior trim items and decals are pristine and the glass is number plate etched.  Rare factory options such as the steel tilting/sliding roof and tinted glass remain fitted and those seeking underside sparkle will marvel at the detail.  Equally impressive is the wow factor generated when the bonnet is lifted with polished perfection and Ford Motorcraft service items laid bare to see.  Dealer fit raised digit number plates are fitted along with a rear window sticker and period tax disc to the front screen.  Correct period mudflaps are fitted with the small Ford logo.  This very rare, sporting, top-of-range Capri is a usable show piece.   Simply breathtaking.

INTERIOR
This iconic model’s interior is distinguished by seats fully trimmed in the Black/White Carla fabric with Black Savannah and looks divine.  The deep pile black carpeting is spotless and the perforated headlining is tight although a little discoloured.  The three spoke leather sports steering wheel looks factory fresh and all controls and gauges fully function including the two-speed heater fan, analogue quartz clock and Ford push button stereo.  The boot area houses an almost unobtainable Motorcraft fire extinguisher and the rear package tray is straight and undamaged.  Unseen today, but even the passenger sun visor has the sunroof instruction sticker!  This is a very exclusive 70’s interior exactly true to the manufactures intentions.

ENGINE & TRANSMISSION
With a choice of three engines this model is fitted with the range-topping Essex 3000 V6.  Stripped right down to its bare components by former owner, a licensed aircraft technician by trade, and fitted with discreet improvements such as a Kent V63 camshaft, Accralite pistons and Ashley manifolds it produces 185bhp, enough to propel the car to 60mph in 8.0 seconds and on to a top speed of 124mph.  An intoxicating burble through the stainless steel exhaust system is very addictive!  The 4-speed manual gearbox with synchromesh to all forward gears operates correctly.

HISTORY FILE
Coveted by collectors the Capri 3.0S is the most difficult car you promised yourself due to the rarity of the model.  With just five former keepers and featured in numerous magazines, including the front page of Practical Classics 2015 Guide to the Ford Capri, this stunning rebuilt detailed example is a show car.  Numerous invoices, previous MOT certificates and documentation is included.  A handbook and service book is also present.  Another accolade is an eight page feature in Concours Ford on the car.  Likely to appeal to a Ford aficionado who is keen to enjoy the show scene and wants to dazzle the crowds with this prime example.