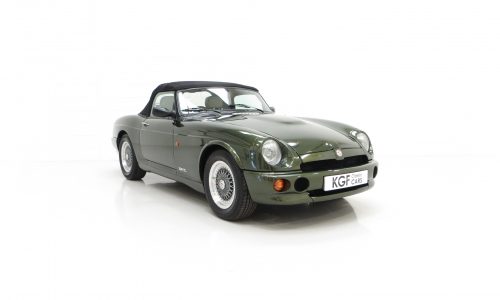 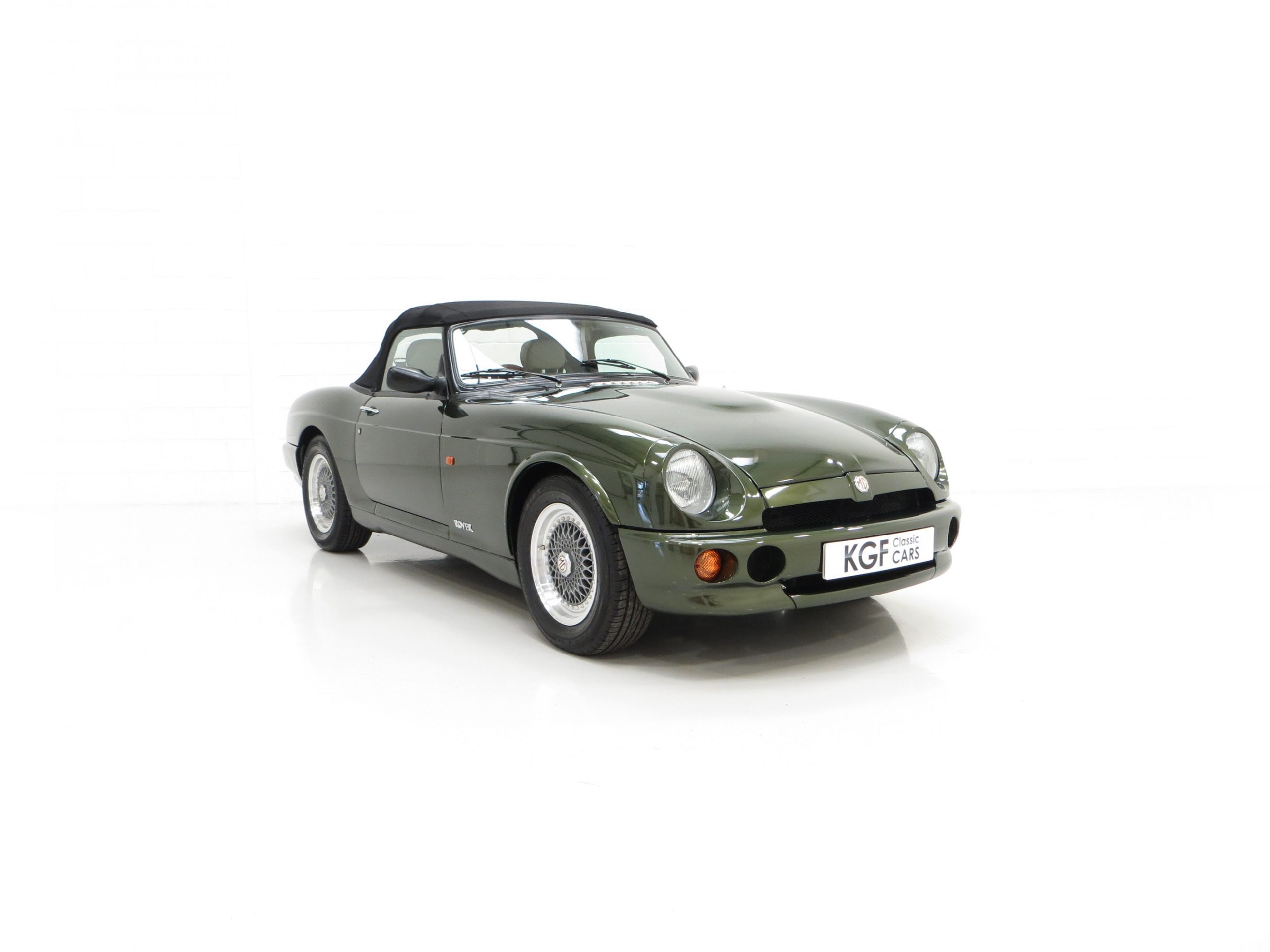 MODEL HISTORY
The MG RV8 was bought to fruition by Rover Special Projects team, a team of 30 planners, engineers and designers based at Gaydon, Rovers test track in Warwickshire. Headed by RSP Director, Steve Schlemmer, the project was called Adder in recognition of the Anglo-American Cobra of the 60s, their objective was to recreate the MGB as it would have been had it never left production. Launched at the British Motor Show in 1992, the MG RV8 marked the welcome return of the MG sports car and the famous octagonal badge. Launched at a price of £26,500 when new with the slogan ‘The Marque has returned’, just 1,983 units were made of which 1,581 were sold to Japan.

EXTERIOR
An appealing, curvaceous, wasp-waisted style immediately recognisable to MG aficionados is finished in optional pearlescent Woodcote Green, (Code HPE) at a cost of £750 when new. A stunning deep gloss finish has been preserved by the two fastidious UK owners since the car arrived from Japan in 1998. The correct panels produced by Abbey Panels are virtually unmarked other than a tiny scratch to the nearside front wing. The original factory fitted soft top made by Tickford is pristine and the rear screen perfectly clear. The rear tonneau is present and a very well-designed bespoke wind deflector is neatly fitted and framed in matching beige leather. The famous octagonal MG badging is bright and unmarked and all chrome brightwork has a mirror finish. An enduring British motoring classic with this example being difficult to fault.

ENGINE & TRANSMISSION
The 3.9 litre V8 is extremely flexible with large reserves of torque and 190bhp giving effortless midrange overtaking. 0-60mph is despatched in 5.9 seconds and a top speed of 135mph is quoted. The engine bay is spotlessly clean and factory original with all markings, plates and stickers present. The V8 burble through the twin exhaust pipe is intoxicating. The robust Land Rover built 77mm 5-speed gearbox changes with reassuring precision and a progressive light clutch action. Delightful.

HISTORY FILE
The MG RV8 was always destined to become a classic with just 1,983 units made reviving a golden history and celebrating thirty years after the birth of the legendary MGB. This pampered low mileage example spent four years with its Japanese owner who purchased the car new in 1994. A Rover Group British National Type Approval Certificate of Conformity confirms the date of manufacture the 18th October 1994 and in 1998 the vehicle was repatriated with all importation documents and UK registration completed. The history file is superb with the two UK owners keeping every single MOT certificate from the very first in 1998 along with a large file of specialist invoices and receipts for servicing and maintenance work. A diary of maintenance has been kept and in 2009 there was a documented and photographed speedometer change carried out at 11,978 miles, the odometer now reading 5,109 miles. The second of the UK owners purchased the car in 2017 where is sat alongside his fully restored MGB GT LE. Both sets of keys and code tags are present along with two MG RV8 The Marque has returned’ sales brochure as well as a price list and an official MG 1930-1992 history of the Marque released when the RV8 was launched. Finally, a cherished registration M88MGR remains with the car. This stunning example is a must for anyone seeking a rare, pampered and enthusiast owned example of MG motoring history.