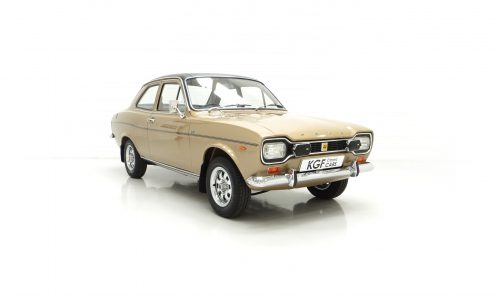 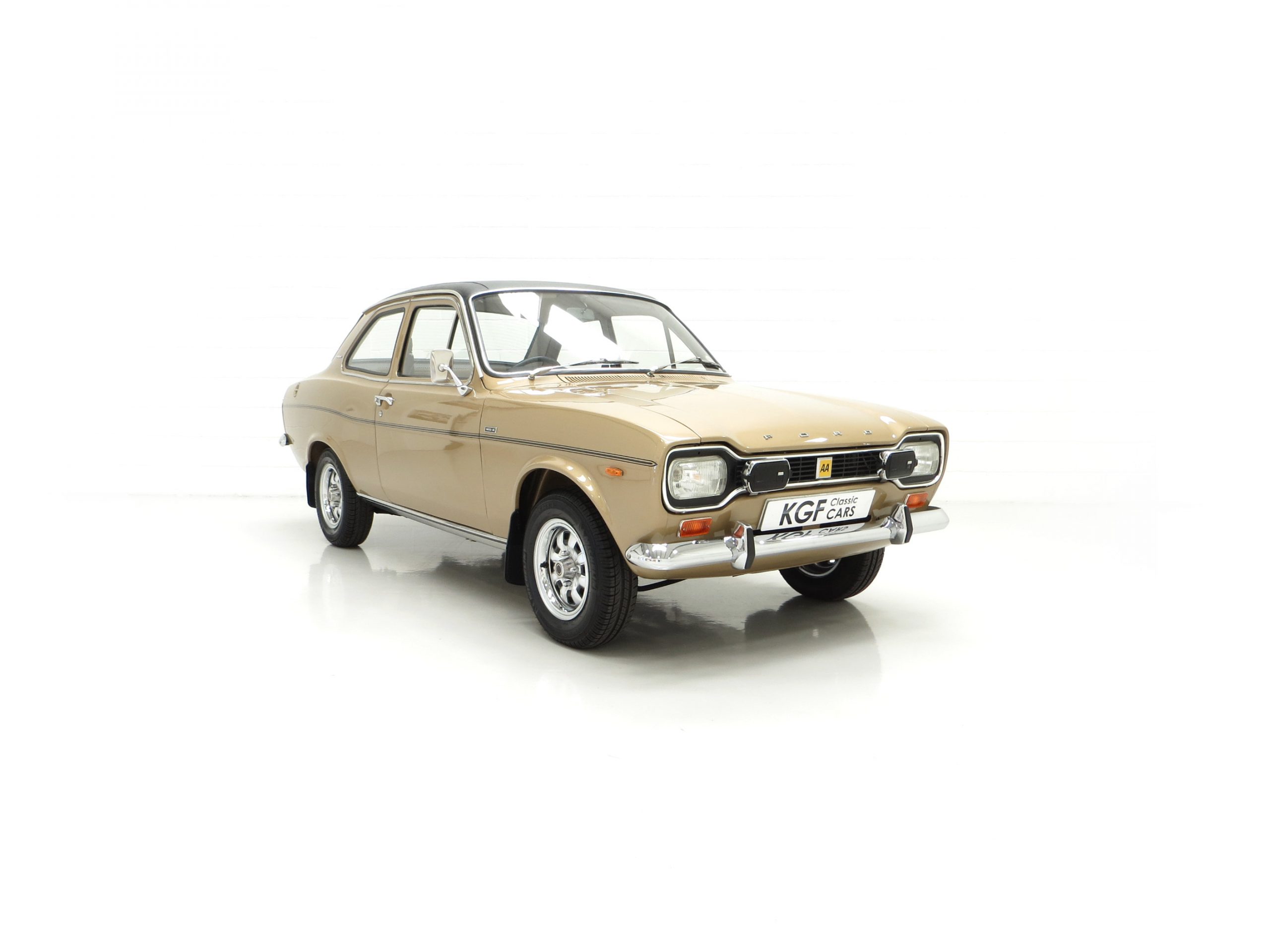 An unspoilt and rare Mk1 Ford Escort 1300E Campaign Model with only 7,490 miles.

MODEL HISTORY
The model’s name 1300E was born from a simple concept, a 1300cc machine with high-class accoutrements that resulted from a demand by Ford bigwigs for a luxury Escort, the ‘E’ was to stand for Executive. Ford’s specialist plant at Aveley was ailing with less than worthy profits so the development of the 1300E was the perfect opportunity to bolster its Advanced Vehicle Operations (AVO) division. Primarily based on the Escort GT specification, a 1300E started life as an Escort Sport from the Halewood Plant where it was given a slam panel data plate reading SPCL CAMPAIGN (Special Campaign) and fitted with a rectangular headlamp panel, upgraded cloth interior and painted in the specified colour. All but complete, the cars were then shipped to Aveley where an assembly facility added the 1300E extra equipment and trim. Workers who would usually be building the RS1600 and Mexico turned their hands to the 1300E which was assembled on a separate line. All pre-October 1973 1300E’s were completed at Aveley and helped to keep AVO viable, these cars being referred to as the Series One. The later cars or the Series Two were fully finished at Halewood and production finally ended on the 16th December 1974 with 6,768 two-door and 4,022 four-door cars built, according to Owner’s Club records.

EXTERIOR
Finished in factory optional Amber Gold Metallic, (Code L), this example has covered a genuine 7,490 miles from new and is presented in outstanding unspoilt condition. The paintwork is near flawless having benefitted from a professional repaint in 2008. Photographs taken prior show the car in superb order with just some minor cosmetic deterioration from the cars long term storage. All panels are factory fitment and no structural repairs have ever been undertaken nor required. 1300E aficionados will recognise this Aveley assembled Series One by the fixed side rear windows as opposed to the openers fitted to the Series Two and the super eagle-eyed experts will note the incorrect 1300E wing badges. The correct badges for a Series One would read only 1300 but the first owner changed these as he wanted the car to be recognised unmistakably as a 1300E! Underneath the car is outstanding with the correct original slant rear shock absorbers in black to denote Ford units rather than the blue Armstrong parts as well as the black anti-roll bars and even the cardboard undertray which is long lost on most cars! All trim sections are original and in superb order with some very light tarnishing to some chrome pieces. A benchmark car for anyone wanting to recreate a factory correct Series One 1300E.

INTERIOR
A interior every inch as expected with the mere 7,490 miles covered. The ribbed cloth interior in Tan, (Code K1) is fitted as standard on the luxury 1300E and are in fantastic order. The wall-to-wall cut pile carpets, putty headlining and real wood veneer panels are all original with slight lineage to the passenger wood facia. All equipment and functions operate and the experts checklist will be ticked with correct smaller glovebox knob for earlier cars and incredibly there is even the cleverly concealed original ice scraper sat inside the centre console, long since lost or snapped on most cars! Inside the boot area is the original hessian bag with grey jack and black plastic inner light cluster protectors and lack of boot lamp, all correct for earlier cars. Even PDI tags are still affixed with string inside the boot area! Window etching to the factory glass is present along with the Triplex Hotline sticker in the rear screen. As close as you are likely to get to a 1973 showroom fresh 1300E interior.

ENGINE & TRANSMISSION
Ford took the 1300cc Crossflow engine from the GT model which developed 72bhp and achieved 0-60mph in 13.3 seconds whilst reaching a top speed of almost 100mph. The factory fitted engine sits in a beautifully clean and unspoilt engine bay with all factory stickers, plates and labels and the original chassis stamping to the inner wing. The factory data plate reads SPCL CAMPAIGN (Special Campaign) which is correct for a Series One car. Originality even extends to the factory wing/slam panel seam welds, genuine Ford hose clips and washer bottle. The under bonnet insulation pads have been replaced. The four-speed manual gearbox is light and precise.

WHEELS, TYRES & BRAKES
Five-inch sports styled road wheels are standard 1300E specification in silver fox with satin black inner sections as well as the rim embellishers, aluminium centre caps with black middle/chrome ring and the UNF chrome domed wheel nuts. Premium brand Michelin Energy tyres are fitted to all road wheel and original seekers with be delighted to learn that all five factory fitted Michelin ZX tyres in excellent condition have been retained having covered such low miles! GT-spec disc brakes were fitted to the front of the 1300E and this factory standard system feature servo assistance and even the original brake fluid reservoir cap reading ‘use FoMoCo brake fluid’.

HISTORY FILE
Built in March 1973 and registered new on the 1st August 1973, the car was supplied by Ford Main Dealers, Invicta Motors Ltd of Margate and Ramsgate. The first registered keeper was Mrs Skinner followed by her husband who owned the car until 2007. When the third owner bought the car from Mr Skinner it had covered just 3,450 miles! In 2008 a full re-paint was undertaken by professional experts, Mabel Coachworks in London. The history file is beautifully organised and presented with many photos of the car prior to the repaint proving how undamaged and rust-free it was. The history file traces all five owners in total and the large file contains the original handbook, tax disc holder from the selling dealer, invoices, previous MOT certificates, condition reports and agreed valuations. KGF Classic Cars are immensely proud to have acquired what is certainly one of the best, low mileage Mk1 1300E’s in existence.