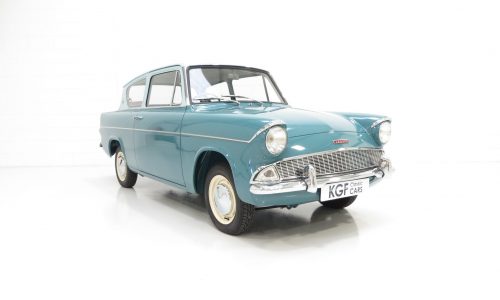 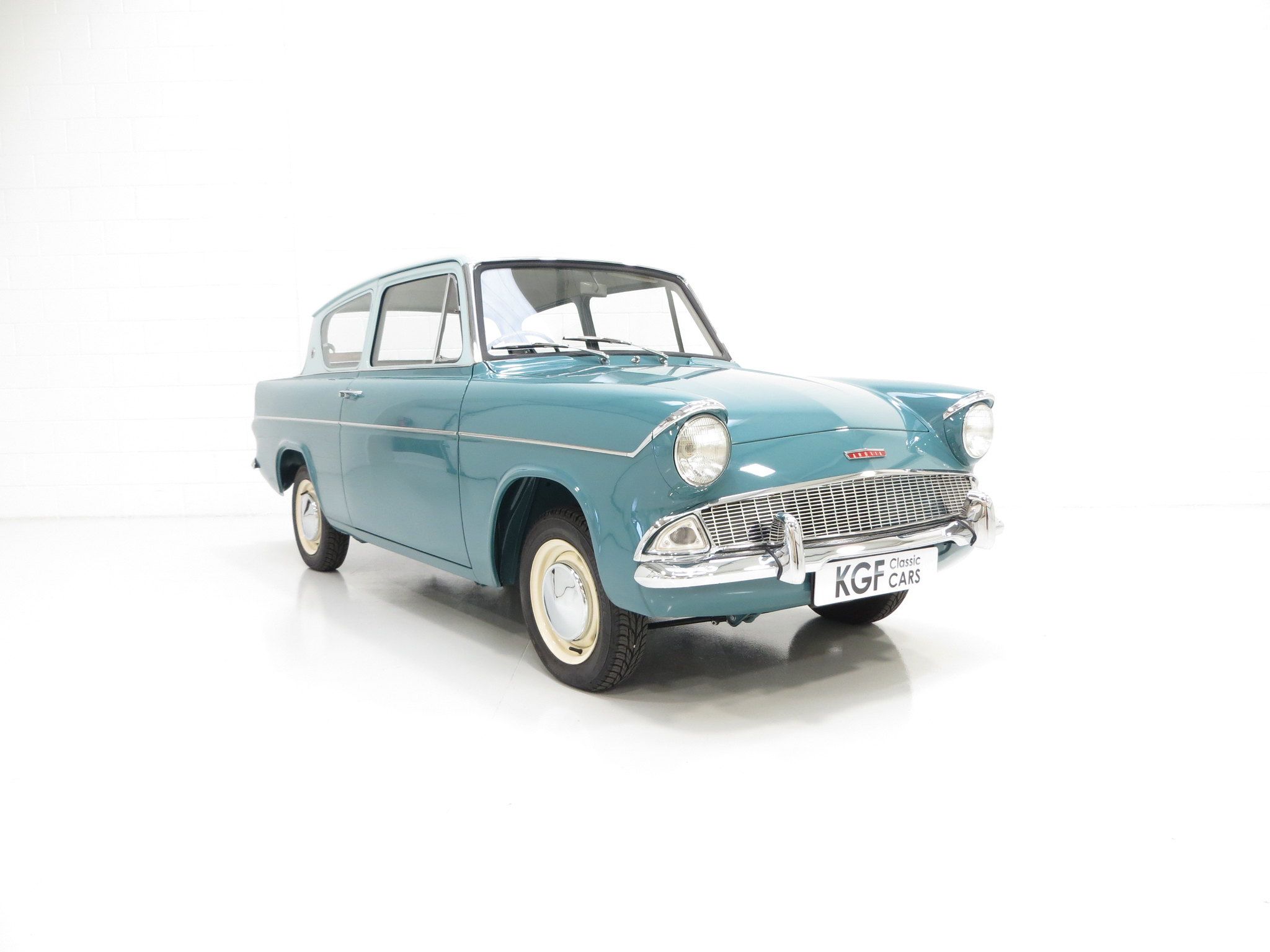 EXTERIOR
This incredible Ford Anglia 105E is finished in two-tone body painting of Shark Blue and Pompadour Blue and is flawless in every respect.  A painstaking approach for perfection by the second current owner is demonstrated by arrow straight panel gaps as a result of many hours applying lead loading.  Respected restoration specialists, Jules Bodycraft in Wolverhampton satisfied the owner’s desire for a 1960 Ford showroom experience and recently dated invoices totalling £16,075.63 prove this.  Every millimetre of chrome brightwork sparkles having been rechromed in 2014 at considerable cost and the underside is nut and bolt spotless having removed all the old paint and underseal.  The engine bay will amaze onlookers and has been meticulously detailed and the glass, rubbers and lenses are as new.  Truly breathtaking.

INTERIOR
The spacious interior of this remarkable Ford Anglia is a collectors dream.  The two-tone PVC seat trim matches the exterior beautifully and both owners have amazingly never removed the clear plastic film protecting the rear seats from new!  The door cards, headlining and ornamental metal dash is pristine and only the driver’s seat shows slight aging.  All controls, gauges and switches function perfectly including the optional for 1960, fresh air heater and demister.  Simply devine.

ENGINE & TRANSMISSION
The 4-cylinder, water cooled 997cc was new at the time and introduced the famous Kent code name to Ford.  Technical innovations allowed 39bhp and 53lbs/ft of torque to be produced while returning 40 plus mpg.  The original matching numbers engine has been completely rebuilt at Willenhall Engine Services at a cost of £1,200.  It is fully converted to accept unleaded fuel without the need for additives.  The close-ratio 4-speed gearbox with a snap-through change is fabulous.  As factory standard, there is no synchromesh on first gear.

HISTORY FILE
First registered on the 16th May 1960 and bought brand new by Mr William Berry from authorised Ford Dealers, Rumsey Limited in Bristol.  Cherished by him for 21 years until the second and only other custodian, Paul Guinness (now a well-known classic car journalist) purchased the vehicle in June 1981, as Mr Berry ‘upgraded’ to a new Fiesta. Paul was just 16 at the time.  The car had covered 56,000 miles at that point and the current low mileage of 69,210 has been reached during the 33 years that Paul has owned the car.  Although Paul learned to drive in this Anglia as soon as he passed his test he bought another Anglia for everyday use this example was used only sparingly for shows and club meetings.  Paul co-founded the Ford Anglia 105E Owners’ Club in 1982 where this car was a regular exhibit on the NEC club stand.  The car was kept on the road during the summer months through to 2005 when Paul decided that in 2013 it should undergo a full strip-down and rebuild to make it one of the world’s best examples.  Undoubtedly whoever buys it now will be getting the best-presented Anglia of its type, its restoration having cost more than three times the asking price alone.

The car comes complete with a professionally made plaque display board showing some of the events it attended in the 1980s, as well as a ‘silver’ plate that it won at a MkI Cortina OC event for Best Visitor’s Car.  Supplied are the original framed sales invoice, a host of old tax discs, plus a selection of original Anglia brochures, a parts book and much more.  An amazing opportunity.