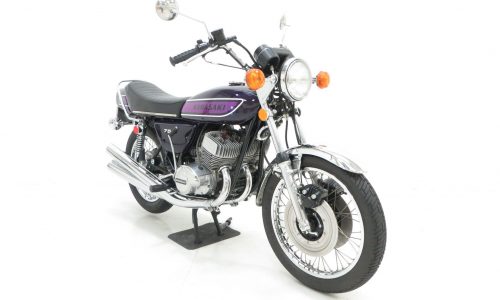 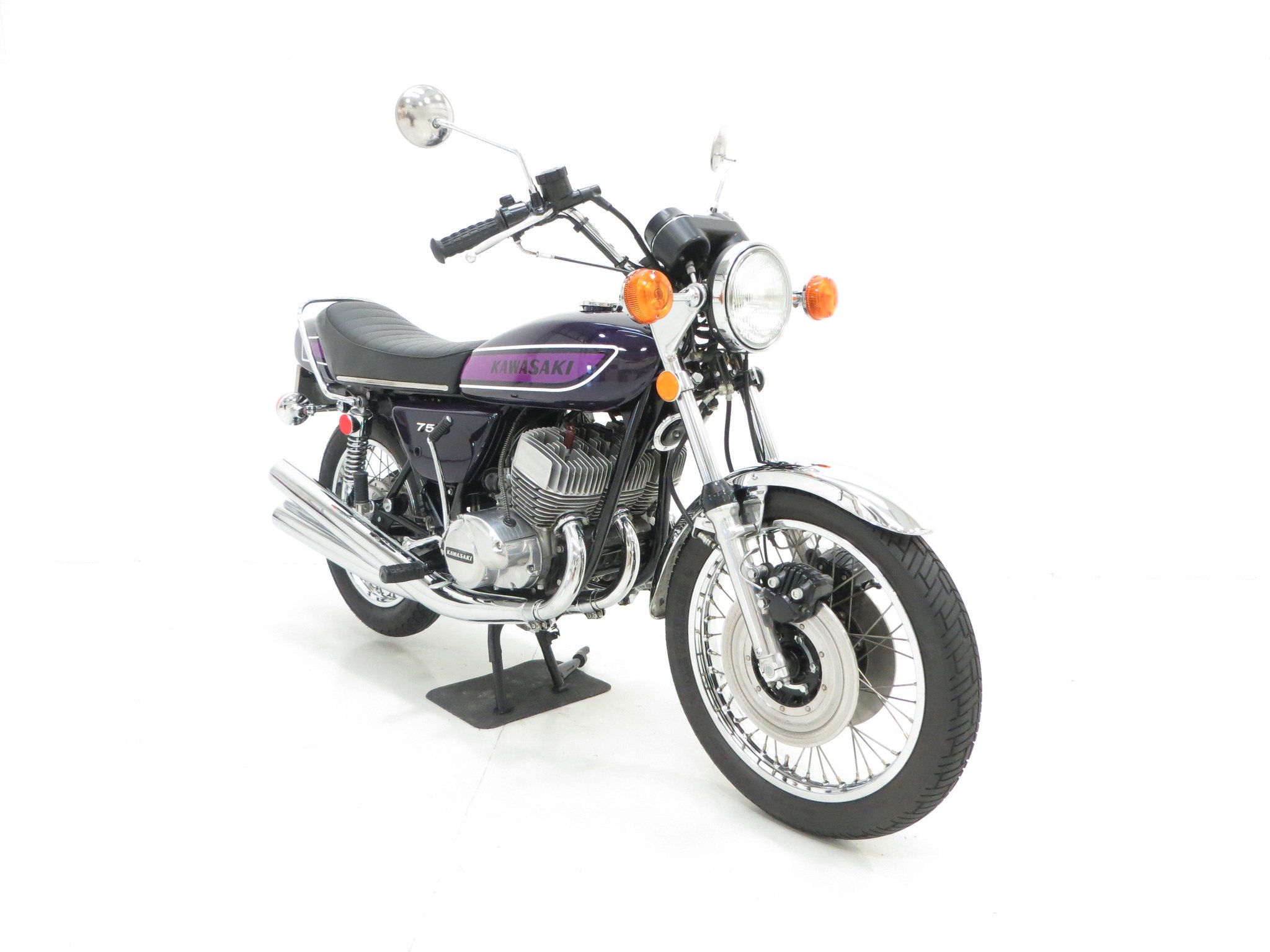 A ‘King of the Streets’ Kawasaki 750 Mach IV H2 in award winning condition.

MODEL HISTORY
The Kawasaki 750 Mach IV H2 was part of the iconic Kawasaki ‘Triple’ range produced from 1968 to 1980 with motorcycles ranging from 250-750cc, the more powerful 750 H2 model being nicknamed ‘widow makers’ owing to Kawasaki’s penchant for producing large engine bikes but still with skinny tyres, flimsy frames and inadequate brakes! Upon release they were the fastest production bikes in the world. Renowned as the ultimate full on Triple experience, the incredibly thirsty ‘King of the Streets’ 750 Mach IV H2 was eventually discontinued having succumbed to an impending oil crisis and strict incoming safety regulations, factors that would bring an end to a generation of raw and industry changing motorcycles.

EXTERIOR
Finished in Candy Purple, one of only two colour options available for the 750 Mach IV H2 model, this matching numbers US example has gained award winning status with its long term club owners, having entered into the UK in 1993. Correct US specification features include no rear mudguard, no seat strap and circular side reflectors. The pristine and correct Candy Purple paintwork catches the sunlight in an amazing almost psychedelic manner and is delightfully 70’s! Beautifully detailed in every respect but not to the detriment of originality, all components are in remarkable order and the chassis and engine numbers clearly visible for inspection. Likewise, the almost ornate asymmetrically arranged three branch exhaust system displays clear part number stampings. Lifting the seat reveals further delights such as the original spark plug holder, (with plugs), and complete toolkit in the plastic pouch. All manufacturer stickers and notices are clearly intact and an owner’s manual is in situ under the seat. The factory fitted seat, grips and rubbers can all be described as excellent. A truly exceptional example of the Kawasaki’s that took the 1970’s biking world by storm.

ENGINE & TRANSMISSION
The three cylinder two-stroke air-cooled engine has a 748cc displacement and produces 71bhp at 6800rpm. A standing start ¼ mile of 12 seconds was quoted along with a claimed top speed of 126mph. Features such as the capacitor discharge ignition (CDI) remain exactly as the manufacturer intended. The 5-speed ‘all up’ constant mesh transmission with wet multiplate clutch operates perfectly. It is crucial to emphasise that this collector’s example is not just a show piece but has been maintained and importantly used as intended in dry conditions. A guaranteed smile on the riders face experiencing the ‘Triple Tingle’ amid an intoxicating soundtrack and cloud of blue smoke in their midst!

WHEELS, TYRES & BRAKES
This exceptional example retains its beautiful original chrome wire wheels to uphold the classic look. In outstanding condition, the wheels are shod in premium quality Metzeler tyres of size 3.25-19 54H and 4.00-18 64H (front and rear) with masses of tread remaining.
The braking system has the very expensive twin 295mm front disc factory option incorporating a 5/8 master cylinder, (replaced but included), and different a banjo to feed the brake fluid to both discs. The 203mm rear drum has the working wear indicator.

HISTORY FILE
This final model 750 Mach IV H2C example was manufactured in 1975 and supplied to the US market. Imported to the UK in 1993, the bike has had just five UK keepers. Acquired by KGF Classic Cars from the Late Mr Ian Richards who had cherished this incredible bike from 1999 having previously owned three ‘widow makers’ in his younger years. An avid and well known club member, regular outings and two club rallies’ per annum have ensured this bike has been enjoyed as intended. The award winning credentials include ‘Best in Show’ at the Kawasaki Northern (National) Rally 1999 presented by ‘Triples’ Guru Rick Brett, and the 2000 VJMC ‘Most Outstanding H2’ presented by legendary former Kawasaki Work’s racer Mick Grant.

Ian Richards was the hugely knowledgeable and devoted long term owner of 18 years and had preserved this incredible bike to the highest level, even down to the fitting of an almost indistinguishable Z750 kick start in order to retain the slightly thinner cast H2 original, which were prone to snapping under repeated use. He even had the foresight and awareness to remove the bottom exhaust bolt, largely the cause of increased tension and resulting in the original pipes cracking. The following custodian, Mr Dean Marshall travelled the length and width of the country viewing so called ‘immaculate’ bikes before snapping this one up immediately knowing the pedigree. His decision to sell after three years of pleasuarrble ownership is the opportunity to buy another iconic and lifelong dream motorcycle, an RD500 Yamaha YPVS. Completing the history file is an Owner’s Manual and Owner’s and two production Kawasaki H1 and H2 sales brochures. This 750 Mach IV H2 is an absolute must for the avid collector where inspection and trial will not disappoint. A rare unmissable opportunity indeed!