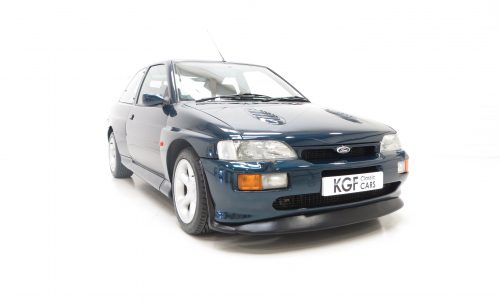 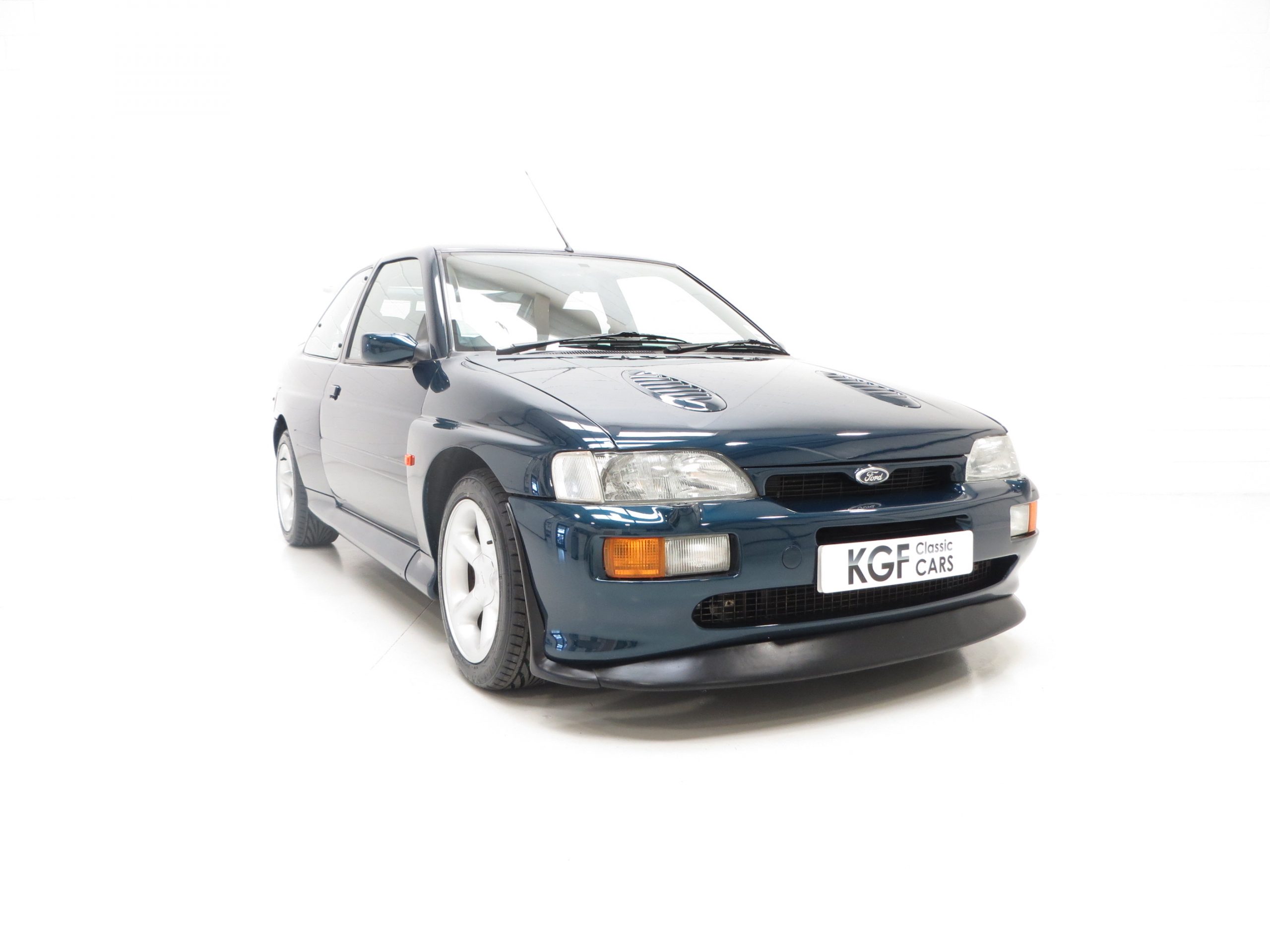 EXTERIOR
Finished in striking Petrol Blue, (Code C5), available only in late production models between November 1994 and December 1995, this is a very rare colour.  The paintwork boasts a uniform shine guaranteed to attract admiring glances.  Markings and hairline scratches are visible upon close scrutiny and all exterior trim sections, lights and badges are excellent.  The driver’s door weather strip is lifting slightly to the edge.  The iconic whale tail spoiler is fully intact and vulnerable black lower extension to the front bumper has been replaced.  Ford window stickers remain attached including the Ford Security System and supplying dealer rear window sticker.  A true Ford RS legend.

INTERIOR
The interior of this Escort Cosworth Lux Edition is absolutely original and just as Ford intended.  The Recaro seats finished in the Polaris Grey Hex cloth, (Code LW), are immaculately clean and free from wear.  The seat bases and bolsters remain tight and have retained all shape, and even the delicate piping to the seats have avoided the wear commonly suffered in many examples.  The cut-pile carpets are clean and unworn.  The standard Ford radio/cassette, Model 2007 RDS sound system remains fitted, as does the optional Ford CD player, model 2040.  A Bluetooth Parrot system is fitted but not tested.  The boot area is pristine and houses the factory fitted space-saver spare wheel and correct jack.

ENGINE & TRANSMISSION
The RS Cosworth powerplant warrants little introduction.  Fitted with the factory standard Generation Two Ford EEC IV electronic engine management system and Garrett AiResearch T25 turbocharger and intercooler, the motorsport pedigree of this car is obvious.  With an impressive output of 217HP, the car accelerates rapidly through 0-60 in 5.7 seconds and reaches a top speed of 144mph.  The clean engine bay displays factory seams and weld dots to the wings along with original stickers and slam panel stamping.  Motorcraft hoses and ancillaries remain fitted and genuine Motorcraft filters have been used for servicing.  The permanent Ferguson four wheel drive system with 34/66% front/rear power split mated to a MT 75 5-speed gearbox is light and direct.

HISTORY FILE
Built in December 1995 at the Rheine Assembly Plant in Germany, this factory specified Luxury model was registered new to its first owner on the 14th March 1996 by Ford RS Agent Bristol Street Motors of Worcester.  Just six former keepers in total have enjoyed this Escort Cosworth including respected Ford guru, Kevin Sharp, who along with Martin Hadland at Reyland Motorsport broke the 1/4 mile record in 2003 with a time of 10.4 and 138mph terminal.  A six page feature in Fast Ford magazine details this fabulous car and is included in the history file.  Now returned virtually to standard specification an invoice in the history file for £963.83 dated March 2017 details a service, cambelt and tensioner carried out by renowned Cosworth expert Harvey Gibbs of Supreme Car Services.  The original Ford wallet contains all handbooks, radio instructions, guides and point of sale literature as well as the red master key with code tag.  Completing the history is a folder of invoices and previous MOT certificates.  An excellent example of this iconic RS product.