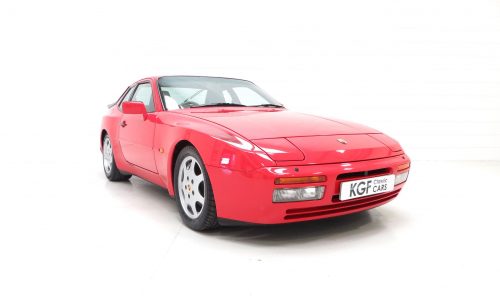 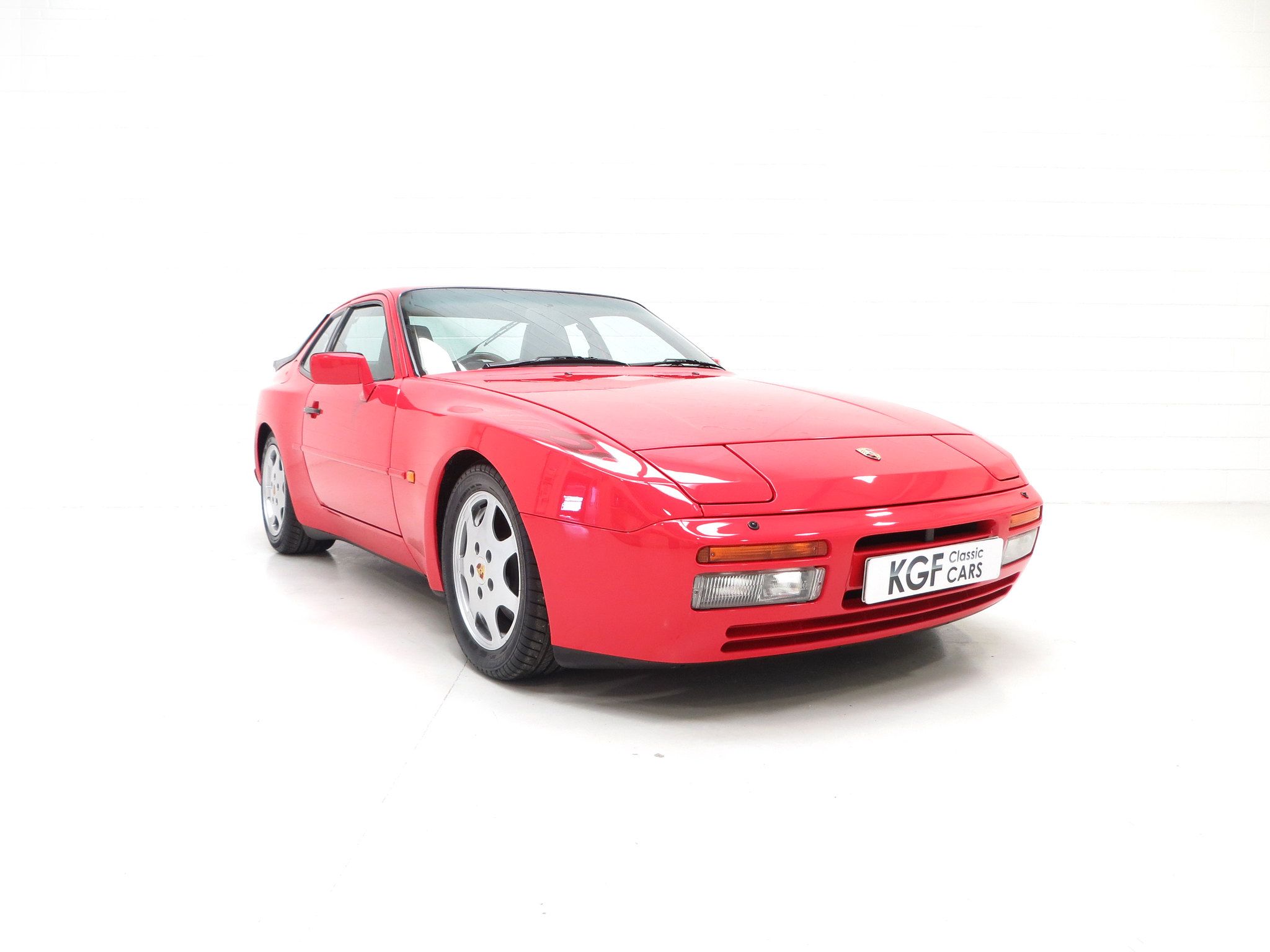 MODEL HISTORY
Initially there were 1000 Porsche 944 Turbo S cars introduced in 1988 and all built in the Silberrosa or Silver Rose metallic paint of which just 77 cars were sold in the UK.  Following the initial run of Silver Rose cars customers were offered the choice of interior and exterior colours for their Turbo S and a subsequent 635 cars were made.   Improvements included the M44/52 engine (with a new turbocharger, modified turbine vanes, larger exhaust valves and enhanced DME mapping), a stronger clutch, transmission with an oil cooler and limited slip differential, plus larger 12″ front disc brakes (similar to the 928 S4), adjustable Koni suspension (via the M030 option package) and special ‘Club Sport’ alloy wheels. At £41,249 when new is was more expensive than the 911 Club Sport.

EXTERIOR
The muscular lines of this sought-after variant still look amazing today finished in Guards Red, (Code L3MA).  The unique ‘Turbo’ decal on the offside front wing is ostentatious and acts as a reminder of the original homologation Porsche 924 Carrera GT Turbo and of the exclusivity this car enjoys.  Subject to a documented windows out repaint by the fastidious previous owner whose ambitions were to compete in Concours, the finish can be described as stunning, with noteworthy PCGB awards acting as a testament to the condition.  All trim, rubbers, glass and lenses are perfect with a slight ding to the bonnet front centre.  Truly outstanding.

INTERIOR
Finished in the optional Black Leatherette material, (Code LT), the orthopedically designed sports seats are pristine along with the rest of the gorgeous interior.  The sense of occasion is maintained once settled in the commanding cockpit with a wealth of working crystal clear instrumentation such as boost pressure gauge.  There are no cracks to the dash and the carpets are spotlessly clean having been protected by genuine Porsche carpet mats.  The car comes complete with its original space saver wheel, full tool kit (unused), aluminium brace, jack and the very often missing, tyre compressor!  The boot option sticker remains attached.  The perfect performance interior.

ENGINE & TRANSMISSION
The 944 Turbo S four cylinder inline M44/52 engine produces 250bhp at 6000rpm to propel this car to 62mph in 5.7 seconds and a top speed of 162mph.  This more powerful engine is developed from the specification used in the Porsche 944 Turbo Cup race series with factory enhancements such as a new turbocharger with modified turbine vanes, slightly larger exhaust valves and modified DME mapping.  The engine area is detailed to virtual perfection and a free-flowing exhaust system is fitted.  All the belts, pulleys and water pump was replaced in October 2018.  The modified transmission changes include hardening of 1st and 2nd gears, and the transmission oil is externally cooled allowing precise and solid gear changes.

HISTORY FILE
Supplied new on the 1st October 1988 by Glen Henderson official Porsche Centre and registered to them as the first owner.  A further four former keepers have enjoyed this low mileage example with servicing records from 1988 with 733 miles travelled right up until the present day.  The Porsche Certificate of Authenticity confirms the chassis and engine numbers conform to the specific ranges for these limited-run cars.  A box full of trophies with PCGB Concours judging sheets is also included in the thick history file. To complete the appearance of this show-standard Porsche is the number plate ‘A944 TBO’.  Sold by KGF Classic Cars in March 2017 this example has continued being cherished and meticulously maintained and we are delighted to offer it once again to market.

A complete set of keys, and all Porsche handbooks including the 944 Turbo S Supplement is included in the burgundy wallet.  A very rare limited edition model and much sought-after by Porsche enthusiasts.