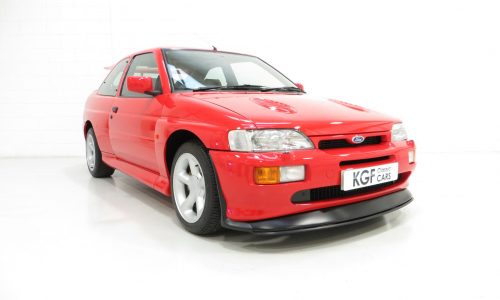 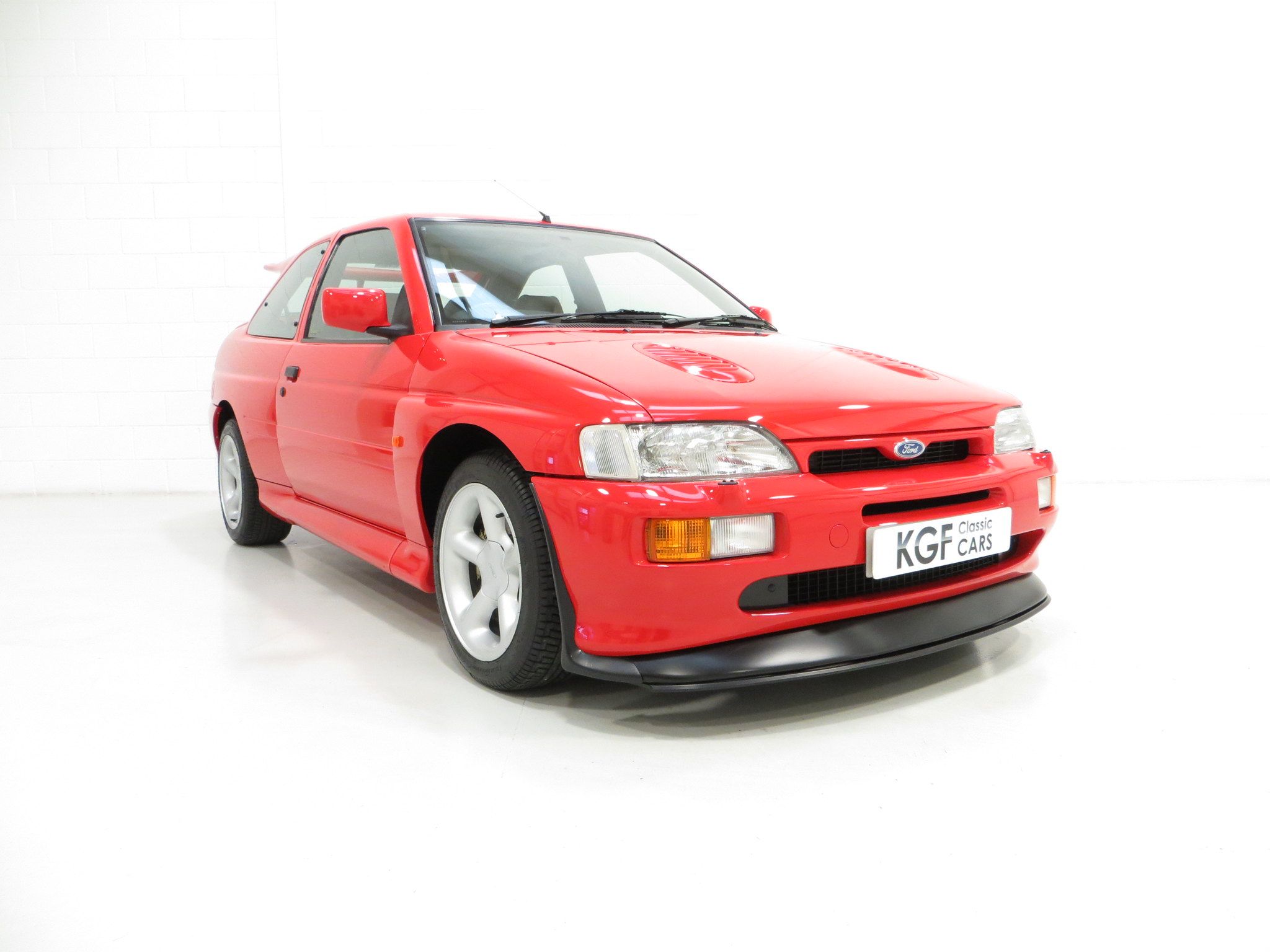 MODEL HISTORY
The Ford Escort RS Cosworth was a sports derivative and rally homologation special of the fifth generation Ford Escort. It was designed to qualify as a Group A car for the World Rally Championship.  It was available as a road car from 1992-96 in limited numbers from Ford’s Specialist Vehicle Engineering, (SVE), Group.  It combines the hand-assembled engine expertise of Cosworth and the coach-building crafts of Karmann.  In order to accommodate the larger Cosworth engine and transmission Ford developed the car around the chassis and mechanicals of its predecessor, the Sierra Cosworth.  A very rare car with only 7,145 examples being produced with the first 2,500 units being Big Turbo Homologation cars.   (Source Wikipedia, 1995 Edition One RS Brochure and the RS Owners Club).

EXTERIOR
With 200 hours detail development in Fords Cologne wind tunnel the rally-bred innovation of this model is instantly recognised.  Finished in desirable Radiant Red, (Code U 7), the finish can be described as impeccable. A reflective gloss finish will amaze onlookers and a testament to the cars appearance are various Concours awards at prestigious RS Owners Club shows.    The three-position front adjustable splitter is perfect and the underside is an exhibitors dream with every component gleaming and as new.  Factory markings, stampings and stickers are all present and correct.  The colour-coded fuel filler cap and large door mirrors of early Big Turbo cars along with every inconceivable detail is correct.  Undeniably one of the best in existence.

INTERIOR
The interior of this early Escort RS Cosworth Lux Edition is as new and exactly as Ford intended.  The Recaro seats finished in Raven Leather are divine with a fullness only witnessed on incredibly low mileage examples never exposed to ultraviolet light.  The desirable early leather covered steering wheel with three horn buttons remains fitted.  Being one of the first 2,500 cars the pristine boot area still has the water injection kit never plumbed in and unused to comply with homologation. Most were removed by the Ford dealers to avoid customer confusion.  A Ford immobiliser has been fitted from new along with Ford carpet mats.  Stunning.

ENGINE & TRANSMISSION
The powerful and well proven Cosworth 2.0 litre 16v turbocharged YBT engine features the larger Garrett T3/T04B turbocharger with a two-stage water/air and air/air intercooler together with an electronically regulated over-boost facility.  Being an early car it is also fitted with the desirable Weber-Marelli fuelling and ignition system.  The blue painted cam cover denotes a number of significant changes over the older YBG unit of the Sierra RS Cosworth and power is quoted at 225bhp with 0-60 in 5.9  seconds and a top speed of 140mph. A recent full service and cam-belt change has been carried out by renowned Cosworth Specialists, Harvey Gibbs. The permanent Ferguson four wheel drive system with 34/66% front/rear power split mated to a MT 75 5-speed gearbox is light and direct.

HISTORY FILE
This desirable Big Turbo model was built in August 1992 at the Rheine Assembly Plant in Germany and registered new on the 19th October 1992.  Supplied by Hendy Ford in Southampton a further seven entries in the original service book were carried out by them for maintenance.  Previous MOT certificates and a Concours logbook are also included.  K43MOR was advertised for sale privately in April 2010 for a record price of £35,000 by its devoted owner on Pistonheads and Social Media platforms.  Within days of placing the advert a family holiday to the Canaries was embarked on and during which the car was stolen from the family home.  Soon discovered by the police just 10 miles from the owners house, hidden and ready for disassembly, but thankfully halted due to the quick find.  The vehicle is HPI Clear and was subsequently purchased by Mark Bailey from the world famous Bonkers RS Collection.  A display board when housed in his collection and included with the history file reads; ‘7,632 miles from new, has won every trophy known inc RSOC National Day five times, one of the lowest mileage vehicles left worldwide, this one is thought to be the best in existence’.  Sold off by Mark with all the other Bonkers Ford RS Collection this example has been owned by respected Ford RS collectors since, appreciative of the amazing low mileage condition and early Big Turbo rarity.

All keys and immobilisers along with the original service book and handbooks are supplied.  The grey leather handbook is still in the Ford cardboard box! The original Assurance Certificate is also supplied with the car.