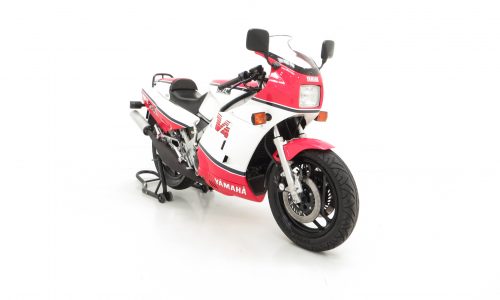 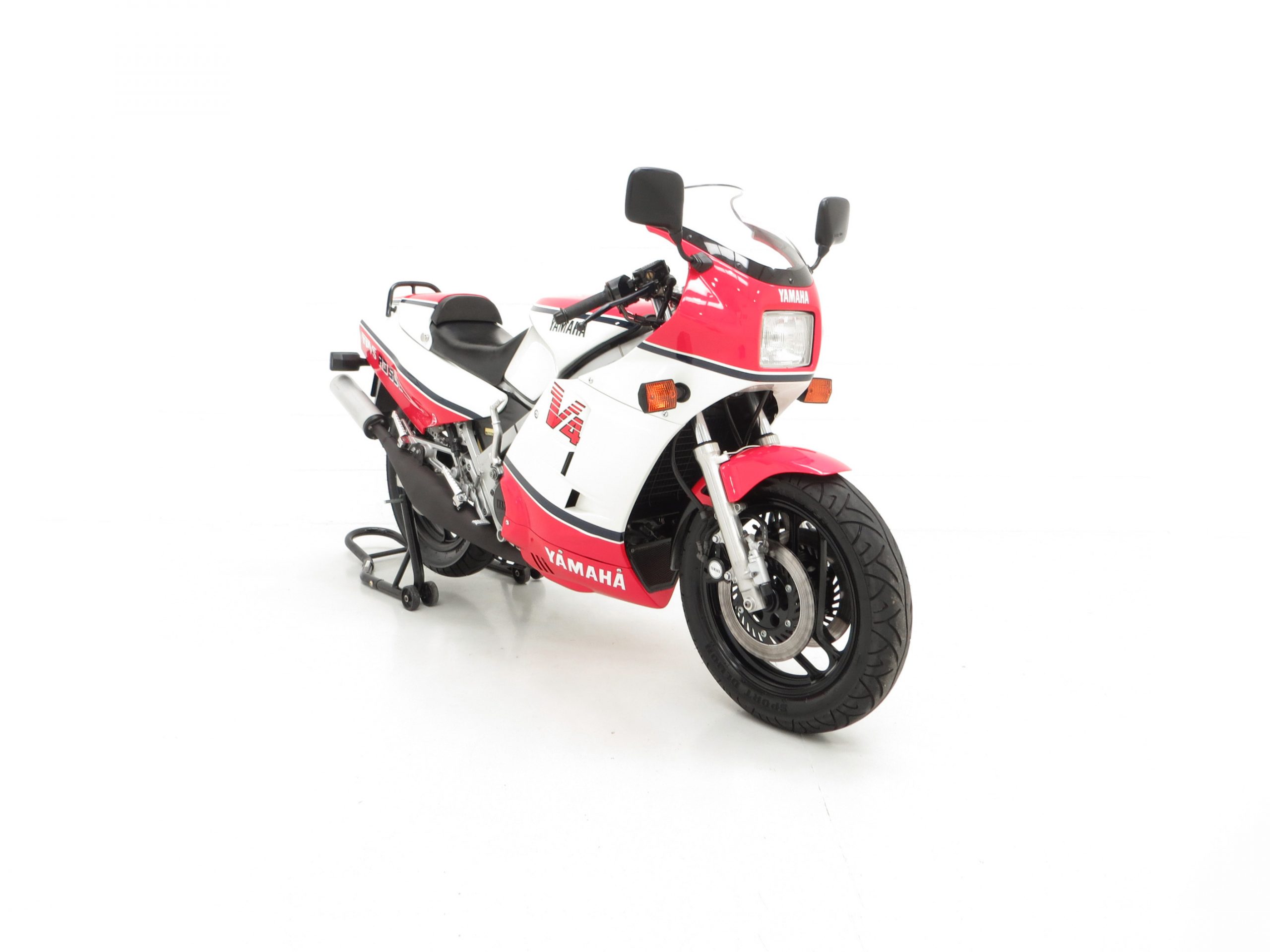 MODEL HISTORY
Much theorising, rumourmongering and eager anticipation preceded the launch of the Yamaha RD500LC. When the factory finally unveiled what was at the time the most powerful 500cc road motorcycle ever built, it was abundantly clear and frankly astounding how similar the design was to their YZR500 race bike that racing legend Kenny Roberts took to six Grand Prix victories in 1983. In the years before the launch of the RD500LC in 1984, Yamaha were acknowledged as the trend setters in the world of high-performance two-stroke machines and the introduction of this iconic machine took this reputation to new heights.

EXTERIOR
Built for just two years from 1984, the RD500LC was available in just two colour schemes which were Stormy Red with either Silky White or Yamaha Black. This outstanding example in Stormy Red /Silky White, (Code GE SW/AJ SMR), looks magnificent having been subject to a very expensive and accurate repaint by the renowned Mark Cordwell in Derby along with correct decals. The original and unrestored frame and ancillaries remain in superb order with the frame number clearly visible and untampered. Genuine factory fitted and damage free YAMAHA IGE-14753 exhausts have been blasted and power coated to ensure longevity. Everything about the bike is correct down to the genuine Yamaha mirrors and Koito headlamp and the original seat and single seat converter with manual below. Purists will delight at seeing the often-missing foam foil heatshield over the exhaust as it passes diagonally underneath the seat and the lower front faring guard grate and an uncut rear guard below the number plate. All switchgear is fully intact with white lettering and all gauges and warning lights operate perfectly. Upon first ignition turn on, the Powervalve operation can be seen and heard and the oil light illuminates and distinguishes, exactly as it should. Without question one of the best RD500LC’s on the planet.

ENGINE & TRANSMISSION
The original engine number and stock frame stampings along with speedometer in MPH confirm this as a matching numbers UK machine. The 500cc 2-stroke vee-four-cylinder engine fitted at the factory is set at 50 degrees in order to make the unit as compact and narrow as possible. Power output of 88hp at 9500rpm achieve a recorded top speed of 148mph and standing ¼ mile in 11.7 seconds (117.7mph), this really was the most powerful 500cc road motorcycle ever built! Since purchasing the bike in 2018, the previous owner commissioned a full engine strip down and rebuild by renowned expert Richard Pell, a retired motorbike racer. No expense was spared and the rebuild extended to the sourcing of genuine Yamaha parts including crank seals, piston rings and head gaskets. Furthermore, a carburettor rebuild was carried out as well as new oil delivery lines and chain. Upon strip down and accessing the engine, Richard noted that everything was original and nobody had opened the unit before and that the bores were in exceptional condition and commensurate with the mileage displayed of 12,079 miles. Photos of the stripped engine are included in the history file and the engine did not require a rebore. This example kicks into life effortlessly and performs wonderfully and the 6-speed transmission with working neutral indicator is perfect in operation. A sound and smell to bring your 1980’s bedroom poster bike to life!

HISTORY FILE
This matching numbers UK Yamaha RD500LC was registered new on the 8th October 1985 by St Neots Motorcycle Company in Cambridgeshire. Remarkably the first keeper owned the bike until 2017 with the prefix C800 MEG. It was then acquired by Fastline Superbikes who registered it in their name. Just two private collectors have owned the bike since including serial bike collector, Dean Marshall. Wanting to own the best, most genuine and correct example possible, Mr Marshall has approached this quest with a no expense spared attitude and by exploiting the highest expertise in the world of two-stroke machines. His knowledge and passion for these bikes is all encompassing and awe-inspiring, and vital was the ability to not only create a show bike but one that could be ridden and enjoyed. In fact, as recently as the 22nd September this year Mr Marshall rode the bike on a 100-mile blast! In addition to the original manual are two sets of Yamaha keys with tags and a history folder containing many invoices and accounts of the bikes history and works undertaken. The pièce de résistance is the registration number B16 YPV now allocated. An iconic model in 2-stroke motorbike history, the rare opportunity to acquire this outstanding Yamaha RD500LC must not be missed.