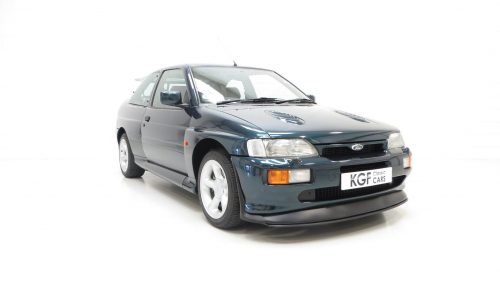 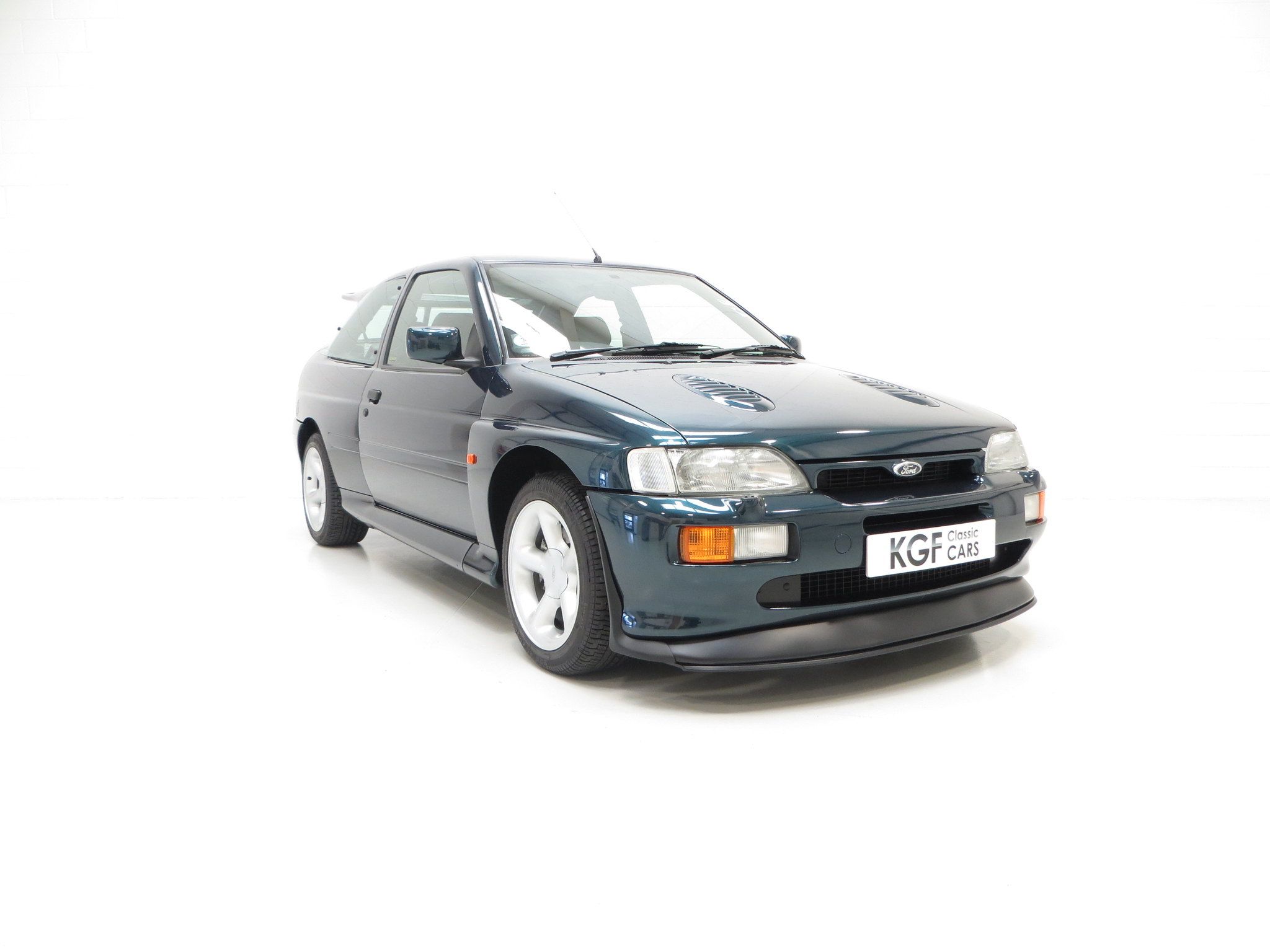 MODEL HISTORY
The Ford Escort RS Cosworth was a sports derivative and rally homologation special of the fifth generation Ford Escort. It was designed to qualify as a Group A car for the World Rally Championship.  It was available as a road car from 1992-96 in limited numbers from Ford’s Specialist Vehicle Engineering, (SVE), group.  It combines the hand-assembled engine expertise of Cosworth and the coach-building crafts of Karmann.  In order to accommodate the larger Cosworth engine and transmission Ford developed the car around the chassis and mechanicals of its predecessor, the Sierra Cosworth.  A very rare car with only 7,145 examples being produced with the first 2,500 units being Big Turbo Homologation cars.   (Source Wikipedia, 1995 Edition One RS Brochure and the RS Owners Club).

EXTERIOR
With 200 hours detail development in Fords own Cologne wind tunnel the rally-bred innovation of this model is instantly recognised.  Finished in the unique Escort Cosworth launch colour of Mallard Green, (Code 4 2), the finish can be described as impeccable.  An invoice in the file for Armourfend paint protection followed by temperature controlled storage and 2,500 careful dry mileage use only guarantees sheer perfection and a factory new appearance. The three-position front adjustable splitter still has the factory chalk marks and the underside is factory correct and spotlessly clean having never been altered from production.   The colour-coded fuel filler cap and large door mirrors of early Big Turbo cars along with every inconceivable detail is correct.  This one owner Escort Cosworth is the Holy Grail.

INTERIOR
The interior of this early Escort RS Cosworth Lux Edition is as new and exactly as Ford intended.  The Recaro seats finished in the Polaris Grey Hex cloth, (Code LW), are divine with a fullness only witnessed on incredibly low mileage examples never exposed to ultraviolet light.  The desirable early leather covered steering wheel with three horn buttons remains fitted.  Removable Ford RS Owners Club stickers are affixed to front screen with this being the 94th car registered.  Being one of the first 2500 cars the pristine boot area still has the water injection kit never plumbed in and unused to comply with homologation. Most were removed by the Ford dealer to avoid customer confusion but the only owner of this car knew the significance and asked the dealer not to remove it.  Seat covers, a supply of genuine Ford paper mats and upmost care help explain why this interior is perfect.

ENGINE & TRANSMISSION
The powerful and well proven Cosworth 2.0 litre 16v turbocharged YBT engine features the larger Garrett T3/T04B turbocharger with a two-stage water/air and air/air intercooler together with an electronically regulated over-boost facility.  Being an early car it is also fitted with the desirable Weber-Marelli fuelling and ignition system.  The blue painted cam cover denotes a number of significant changes over the older YBG unit of the Sierra RS Cosworth and power is quoted at 225bhp with 0-60 in 5.9  seconds and a top speed of 140mph. Religious annual servicing by the supplying Ford main dealer leaves no doubt to the mechanical wellbeing of this cherished car.  The owner even keeping removed spark plugs when new ones were installed.  The permanent Ferguson four wheel drive system with 34/66% front/rear power split mated to a MT 75 5-speed gearbox is light and direct.

WHEELS, TYRES & BRAKES
Genuine Ford RS 8 X 16” five soft-spoke alloy wheels built by Ronal are pristine and still shod in the correct Pirelli P Zero tyres which were specially developed for the Escort RS Cosworth.  Unbelievably the tyres are perfectly preserved thanks to being wrapped and the car being off the ground when stored.  Electrically-controlled ABS anti-lock system with two microprocessors and ventilated front and rear discs offer immense stopping power.

HISTORY FILE
Simply astonishing and unrepeatable.  This desirable Big Turbo model was built in September 1992 at the Rheine Assembly Plant in Germany and registered new on the 1st January 1993.  Supplied by John Grose in Ipswich for £22,402.52 to the only owner, Mr Rick Wildridge who specified the car to be registered with a ‘COS’ suffix private number plate which remains with the car.  Ownership has never passed to any other individual, organisation or collector.  John Grose have annually maintained this car from new with an impressive 24 service entries catalogued over four service books and every invoice accompanied by each Ford Visual Health Check.  Mr Wildridge also insisted that the same trusted John Grose employee, Mr Steve Syrett now the Service Manager, work on the car!  This fanatical approach is echoed in every conceivable way from the climatic storage chamber for the car to the near obsessive collection of Escort Cosworth literature spanning 25 years.  A Classic Companions ‘This is Your Life’ presentation box neatly documents any expenditure including the 16 fuel station visits using only Shell Super Unleaded with accompanying receipts.  A Ford connoisseur will be amazed with all aspects of this example and will no doubt want to claim it to be the very best in the world.

All keys with original supplying dealer key fobs, every tax disc, every MOT and all Ford handbooks are supplied.  KGF Classic Cars are honoured to be associated with this historically significant Ford Escort RS Cosworth.