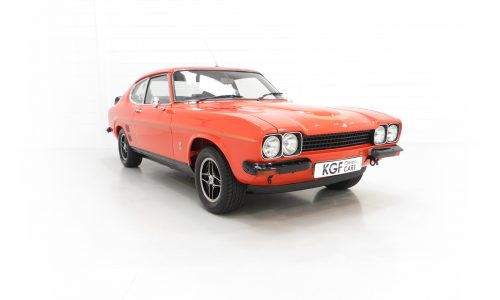 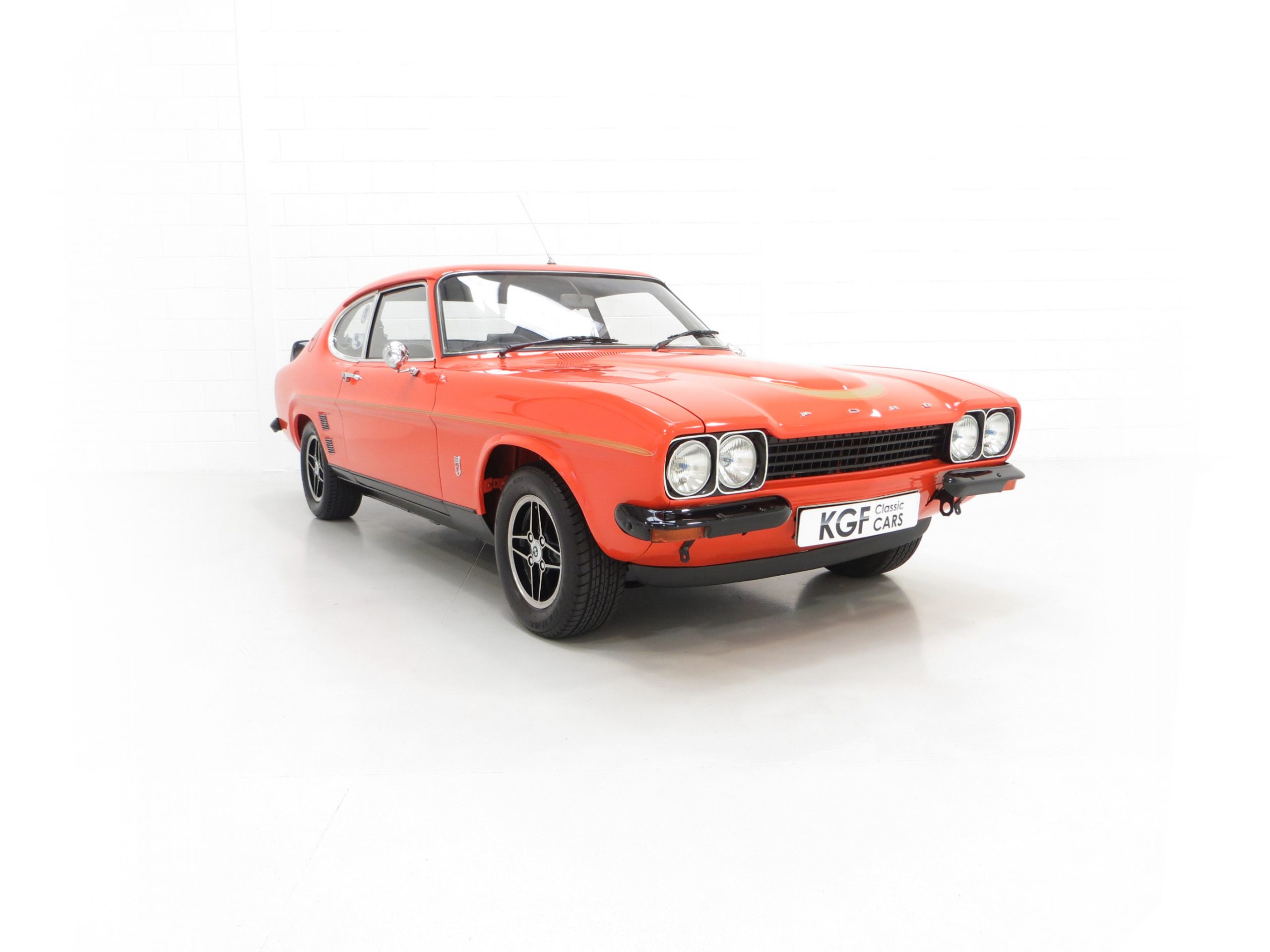 MODEL HISTORY
Just 250 RS3100 Capris were made and at launch it claimed to be the ‘fastest Ford produced in Britain’. Ford needed the RS3100 to remain competitive in the European Touring Car Championship and compete against the BMW 3.0-litre CSL Batmobile. Ford Advanced Vehicle Operations (AVO) was given the go-ahead in September 1973 to build the cars at Halewood. Racing regulations required 1000 units to be made for homologation but the launch in November 1973 coincided with the oil crisis and a steep rise in fuel prices combined with a high showroom price of £2,193.31 and the imminent arrival of the Mk2 Capri all acting as further deterrents to sales. Despite falling short of the 1000 units, racing authorities granted Group 2 homologation and of the 250 units made 50 units were exported to Australia and 23 allocated to Ford Area Sales Managers. (Source: Factory Orginal Ford Capri Mk1 by James Taylor, The AVO Owners Club & The RS Owners Club).

EXTERIOR
This iconic Ford Capri RS3100 is finished in striking Sebring Red, (Code N), which looks incredible at any angle. With a huge Ducktail rear spoiler, full width chin spoiler and flared front wings, seventies boy-racer machismo is found in abundance and is the envy of all other Capri owners. Superbly presented and thoroughly enjoyed by the current long-term owner since commissioning C.B. Restorations in 2011, this car now has minor insignificant signs of use and can still be showcased, driven and commended in absolutely all areas. Original RS3100 features are present to include the correct German specification rear bumper with two number plates lights retaining the bright metal casings, black painted boot lid to match the boot spoiler and all and decals. An RS boot badge in lieu of the GT item and gold decals on the filler cap are at the owners preference and all glass is number plate etched. The wheel arches are spotlessly clean and the underside structurally perfect. One of a handful of survivors to be used and enjoyed.

INTERIOR
The standard Black PVC, (Code AA), individually contoured reclining front bucket seats are incredibly still original fitment and present very well with just a few loose stiches. The Black headlining unique to the RS3100 Capri, door cards and padded dash top are in remarkable condition with very few imperfections. The original black carpeting has some minor wear along with the non-protruding push button switches for the lights and wipers. The Matt Black vinyl dash houses the comprehensive instrumentation with all the distinctive red needle gauges operational and the heater fan works on both speed settings. A modern Bluetooth stereo with parcel mounted rear speakers from a bygone era are fitted. Functional, simple and very pleasing.

ENGINE & TRANSMISSION
AVO decided to use the Essex V6 engine as a base for the car with an increased capacity from 3.0 litres to 3.1. Racing versions were increased to as much as 3412cc and when mated to a Cosworth 24v head were capable of a reliable 415bhp! In this guise a maximum output of 148bhp is quoted to achieve a top speed of 125mph and 0-60 in 7.6 seconds. Returned to standard specification by Specialist Engines Ltd in 2016 after modifications were carried out to the original engine by Rick Wood Racing Engines in 2000, the car performs faultlessly. The serial number of the engine matches that of the car. The standard Weber 38DGAS carburettor and blue rocker covers are the more obvious standard features. Less obvious is the original body plate with the unique words ‘SPA SPECIAL’ only found on the RS3100 and factory original chassis plate remaining attached to the front inner wings with reinforcing plates. A replacement non-standard exhaust system sounds incredible. The standard four-speed manual gearbox was rebuilt by Western Transmissions in 2016 and offers reassuring changes.

WHEELS, TYRES & BRAKES
The four-spoke alloy wheels are the same as those used on the earlier Capri RS2600 with a 13-inch diameter and 6 inch wide rims, all in very good condition shod in branded tyres with ample tread. Importantly the wheels have Capri written in the back. The servo assisted brakes were also carried over from the RS2600 with ventilated front discs on special front hubs and 9 inch rear drums now uprated to a dual-line system for safety.

HISTORY FILE
Three box files of history await the next lucky custodian tracking everything from star-studded film appearances and documentaries such as The Bromley Boys and Car SOS with Tim Shaw and Fuzz Townshend to magazine features and buyers guides. Putting aside the glamour and glitz and importantly for a collector and enthusiast, this car is registered with the RS Owners Club and known by Len Peirce, the Capri RS Registrar. The car has the correct prefix BBECND and was manufactured at Halewood Great Britain in November 1973. It is documented in the RS Owners Club publication, Rallye News written by Len Peirce, that only 53 Sebring Red cars were sold in the UK when new and now fewer than 107 remain across all colour variants of which just 72 are complete. Enjoyed extensively by the current long-term custodian this car has attended various events such as SPA-Classic, Goodwood, Castle Combe and was an official display vehicle at the NEC Classic Motor Show. Photos, invoices and bundles of documentation will take hours to peruse but will all help to reassure the next owner this car is the real deal and definitely the car you always promised yourself.