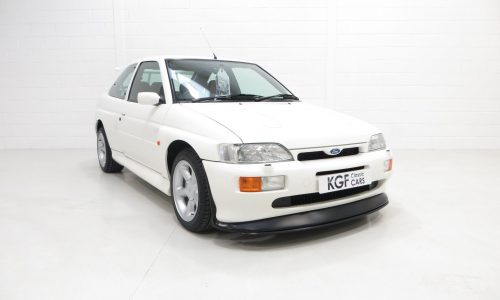 EXTERIOR
The breath-taking exterior of this Escort RS Cosworth is nothing short of magnificent.  Finished in solid Diamond White, (Code B2), the paintwork boasts an impeccable shine from the flawless factory finish.  All exterior trim, lights, badges and rubbers are perfect.  All correct Ford window stickers remain intact including the Ford Security System and Dealer supplier rear window sticker.  A private number plate included with ‘FMC’ suffix pays homage to the press cars used by the Ford Motor Company when new.  A beautifully detailed underside featuring a standard exhaust is worthy of the demanding show scene.  Incredibly original and unmolested and cossetted underneath an expensive soft fibre car cover included in the sale, this is a true champion collectors car.

INTERIOR
The interior of this Escort Cosworth is wonderfully original and showroom fresh.  The Recaro seats are finished in the Polaris Grey Hex cloth, (Code LW), and are immaculately clean and free from wear.  The seat bases and bolsters remain tight and have retained all shape, and even the delicate piping to the seats have avoided the wear commonly suffered in other examples.  The cut-pile carpets are perfect and untouched thanks to genuine Ford carpet mats.  The standard Ford radio/cassette, Model 2006 RDS sound system remains as Ford intended and the optional CD player model 2040 remains fitted.  The boot area is pristine and houses the factory fitted space-saver spare wheel and correct jack.  An impeccable RS interior representative of a new vehicle handover in March 1996.

ENGINE & TRANSMISSION
The original RS Cosworth powerplant warrants little introduction.  Fitted with the factory standard Generation Two Ford EEC IV electronic engine management system and Garrett AiResearch T25 turbocharger and intercooler, the motorsport pedigree of this car is obvious.  With an impressive output of 217HP, the car accelerates rapidly through 0-60 in 5.7 seconds and reaches a top speed of 144mph.  The pristine engine bay is exactly as Ford intended and displays factory seam welds and weld dots to the wings along with original plates, stickers and stampings.  An ultra-rare and sought after white Motorcraft battery and Motorcraft hoses, ancillaries and filters will pass strict Ford aficionado scrutiny.  The permanent Ferguson four wheel drive system with 34/66% front/rear power split mated to a MT 75 5-speed gearbox is a delight.

HISTORY FILE
Built in November 1995 at the Rheine Assembly Plant in Germany, this factory specified Luxury model was registered new to its first owner on the 14th March 1996 by Ford RS Agent Whites of Taunton.  The incredible low mileage of 15,381 miles is verified in the comprehensive and beautifully presented history file.  The original Ford service booklet contains stamped entries from Ford Main Dealers and marque specialists, including renowned and respected Graham Goode Motors Ltd of Leicester.  Furthermore, two huge and impeccably ordered history folders track the vehicle maintenance from new and documents no less than four cambelt changes, the most recent being January 2017 along with an engine service using genuine Ford components.  Every MOT certificate acquired throughout the cars lifetime is present to absolutely verify the mileage.  Completing the superb history is the original Ford wallet containing all handbooks and guides, spare keys including red master key and even an irreplaceable RS rear view mirror hung specification placard.  An extraordinary example and worthy of the best Ford collections.