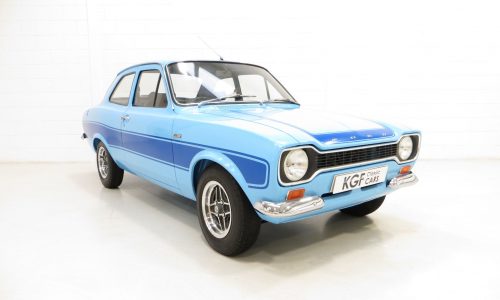 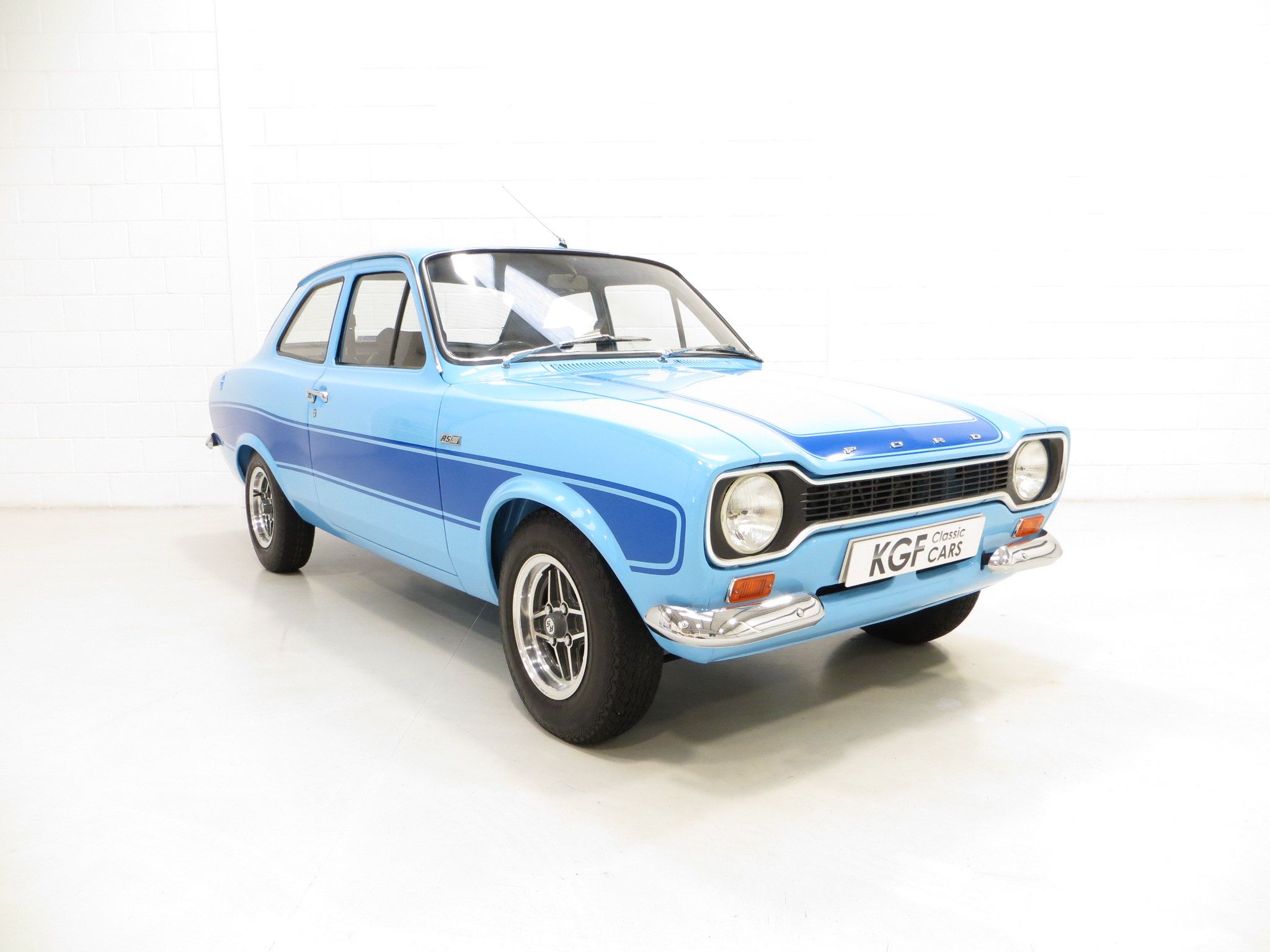 EXTERIOR
Finished in classic RS Olympic Blue, (Code E), the paint finish to this genuine RS2000 is truly outstanding from every conceivable aspect.  The fully detailed and spotless underside displays the correct Type-49 shell strengthening components as well as slant rear dampers, a feature unique to only the very early pre November 1973 cars prior to use of the Mk2 floorpan.  Amazing detailing throughout and painstaking attention to accuracy sets this car above even the best A1 examples, and keen RS experts will find AVO workmanship laid bare for all to see, including the cut outs to the bonnet strengthening brace and bulkhead, required to accommodate the longer and higher positioned RS2000 Pinto engine.  All trim sections, Cibie/Fomoco lenses, Triplex toughened glass and the distinctive 12-piece wide decal kit remain in pristine order, and even the ultra-rare and hugely sought-after genuine RS wiper blade deflector remains fitted!  A long-standing feature on the classic Ford scene and famous within the RS Owners Club, this multi-awarding winning example is near impossible to fault.

INTERIOR
True to a Ford RS2000 interior with incredible attention to detail.  The black brushed nylon RS sports seats, (Code A1), with optional headrests match a spotless loop pile carpet throughout and unmarked door cards.   The rare Kienzle clock housed within the optional RS centre console is operative and joins the fitted Ford MW/LW radio which is not connected.  All the other sports instrumentation functions providing at a glance concise information.  The boot area continues the showroom experience with a genuine blue Ford jack and brace neatly wrapped in the hessian bag alongside the correct grey primer fuel tank.  One for the RS connoisseur wanting to enjoy this motoring legend at its best.

ENGINE & TRANSMISSION
Appreciation of this engine bay leaves no wonder why many awards and trophies have been earnt over approximately 20 years on the Ford RS show circuit.  The 2.0 Ford ‘Pinto’ unit develops 100bhp and 0-60mph in 9.0 seconds with a top speed of 108mph.  The original Ford identity plate and AVO plate remain fitted and clearly legible to affirm the cars indisputable genuine credentials.  Ford supplied engine stickers are a far superior fitment to aftermarket copies found on most examples, and attention to details even extend to the oil filler cap with correct 71HF part number!  The Type E single selector rail shift four speed synchromesh gearbox offers short, positive snappy gear changes.

HISTORY FILE
Built at Fords Advanced Vehicle Operations factory in Aveley in September 1973 prior to UK launch the following month, this vehicle is one of 3,759 genuine AVO RS2000’s built for the UK market of which only a fraction are now recorded on the AVO register.  Registered new on the 1st December 1973, the first owner was a Mr Bryan Jones.  Many previous owners have been traced and the huge history file contains records and letters between owners.  Paying the sum of £1,499 less £700 part exchange allowance for his 1972 Escort Mexico, Mr Philip Pring purchased the car in September 1976.  Dated some twenty years later, a letter from him is in the history file after the owner in 1996 traced him to find out more about the car!  The history file is simply colossal and perusal of such would take hours.  Regular valuations from the Ford AVO Owners Club date from 2001 to the latest in July 2016 whereby Club Valuer/Model Registrar, Eddie Pepper, valued the car at £50,000.

Masses of neatly filed invoices date back to the 1970’s as well as documentation relating to regular successful entry and judging at RS Owners Club Concours events.  Owned twice by Charlie Chisholm, Owner of CWC Restorations, he restored the car between 1998 and 2003 and such was his love for the car, he bought it back in 2006!  Widely regarded in the AVO Owners Club as one of the three best Mk1 RS2000’s in the country, as stated on an AVO Owners Club valuation certificate, this car is incredibly special.