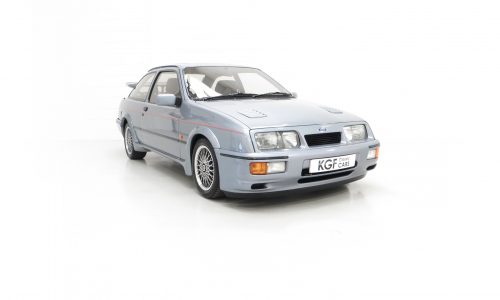 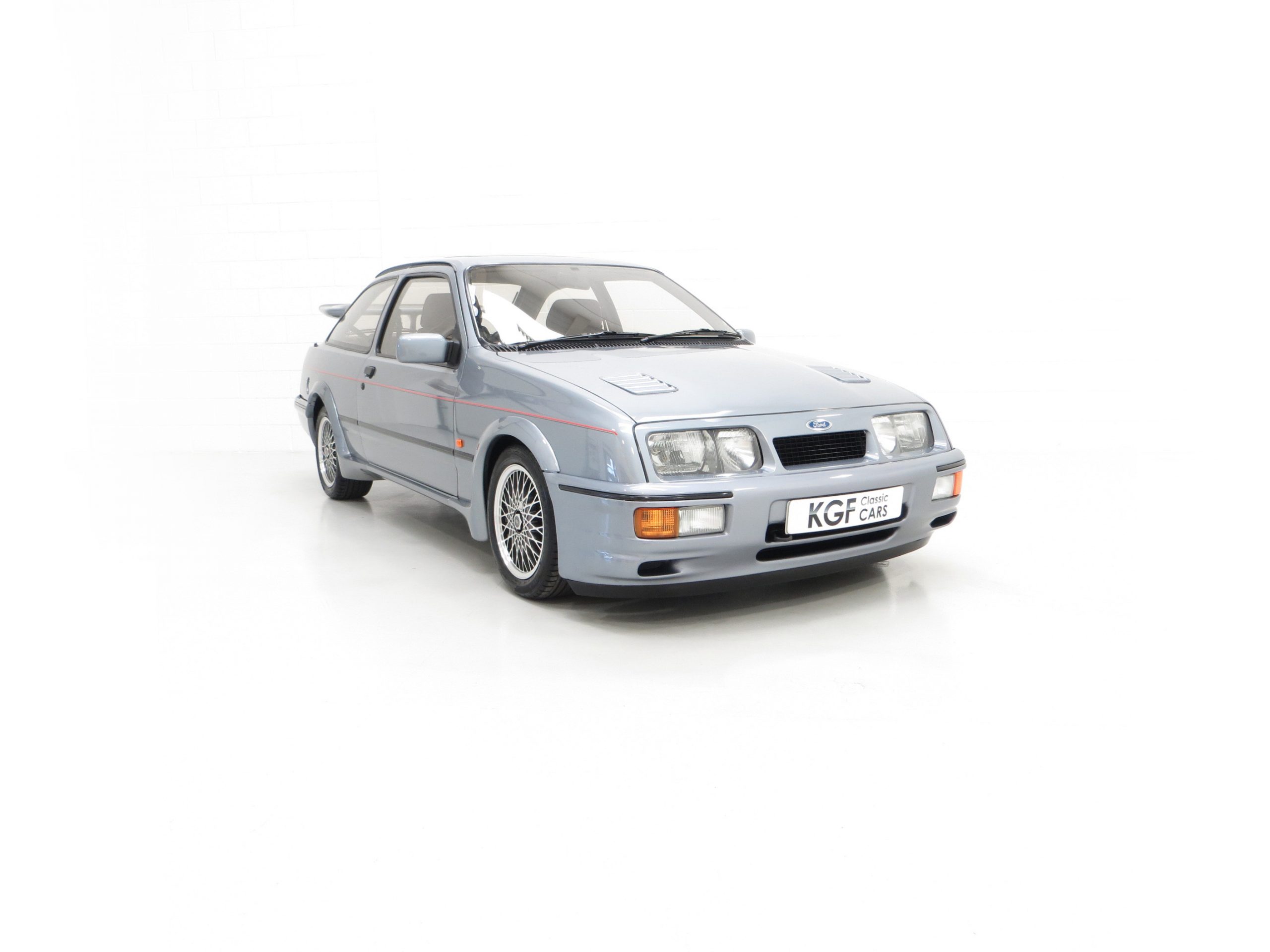 FOR SALE
An astonishing Ford Sierra RS Cosworth with traceable history and 12,993 miles.

MODEL HISTORY
The Sierra RS Cosworth project was defined in the spring of 1983 by the then recently appointed head of Ford Motorsport in Europe. It was established that at the time, Ford was no longer competitive in this area. After receiving full support from Ford Public Relations, the project was underway with the Sierra chosen as the basis for the task ahead. Ford Motorsport in Europe approached the automotive company, Cosworth, who answered positively, but put up two conditions: The street version of the car had to produce no less than 204 HP, and Ford had to accept no less than 15,000 engines. The project would only need about 5,000 engines, but Ford nevertheless accepted the conditions. The extra 10,000 engines would later become one of the reasons Ford also chose to develop a four door, second generation Sierra RS Cosworth. Few cars have ever been greeted with such enthusiasm as the original Sierra RS Cosworth.

EXTERIOR
The iconic styling of the Sierra RS Cosworth is instantly recognisable and a 1980’s legend. Finished in optional Ford Moonstone Blue, (Code K6), the factory paintwork is just perfect and displays the correct orange peel finish throughout. All panels are original with discreet date stampings and seam welds. A tiny rub to the rear bumper, minor chips at the rear of the side skirts are honest signs of minimal use. The glass is correctly dated Securit fitment with delamination to the front original Glacetex screen and all rubbers display fullness with no distortion. The underside to this low mileage car will be a benchmark for those seeking Ford factory correctness with all PDI coloured dabs, Motocraft stickers and alignment paint dashes visible. Ford main dealer Brundall Motor Company number plates remain fitted as supplied by them when the car was eight months old along with a red pinstripe. A truly sensational car commensurate with the incredible 12,993 miles and true to the original Ford SVE Department design.

INTERIOR
The interior of this RS Cosworth is truly outstanding and exactly as Ford intended. Finished in Ford Roma and Cashmere Grey Velour, (Code S2), the Recaro seats, door cards and headlining are spotless, there is no lifting of the material to the door handles or sagging of the headlining. The drivers seat retains the correct shape with only very light creasing to the driver’s seat base. The carpets are plump having been protected by tailored Cosworth velour mats. Remarkable is the fact that the dash has not one hairline crack, a problem suffered by most and the leather steering wheel and gear knob have visible veins. The standard ECU2 electronic sound system with power amplifier is fully operational and the LCD display to warn of bulb failure and open doors operates perfectly. The boot insulation panel designed to raise the boot floor to incorporate the larger spare wheel is present and in perfect condition. A classic and correct Ford RS interior and virtually impossible to fault.

ENGINE & TRANSMISSION
Fitted with the standard 1993cc Dual Over Head Cam (DOHC) engine with the Garrett AiResearch T3 turbocharger and intercooler, the racing pedigree of this car is truly evident with performance figures quoted of 204bhp, 149mph top speed and 0-60 in just 6.2 seconds. The engine bay will please originality seekers with thankfully no bracket, component, nut or bolt has been zinc plated to create an over-restored finish. Factory panel stampings on the inner wings, bonnet underside and slam panel are all visible. All stickers and plates remain intact and are not reproduction items. The tough T5 manual transmission is direct and precise and perfectly weighted.

WHEELS, TYRES & BRAKES
The standard Rial 15 X 7J Sierra Cosworth alloy wheels and centre caps are pristine finished in Nimbus Grey with diamond cut facings. The Ford logo to the centre cap is still diamond cut having not been refurbished. Matching Dunlop Sport tyres in the correct size of 205/50 R15 have masses of tread remaining and the spare wheel is wrapped in the original Dunlop SP Sport D40 tyre with tread depth indicator, a feature deleted on the Sapphire Cosworth. Hydraulically boosted anti-lock brakes with 28.3cm ventilated discs up front and 27.3cm discs at the rear bring the car to a sure halt.

HISTORY FILE
Manufactured at the Ford Genk plant in December 1986 and supplied new on the 5th January 1987 by Ford RS Dealer, J.E Coulter Ltd, this example has covered a genuine and warranted 12,993 miles from new in the hands of just three owners. The first, Mr Carl Abbott for eight months before selling to Ford main dealer, Brundall Motor Company in Norwich. The dealer sold the car in November 1987 to Mr Allan Beesley with 6,172 miles. Mr Beesley paid £307.05 for the three year Ford Extra Cover and remained the second custodian for 31 years until June 2018. A serial Ford collector, Mr Beesly used the car sparingly joining amongst other cars a Lotus Cortina he owned from new and a Mk1 Escort Mexico. On the first MOT in January 1990 the car had covered 7,805 miles and had already been serviced by Brundall Motor Company seven times such was his fastidious nature! Realising the historical importance of the car it was treated to a full service by the Stratton Motor Company in May 1990 costing £490.73 and placed in storage with his other collectable cars. Correspondence between the Ford Motor Company in January 1994 on a Safety Recall regarding chafing of the wiring loom against the fuel inlet connector security clip, Mr Beesley writes, ‘the car is still owned by me and is currently laid up with only 8,000 miles’ and that he ‘will be unable to effect the safety recall’. Ford main dealer invoices during the cars storage reveals periodic starting and warming up and in 2005 the decision was made to fully recommission the car for light use whereby amongst other perishable items, the exhaust and original tyres were replaced.

In 2018 a five page Valuation Report by Dunn Shaw Insurance Assessors and Consulting Engineers on instruction of the third owner, Nigel Cope summarises; ‘To find another example this original and low mileage would be difficult if not impossible’ and ‘I would place a valuation of the vehicle of £67,500’. Mr Cope made contact with KGF Classic Cars to seek out the next appreciative custodian.

The Ford blue leather wallet contains all handbooks, guides and dealership literature, and the original stamped service book. All keys are present including a working torch key! It really does not get much better than this.