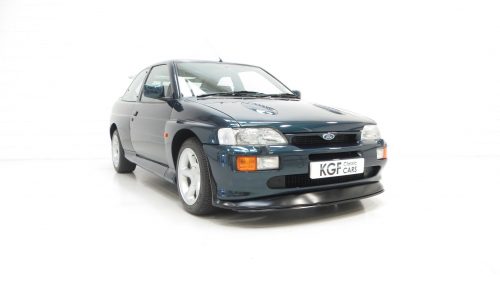 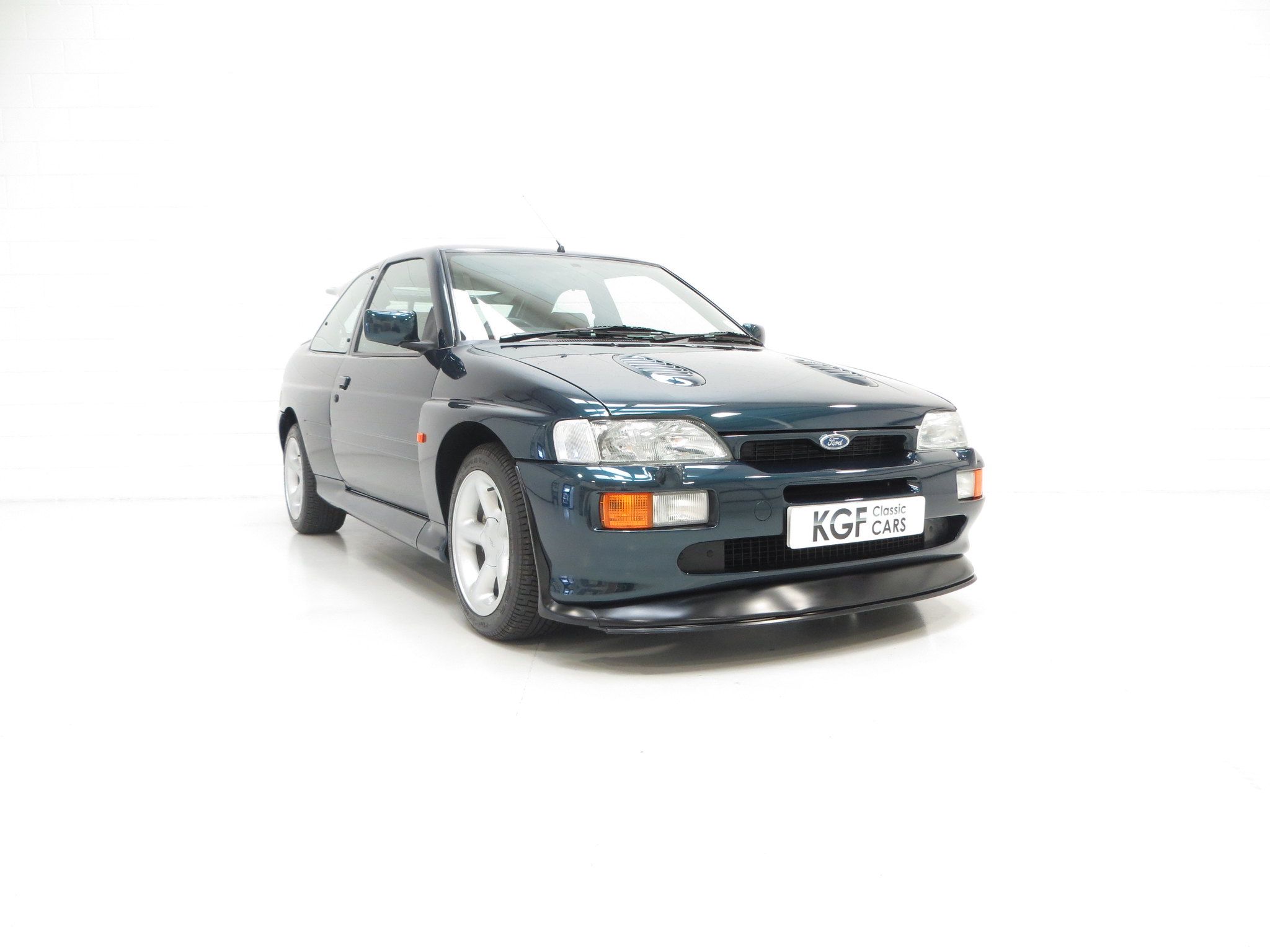 MODEL HISTORY
The Ford Escort RS Cosworth was a sports derivative and rally homologation special of the fifth generation Ford Escort. It was designed to qualify as a Group A car for the World Rally Championship.  It was available as a road car from 1992-96 in limited numbers from Ford’s Specialist Vehicle Engineering, (SVE), group.  It combines the hand-assembled engine expertise of Cosworth and the coach-building crafts of Karmann.  In order to accommodate the larger Cosworth engine and transmission Ford developed the car around the chassis and mechanicals of its predecessor, the Sierra Cosworth.  A very rare car with only 7,145 examples being produced with the first 2,500 units being Big Turbo Homologation cars such as this one.   (Source Wikipedia, 1995 Edition One RS Brochure and the RS Owners Club).

EXTERIOR
Specified in the Escort Cosworth launch colour of Mallard Green, (Code 4 2), the finish is perfect.  A flawless gloss shine will amaze onlookers with every factory standard component spotlessly clean.  Exhibitionists will be thrilled at the detailed underside where every clip, nut and bolt sparkles and nothing has been altered from production.  The colour-coded fuel filler cap and large door mirrors of early Big Turbo cars along with every inconceivable detail is correct.  Supplying dealer number plates and rear window sticker remain attached.  This low mileage Escort Cosworth is pure grade one collector quality.

INTERIOR
The interior of this desirable Escort RS Cosworth Luxury Edition is pristine and preserved exactly as Ford intended.  The Recaro seats finished in Raven Leather are unmarked and in a condition only witnessed on very low mileage examples.  A Ford immobiliser has been fitted from new and all gauges and dials function correctly.  A new car experience is impossible to recreate but this example really is very close in every respect.  Amazing.

ENGINE & TRANSMISSION
Lifting the bonnet will delight perfectionists and scrutineers who will discover a clean factory new spectacle.  The powerful and well proven Cosworth 2.0 litre 16v turbocharged YBT engine features the larger Garrett T3/T04B turbocharger with a two-stage water/air and air/air intercooler together with an electronically regulated over-boost facility.  Being an earlycar it is also fitted with the desirable Weber-Marelli fuelling and ignition system.  The blue painted cam cover denotes a number of significant changes over the older YBG unit of the Sierra RS Cosworth and power is quoted at 225bhp with 0-60 in 5.9 seconds and a top speed of 140mph. The permanent Ferguson four wheel drive system with 34/66% front/rear power split mated to a MT 75 5-speed gearbox is light and direct.

HISTORY FILE
This desirable Big Turbo Ford Escort RS Cosworth was built in January 1994 at the Rheine Assembly Plant in Germany and registered new on the 25th April 1994.  Supplied by Ford Main Dealer, Rates of Grays to Doctor Peter Gill, this vehicle has only had two former keepers.  The second owner, Martin Greene, purchased the car through Ford Main dealers, Bristol Street of Cheltenham Ltd for £21,819 as the purchase invoice reveals.  Now forming part of the Anthony Manning Ford Collection for five years this example has led a very privilege existence with professional care, expert storage and in the hands of a passionate individual with unrivalled knowledge on the Ford marque.  Owning two other sub 10,000 mile examples the difficult decision to part with this car was made.  A warranted mileage of 25,414 is verified with invoices and MOT certificates.  All keys, including the red master with original supplying dealer key fobs are present.  All Ford handbooks are supplied within the blue A5 folder.  KGF Classic Cars are proud to be associated with this spectacular example and seek an appreciative custodian wanting an immaculateness rarely found.