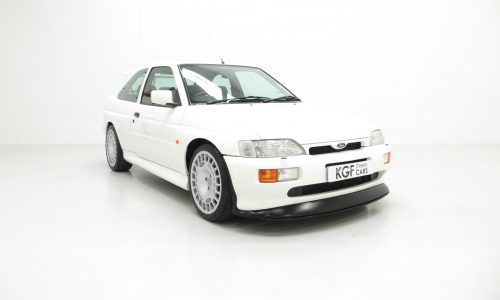 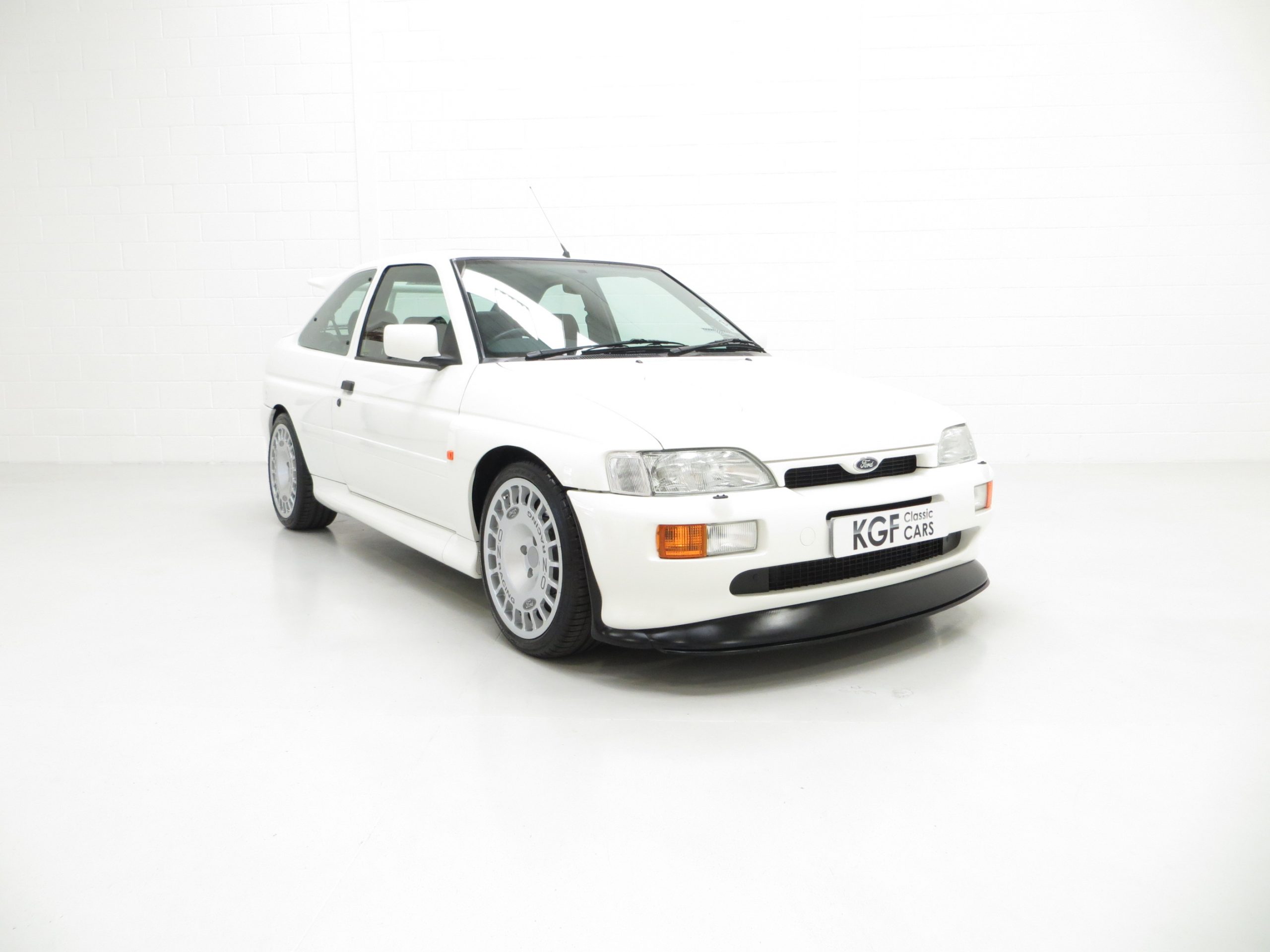 MODEL HISTORY
The Ford Escort RS Cosworth was a sports derivative and rally homologation special of the fifth generation Ford Escort. It was designed to qualify as a Group A car for the World Rally Championship. It was available as a road car from 1992-96 in limited numbers from Ford’s Specialist Vehicle Engineering, (SVE), team. It combines the hand-assembled engine expertise of Cosworth and the coach-building crafts of Karmann. In order to accommodate the larger Cosworth engine and transmission Ford developed the car around the chassis and mechanicals of its predecessor, the Sierra Cosworth. A very rare car with only 7,145 examples being produced and this one of the early 2,500 Big Turbo examples built for homologation. (Source Wikipedia, 1995 Edition One RS Brochure and the RS Owners Club).

EXTERIOR
The striking exterior of this Escort RS Cosworth is nothing short of stunning. Finished in iconic Diamond White, (code B2), the paintwork boasts a professional detailed shine from the smooth polished exterior. Early homologation clues such as the exposed petrol cap remain and larger door mirrors. All exterior trim is in excellent order including the lights, badges and rubbers. The black lower splitter has a few tiny marks and the supplying dealer number plates and rear window sticker are still fitted. One for the Blue Oval fanatic.

INTERIOR
The interior of this Escort Cosworth is a very special place to be. The Recaro seats are finished in optional Dark Grey Leather with virtually no visual imperfections. The cut-pile carpets are perfect and still protected by genuine Ford rubber mats. The comprehensive electro-luminescent instrument panel is all functional. The vehicle is fitted with the optional and very rare air conditioning and Ford 2040 CD player so with the Luxury package, represents full specification. A discreet WRC 12 position boost control switch and Clifford Concept 650 alarm is fitted. The boot area is pristine and houses the factory fitted space-saver spare wheel and correct jack.

HISTORY FILE
Built at the Rheine Assembly Plant in Germany and registered new on the 8th December 1992 by Ford RS Dealer, Grays of Guilford, making this model one of the highly sought-after 2,500 large turbo homologation specials. The supplying dealer wrote to the first owner, Mr Christopher Pegg, confirming his request to have the car delivered to his home address prior to registration with the omission of window etching, fitting of front spoiler, fitting of number plates and to dewax only, not valet the car. Mr Pegg cossetted his pride and joy covering just 2,469 miles before selling the car to Kevin Rogers after 10 years in August 2002. Mr Rogers worked closely with Mark Burley, the owner of Grove Garage who confirms in a letter dated 7th March 2016 that he ‘personally serviced the car and also completed the power upgrade conversion, Ahmed Bayjoo spent several days mapping the car on the road and it was fitted with one of our first prototype rear beam setups which to this day are still manufactured and sold.’

All dealer literature, handbooks and spare keys are included with invoices neatly filed in an A4 folder. MOT certificates chronically filed and tax discs are included. The vehicle was sold to the current fourth owner Mr Simpson in April 2017 and a used vehicle invoice reveals a price paid of £55,800. This very special car with historical importance.