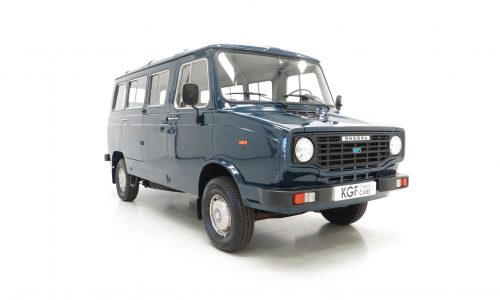 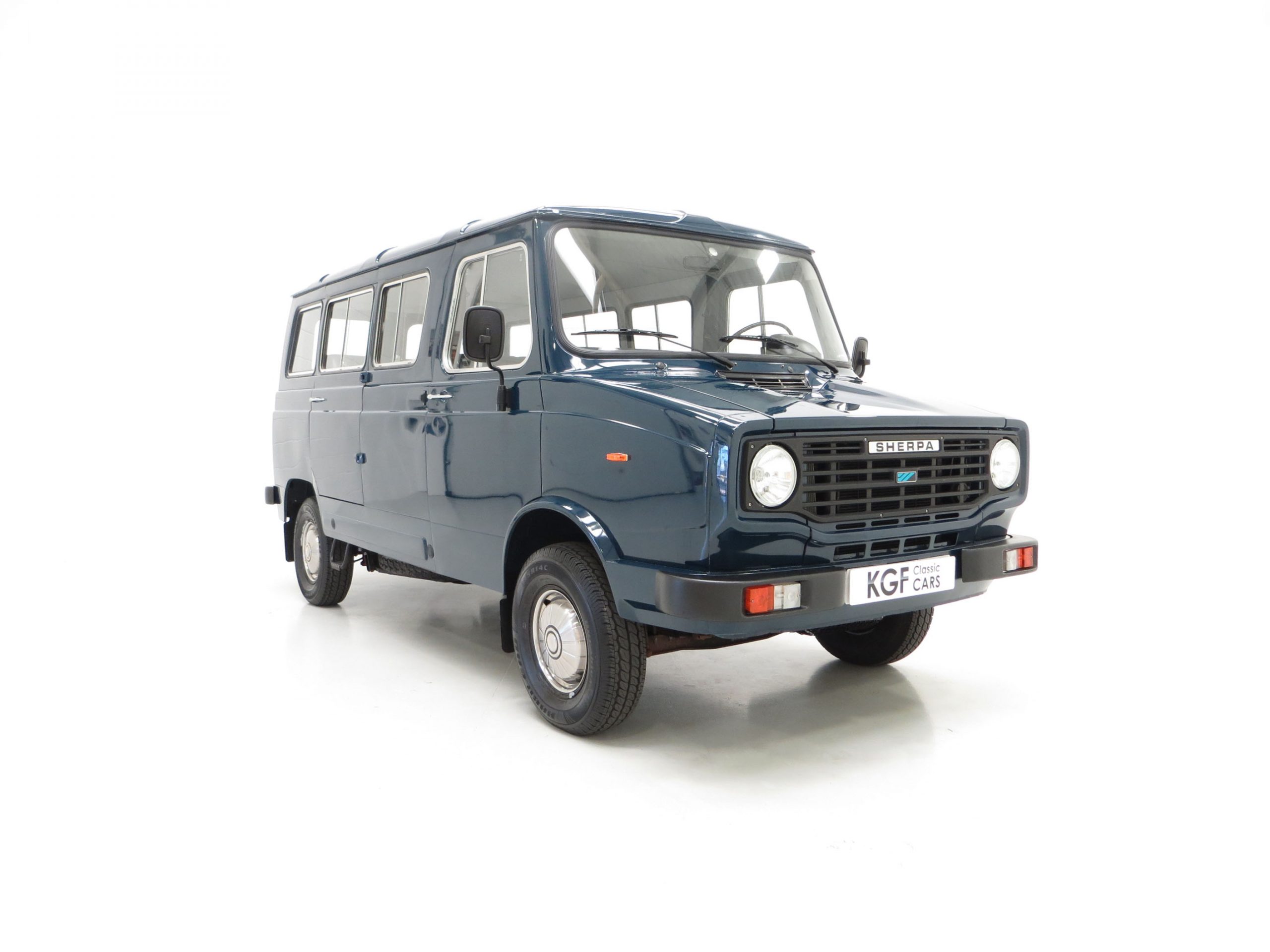 EXTERIOR
This iconic Leyland Sherpa 250 Minibus is a delivery mileage vehicle preserved in totally original condition. Factory-built, this Minibus has covered a genuine 87 miles from new and is finished in factory optional single colour gloss paint in Navy-Blue, (Code JAL). The paintwork is incredible and has been preserved thanks to dry indoor storage away from weather conditions and damaging UV light. Most examples began to rust and had acquired a plethora of bodywork damage within their first year, yet this example boasts perfectly straight panels and no rust whatsoever. Further factory originality is seen in the panel seams, spot welds and genuine ‘Leyland standard’ paint with the occasional run! Close scrutiny reveals nothing more than a small ding to the driver’s door and one to the nearside rear panel. A repair to the drivers step due to jacking error has been professionally carried out. The underside is equally as breath-taking. Thin poorly applied factory underseal remains with areas missed due to poor quality control and full inspection of the box sections and structure will amaze. There are coloured factory paint dabs, PDI markings and even a paper parts label still attached to one rear leaf spring! This is an astonishing vehicle.

INTERIOR
A true time warp interior even down to the nostalgia evoking British Leyland smell! The nine forward facing fully trimmed seats in black vinyl, (Code PMA), are as new having been subjected to just 87 miles of usage, the only imperfection being a small nick to the rear bench seat corner virtually hidden which probably occurred when assembled. The headlining is spotlessly clean and in perfect condition, as are the PVC padded door panels and full-length rubber floor mat. The wood veneer fascia and all switchgear are immaculately preserved. All equipment, interior lamps and dashboard lights and gauges operate. This untouched example boasts further original features such as almost unmarked wheel arch tubs, cab steps with factory information plates and even the original glue to the floor covering which has never been lifted. Tools and warning triangle are present and unused. It is miraculous to find such an amazing unrestored Sherpa interior whereby no amount of money could ever recreate the originality on display here.

ENGINE & TRANSMISSION
Factory fitted with the dieselised version of the BMC B-Series engine, this simple 4-cylinder 1798cc unit develops a wheezy 52bhp and 107Nm of torque. The engine cranks into life after preheat and idles perfectly. The unit pulls strongly and cleanly in all gears and the traditional diesel clatter is simply delightful! The spotless engine bay is untouched even down to the original sound deadening fully intact to the bonnet underside. The inner wings, bulkhead and slam panel are immaculate and factory plates, stickers and stampings remain untouched. Even the mesh sump guard has not been lost or damaged. The four speed all-synchromesh gearbox is surprisingly easy to use and offers crisp and sturdy changes.

WHEELS, TYRES & BRAKES
The steel wheels wear full cover stainless hub caps in lieu of chrome centre caps and brand-new commercial rated 195 R14C tyres were fitted in 2016 to replace the originals. An unused spare wheel and factory tyre remains in the underhung cradle. Divided hydraulic servo-assisted brakes with 10.87in front discs and 9in rear drums are standard fitment and all braking ancillaries such as the zinc plated front calipers look almost new!

HISTORY FILE
Unique vehicles such as this Leyland Sherpa 250 Minibus often have, as in this case too, an interesting back story. A letter in the history file dated 23rd November 2018 from Nigel Harrison of the Morris Commercial Club confirms that following a vehicle inspection, this Minibus was manufactured in the UK and exported when new to Portugal. Portuguese registration took place on 25th March 1982 using plate number IZ-00-41. A copy of the Passport to Service details the Minibus being first registered to Josefina Rodrigues Viegas Perfinas. It is reported in a magazine article in UK publication, Classic Van and Pick up, that tragic bizarre events befell the first owner following the loss of life to him and his wife prior to collection. Complex Portuguese inheritance laws meant that property of a deceased went to the state after a number of years unless claimed beforehand. A system that allowed claims to be made was in place, however it was a convoluted affair that could, and very often did, take years to resolve. In the meantime the Dealer was under an obligation to keep the vehicle in its current condition unused until the issue was resolved, which did indeed take many years. In fact this Sherpa remained with the dealer in secure dry storage for decades. In 2016 Mr Alan Jeynes of Redcar, Cleveland, saw an advert for the vehicle placed by a classic vehicle Dealer in Santa-Maria de Lamas, he promptly purchased the Minibus blind and arranged transportation 1,500 miles to his home! Full UK registration and recommissioning has taken place and in 2018 the second UK owner purchased the vehicle to join his eclectic collection of classic cars due to Alans poor health. The magazine feature written by Brian Culpan makes the front cover and is titled ‘A most amazing minibus’. He concludes after a three page glowing feature; ‘Having spent several hours closely inspecting this Sherpa, I remain amazed and almost speechless at its original condition’. All handbooks and guides remain in the Leyland document wallet and there is a separate file of Portuguese documentation, the magazine feature and an original ‘Sherpa, Loads Better’ sales brochure. An unmissable opportunity and true museum artifact in every respect.