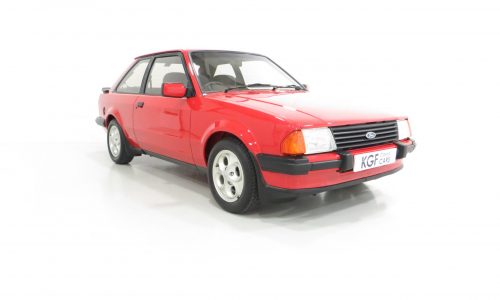 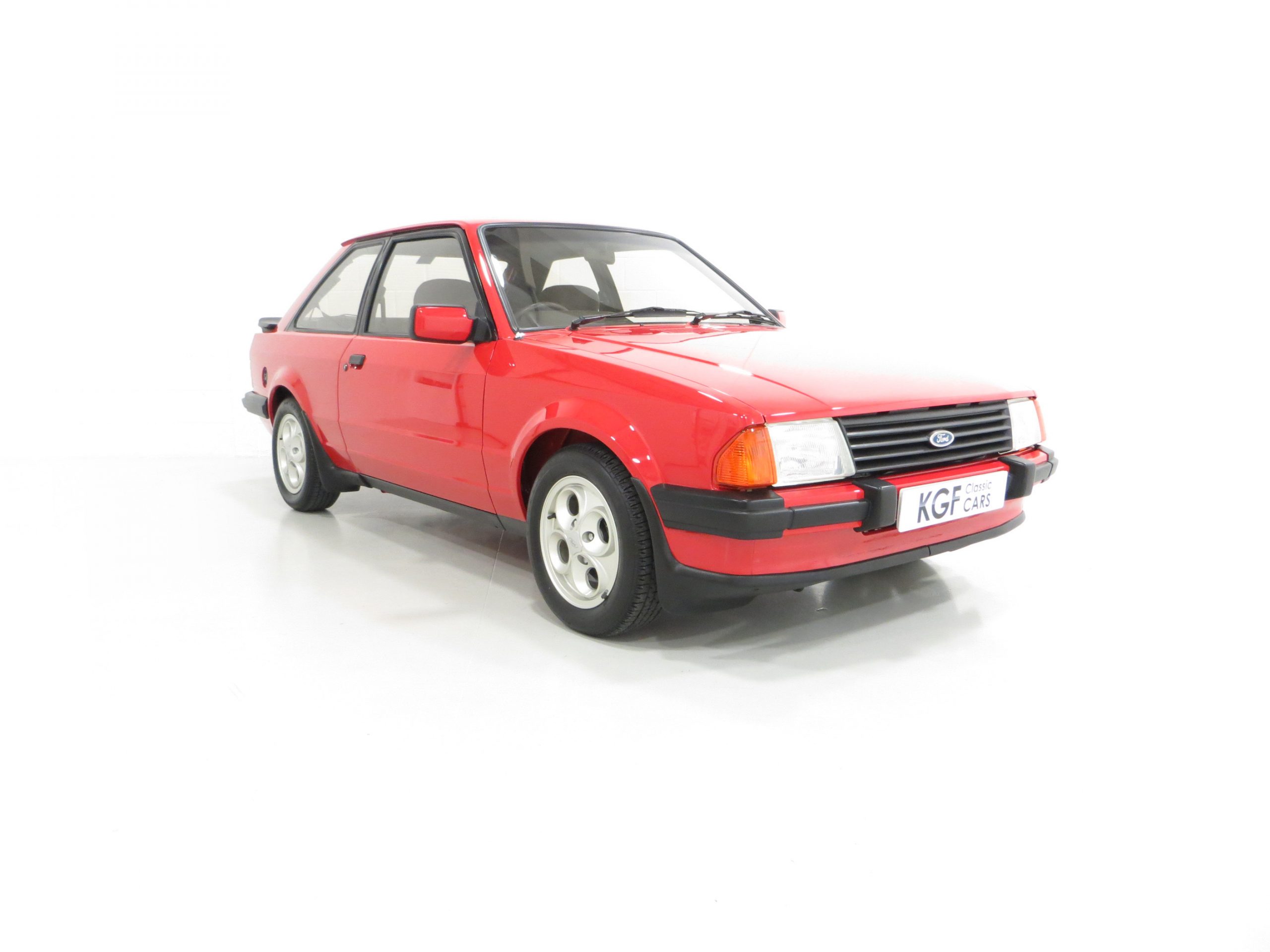 EXTERIOR
This show winning example is finished in the original colour of Rosso Red, (Code R5), a direct replacement for the previous Sunburst Red and available on only the very last Mk3 XR3i’s. The paintwork is incredible with a bright uniform finish and the factory panels remain fitted with stampings visible on the inner wings and all other key hidden areas. A fully detailed underside in body colour is worthy of ‘floor mirror’ display and will wow onlookers, even a genuine Ford exhaust system is still fitted! The trim sections, glass, lights and badges are in excellent order and the supplying dealer rear screen sticker remains fitted. A superb example of this legendary contender in the 1980’s hot hatch war and desired by many now.

INTERIOR
The original Monza and Crushed Velour trim in Grey/Blue, (Code HV), has remained in fantastic preserved condition with bright colours to the seat fabric and the inner foam structures are firm and shapely. The perforated black headlining is unmarked, as are the door cards, and the Shark Grey cut-pile carpeting is clean with only very minimal wear. Incredibly the dash has only one miniscule hairline crack, virtually unheard of and a result of minimal sun exposure and use of dash top covers. All the controls work correctly including the electronic warning system which monitors brake pad wear, coolant levels, low fuel, oil and windscreen washer level. Even the Ford SRT 32P radio cassette operates! A really well preserved, unspoilt 1980’s icon from an era when trim quality was poor and would soon look tired.

ENGINE & TRANSMISSION
Fitted with Fords 1.6 Compound Value angle Hemispherical chamber (CVH) engine with electronic fuel injection, this car sprints along with 105bhp at 6000rpm giving a 0-60 of 8.8 seconds and a top speed of 116mph. The engine bay is pristine and displays clearly prominent factory plates and original stickers and is worthy of the many awards won. Ford aficionados will be pleased to see correct service items such as Motorcraft oil filter, starter motor and hoses. As piece of mind all fluids, belts and brakes have been changed in January 2020 at a cost of £1484.28. The 5-speed manual transmission is light and precise.

WHEELS, TYRES & BRAKES
Five cloverleaf deep sculptured light cast alloy wheels are in fantastic order and fitted with Uniroyal Rallye 185/60 R14 tyres showing masses of tread. Being factory fitment these are perfect for the show scene but not for daily road use. The boot area houses the correct spare wheel alongside the factory supplied jack and brace. The servo assisted brakes with 9.4” ventilated discs up front stop the car well.

HISTORY FILE
Assembled at the Ford Saarlouis Plant, Germany in April 1985 and registered new on the 16th August 1985 on a ‘C’ plate prefix, this very late MK3 XR3i was supplied new by Ford Main Dealers Bristol Street Motors Limited of Birmingham. Previous long term owner, Mr Phillip Woods who in fact has owned the car twice, was a regular attendee on the Ford Fair Concours and show scene in the mid to late 1990’s and the car won many awards. Entered bi-annually in the Ford XR Owners Club National Days in 1996,1997,1998 and 1999, the car won in the Standard Factory Class on all eight occasions with trophies still with the car! The car was always trailered to shows but secretly driven off close to the venue resulting in less preparation time before the show! It was kept in a heated garage at all other times. In 2001, Mr Woods made the decision to sell, something he soon became to regret, but as luck would have it, he spotted a classified advert with it for sale in Edinburgh in 2004 whereby he promptly took a flight from Staffordshire and drove the car home!

A neatly presented history folder contains a huge file of receipts and Ford main dealer invoices as well as previous MOT certificates dating back to the very first in 1988. There are two sets of original keys and one key fits all locks. Sold by KGF Classic Cars to Mark Bailey, creator of the famous Bonkers Collection in January 2020 only to be part-exchanged against our 17,000 mile Series One RS Turbo. This outstanding XR3i will appeal to a serious collector or enthusiast wanting a fabulous proven example of an iconic and fast appreciating icon that has played a huge part in the history of Fast Fords.